Scientists urge Quebec to get its climate act together before election 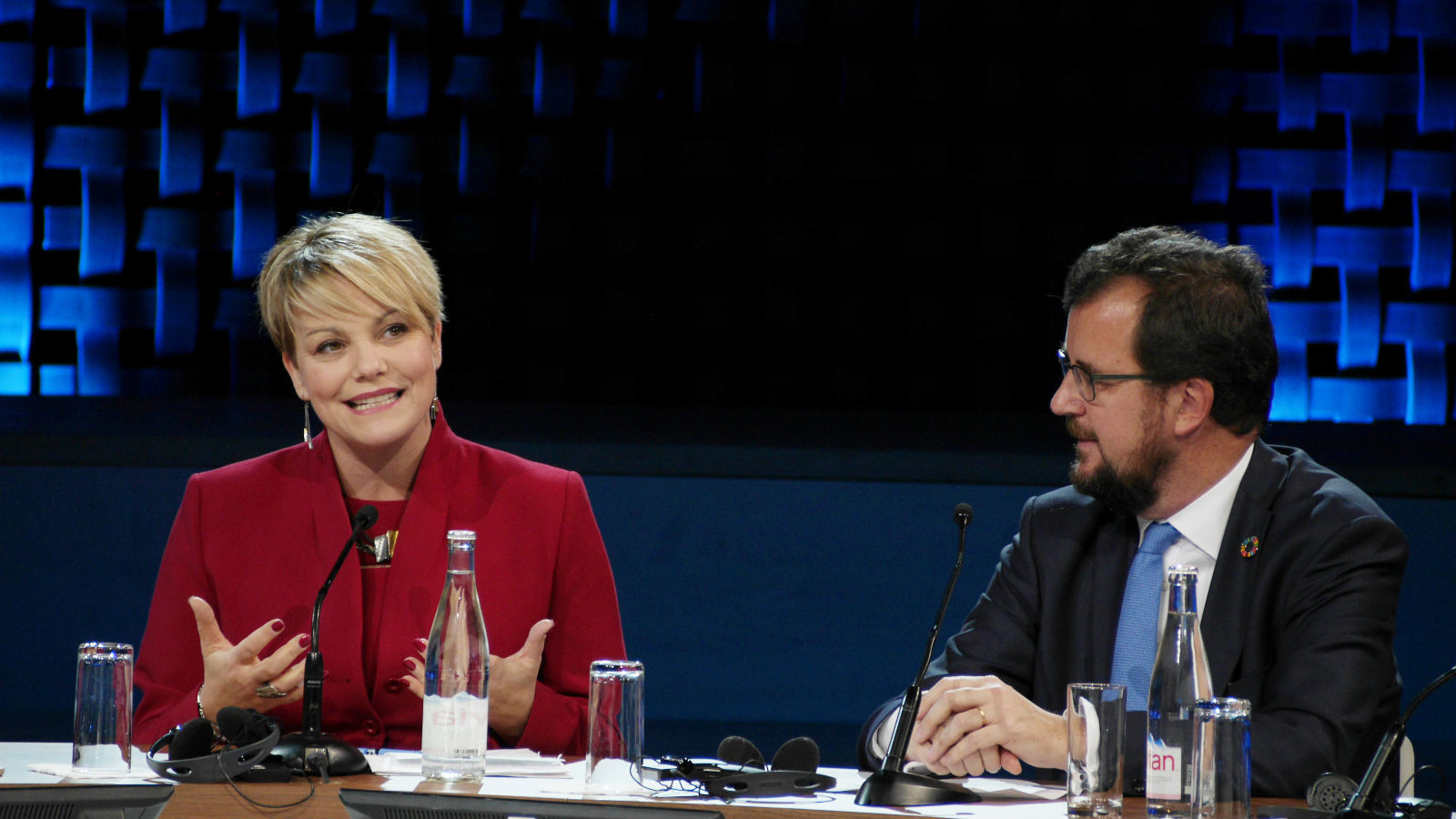 Quebec Environment Minister Isabelle Melançon speaks at One Planet Summit in Paris on Dec. 12, 2017. This week, leading scientists called on the provincial government to come up with a more coherent environmental strategy. Photo by Clothilde Goujard
Previous story
Next story

As Quebec's election draws near, a group of the province's leading scientists are calling on the government to get its act together when it comes to environmental policy-making.

Twenty-four scientists with expertise in finance, politics, water management and forestry launched a project on Tuesday called Climate, the State and Us. The non-partisan, independent information campaign advocates for a more coherent approach to climate action, as the provincial government is struggles to meet its environmental targets.

“It’s a political project in the sense that we want to put on the public stage, and political debate, the need to act more coherently (with our climate policies),” project lead Normand Mousseau told National Observer.

Mousseau is a physics professor at Université de Montréal and academic director of the Institut de l’Énergie Trottier. L'Énergie Trottier is one of two Montreal-based think tanks backing the project, along with Institut du Nouveau Monde and Quebec's chief scientist, Rémi Quirion

Together, they are suggesting what they call “necessary revisions” for more successful environmental governance in Quebec.

Mousseau and his fellow scientists say the provincial government's plan lacks coherence, and progress on combatting climate change has been hindered by incompatible policies developed by departments working separately.

“(The Quebec government) is not coherent at all, at all,” said Mousseau. “We are very, very late because we don’t understand the importance of data, information and science to move forward. We haven’t put any structure to ensure coherence and we don’t have a long term vision.”

He cited a Quebec environment department announcement in October 2015, for example, with a target greenhouse gas emissions reduction of 37.5 per cent by 2030 from the 1990 level. He said six months later, the energy and natural resources department released an energy transition action plan based on a different target reduction of 30 per cent.

“We see that there are coherence problems at all levels,” he said.

Pascale Biron, director of the geography, planning and environment department at Concordia University, made similar remarks at a press conference Tuesday in Montreal.

“A silo approach remains dominant in Quebec with numerous departments or municipalities involved to different extents, but with an absence of integration to respond to more global targets," said Biron, listing flooding as an example.

Experts also recommend the creation of a sustainable development agency to handle funding, the reduction of greenhouse gas emissions, water management, support to innovations, and dialogue between different stakeholders and citizens.

The group envisions a separate committee of experts, in addition, that includes academics who would prepare reports on the progress and achievement of environmental targets.

Too often, said Mousseau, regulators fail to follow-up on and evaluate their policies and targets. The idea to create Climate, the State and Us came from Great Britain, he added, where a committee on climate change made of academics regularly prepares reports on government action.

The group's next step is to take public input into account. Citizens will be able to comment on a web platform on the principles that should guide environmental policy and the ways to put them into place. A forum on environmental governance and climate change in Quebec will then take place at Université de Montréal on April 12 with representatives of political parties, the government, Indigenous groups, municipalities, unions, businessmen and civil society.

Mousseau said involving citizens is important because, with provincial elections approaching, politicians need to see that people are interested. This will push them to address the issue in their campaigns. He also said he hopes the project will provide inspiration to other provinces and the federal government.

“It’s not just Quebec (that is late), it’s the whole of Canada,” he said. “The way we’re managing (the fight against climate change) in all of the provinces is the same, but we need to start somewhere and we chose Quebec.”

The Quebec environment department did not respond to requests for comment before the publication deadline.