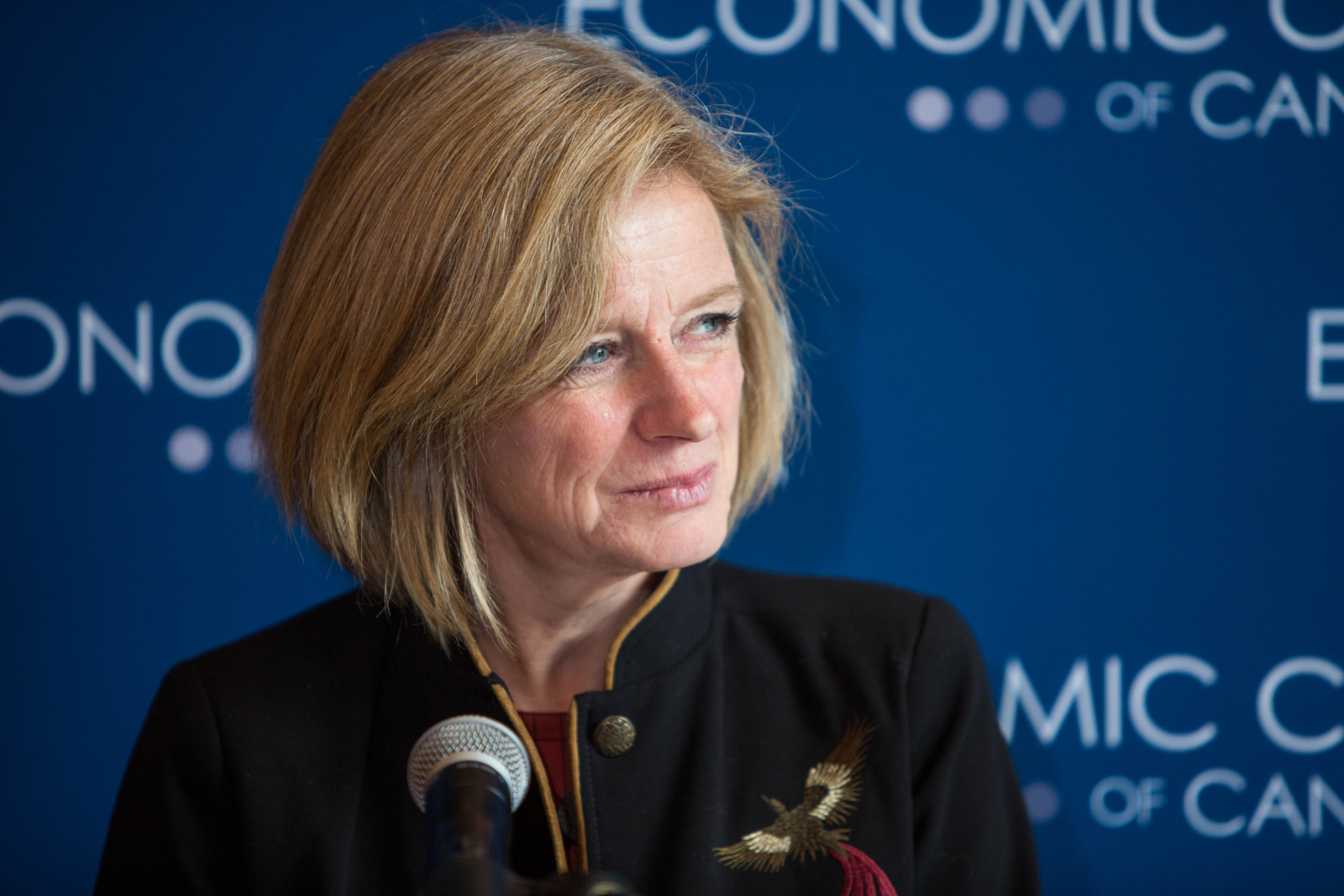 Premier Rachel Notley is signalling that her government plans to accelerate its online warfare in support of a controversial pipeline project.

Speaking to reporters on Monday, Notley explained that this would drive home Alberta's message in the “ongoing dispute that British Columbia has triggered with Alberta and with all Canadians.”

“Albertans (will) be able to engage with people in other parts of the country to help make our point around why this is so important for Canada, for the Canadian economy, for Canada’s environmental progress, for all these issues,” Notley told a press conference in Edmonton, Alta.

Notley offered few details on what exactly the province plans to do next in response to the British Columbia government’s proposal to introduce changes to its Environmental Management Act that could restrict the movement of oil through the province via pipeline or rail, threatening to delay or quash the Trans Mountain pipeline expansion project.

So far, Notley has threatened to ban imported B.C. wines and ceased discussions on electricity with the neighbouring province.

Notley said the next step would involve creating "online tools" asking people to sign up to deliver their message to key political figures, and to share their own stories. The premier has been tweeting out messages in recent days that she has said were from B.C. residents who support the pipeline expansion proposed by Texas-based Kinder Morgan.

From the Inbox: “As a citizen of BC please know I fully support your stand on Kinder Morgan Pipeline Project. As a Canadian citizen I want the federal government to support the project. Thank you and the citizens of Alberta.” – Sandra, Qualicum Beach BC #abpoli #bcpoli

From the Inbox: “While I truly support BC wines and their production, I understand why you made your high profile move against the BC government announcement about the Kinder Morgan pipeline.” – Geoff, Vancouver Island BC #abpoli #bcpoli

But B.C.'s goal of improving scientific research into spills was actually supported by the federal government's Environment Department in 2016.

In January of that year, Environment and Climate Change Canada told the federal pipeline regulator, the National Energy Board, that there were significant "knowledge gaps and uncertainties with respect to hydrocarbon product behaviours in the marine environment," and that the company should commit to funding more research to strengthen spill response planning and risk assessment.

The Trudeau government introduced a $1.5 billion plan to protect Canada's oceans to respond to some of those concerns, but the costs will be covered by taxpayers.

Notley, Alberta's oil companies, business leaders and financial institutions which have invested heavily in the pipeline expansion say that the Kinder Morgan project is a key to growth in the western Canadian oilpatch. Detractors, including First Nations, environmentalists and local B.C. politicians say the project is too risky since it could lead to spills and push Canada's climate change goals out of reach.

During last year’s provincial election in British Columbia, Premier John Horgan said he would use “every tool available” to stop the Kinder Morgan project.

Horgan and Notley are both NDP premiers. Neither is expected to be in Ottawa this weekend for a national NDP convention.

Notley said she appreciated that Kenney, generally, supported her government's approach, but declined his call for MLAs to reconvene in Edmonton. "I think that what we need to do is not be talking to each other inside this building but rather speaking to people across this country about the import of our position."

She said the provincial government had caught the attention of the federal government, and she would wait to see what their next step would be. "I think they are definitely working on finding a solution, and they know we’re serious."

In Ottawa, Natural Resources Minister Jim Carr said the federal government will not entertain any attempts by British Columbia to stall or stop the expansion of the Trans Mountain pipeline.

Carr was responding to a federal Conservative motion calling on the government to use every tool at its disposal to get the pipeline built and report to Parliament on its plans by Feb. 15.

Carr said the Conservatives are trying to manufacture a crisis and that B.C. is very aware Canada can and will do what it takes to exert its authority to have the pipeline built.

Conservative natural resources critic Shannon Stubbs, however, said the government has been all talk and no action to this point and fears the government is happy to let the project die.

Kinder Morgan’s proposal would triple the capacity of the Alberta−B.C. pipeline.

Carr says all B.C. has done thus far is announce a plan to consult its residents about whether more research is needed, and that nothing has been done that should stop the construction of the pipeline.

On Monday the minister was asked whether he would consider a military response to ensure the pipeline goes through; in 2016, Carr was forced to apologize for suggesting that the federal government was prepared to respond with military and police force if opponents broke the law to block oil pipeline projects in Western Canada.

"I have said all along that we live in a country that enjoys all of the freedoms to protest. Civil disobedience is part of who we are as a nation and it's a very important value," Carr told reporters outside the House of Commons.

This evolving story is

This evolving story is beginning to look like the 1980's battle between the feds and Alberta over the NEP (National Energy Program). A summary of that can be found here: http://www.thecanadianencyclopedia.ca/en/article/national-energy-program/

In the 1980's the world price of oil was expected to rise, and it didn't. So the issue died away quietly, although it did leave Albertans in an angry mood which led to a succession of hyper-Conservative political leaders taking advantage of the anger.

The burning of fossil fuels for energy is going to diminish as the world grapples with Climate Change and Anthropogenic Global Warming. Like coal, the phase-out process will make the investment a stranded asset. The big minds in Canada need to work on how to position for a future that doesn't consume fossil remains for energy.

Excellent idea. If she opens

Excellent idea. If she opens that "toolbox" as she calls it, she will be getting plenty of feedback, as social media is a 2 way street.

Excellent idea. If she opens

Excellent idea. If she opens that "toolbox" as she calls it, she will be getting plenty of feedback, as social media is a 2 way street.

Tar sands is the dirtiest oil

Tar sands is the dirtiest oil on the planet . It's unfortunate that this project was even started . Alberta jumped on the oil wagon with tar sands as the demand for oil falls. We are entering an Era where oil will be less and less in demand. Thankfully let's hope it's not to late for the planet .

The positions of Notley and

The positions of Notley and the Feds (esp Trudeau) are embarrassing for any Canadian who understands that (a) an awful lot of fossil fuel resources must be left in the ground if we are to avoid catastrophic climate change, (b) that you can't attack this problem by increasing production of fossil fuels (and the pipelines to market them, (c that line C and Keystone X-L will more than handle the excessive increase in oil sands production allowed by Alberta, (d) the total hypocrisy of ignoring FN claims despite flowery public statements to turn the page on this, and (e) a major spill of trans mountain dilbit on land or sea will impose enormous costs, and taxpayers will be stuck with enormous bills for ineffective cleanup as the company involved escape responsibility. Where are the adults? Horgan and co, with their decision on Site C, and continued promotion of LNG and failure to set out a strong strategy for renewables are guilty of the same hypocrisy. One weeps.

Goes to show you how bad it

Goes to show you how bad it is that they do not want BC to do the real Science on "TAR in the Salt-Chuck". Looks like it means the results are not in Alberta's favour, thus the Smoke-Screen by the NEB.