By Dolores Bazil | Opinion, Politics | February 14th 2018
#20 of 55 articles from the Special Report: Letters to the Editor 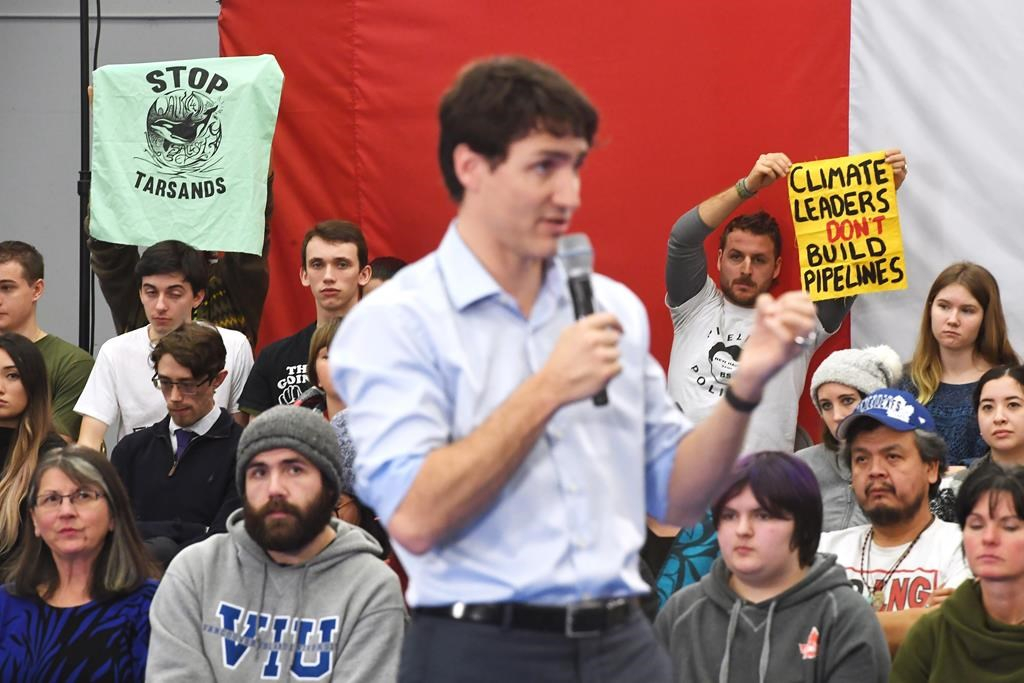 Prime Minister Justin Trudeau addresses the audience at a town hall in Nanaimo, B.C. on Feb. 2, 2018. Photo by The Canadian Press/Jonathan Hayward
Previous story
Next story

I am a member of the Wet'suwet'en First Nation. I see climate change as legitimate. I see protesting to protect our Pacific coast from oil spills and fish farms as legitimate.

I also appreciate the difficult job Prime Minister Justin Trudeau has, to make decisions as he did on the Kinder Morgan Trans Mountain pipeline expansion project.

I want to point out that even without oil spills that may happen in the future, we've already lost some seafoods, including sockeye salmon, clams and abalone. What is the cause of this? We as a people, of all nations, may chastise the oil industry, but that doesn't stop us from buying a new car with eager excitement.

If we are going to address these issues we have to do it as a collective with a plan. All I saw from the town hall in Nanaimo on Feb. 2 were placards and yelling at a prime minister who came to our part of the country to speak to us. There have to be more effective ways to deal with these issues.

I also want to speak to the chiefs who say they were offended that they were not acknowledged by the prime minister as they sat in their regalia in front of him, so they got up and left. Did they go up to the microphone to speak? If you want to be heard, stand up and take the mic, that was the process. Be leaders, do not behave in a passive-aggressive manner, no disrespect intended. Don't get me wrong: I respect all the chiefs of all the nations in British Columbia, but we need to act from reason, not so much from emotion.

As an Indigenous person I am angry about a lot of atrocities against our people, our rights and our land. I also enjoy a free education, housing, healthcare and cheap cigarettes and do realize these freebies keep a lot of our people quiet and complacent on how much we are still losing.

My position is that the prime minister is doing the best he can and I don't see him as a liar. I see him as a breath of fresh air from the three terms of former prime minister Stephen Harper and his Conservatives. How easily we forget that under the Harper government, we as Indigenous peoples, when we organized, were considered "terrorists."

Trudeau is way more palatable than Harper dared to be. See it from his point of view and quit wasting your energy yelling and being easily offended. Instead, organize and work towards climate change, land claims and maintaining a pristine coast where our food supply is restored.

I strive toward a middle ground for everyone and building up alternative energies. We can do it. We need to work together, and it doesn't hurt to use the organizations that are already in place.

Thank you, Dolores Brazil, for a thoughtful opinion. I agree that the shouting is not productive. We need to show Prime Minister Trudeau the depth of the opposition to this pipeline, but a few people shouting is not effective.

An excellent position for all

An excellent position for all of us to take. Anger and vitriol only harden the divides between us. But we will all suffer the effects of climate change, and maybe we should thank the Great Mother for giving us this opportunity to let go of old jealousies and hatreds. Because in fact, we can no longer afford them. Climate change is a reality, and if it is coming on as fast as the experts say (faster than they actually predicted years ago....scientists being conservative by nature) than we can't afford to pump bitumen for another forty years.

So let's honour both Trudeau, and Rachel Notley, for all they are trying to do to turn our ship around, and Organize in ways that guarantee the preservation of our land and water, our coastline and our seafood.

It's the only course of action that makes long term sense....and there are so many good organizations we can donate to, so many worthy actions we can be part of. We just have to decide to DO IT.