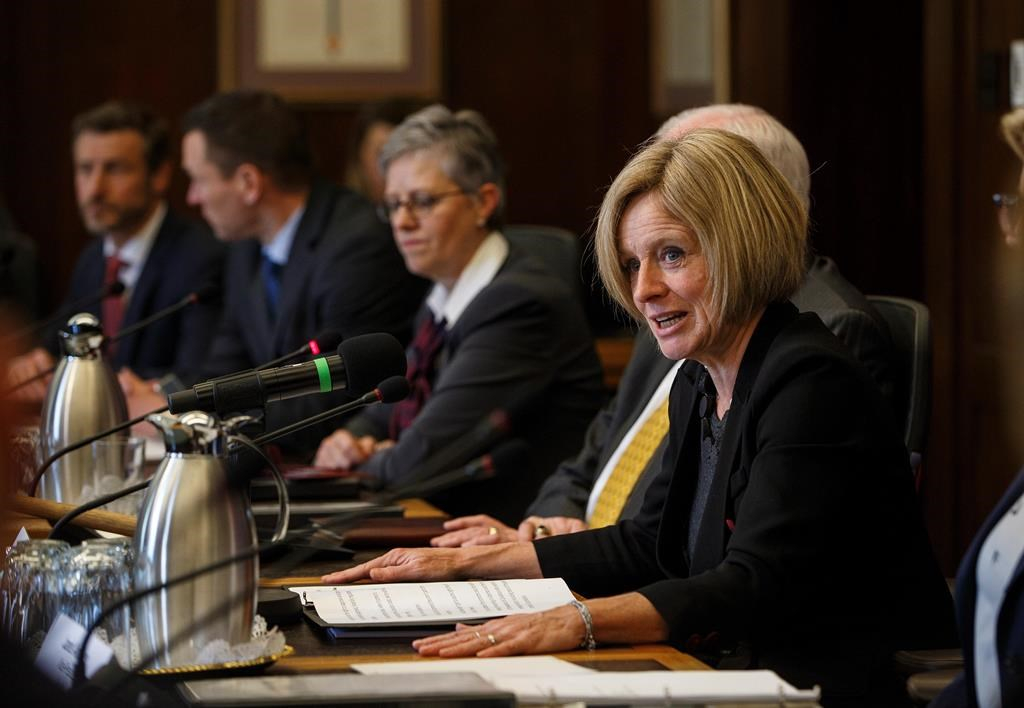 Alberta Premier Rachel Notley makes remarks before the first meeting of the Market Access Task Force, convened to respond to B.C. in the fight over the Trans Mountain oil pipeline, in Edmonton, Alta. on Feb. 14, 2018. Photo by The Canadian Press
Previous story
Next story

"We're going to keep the pressure on," Notley told reporters prior to convening the group's first meeting, in the cabinet room at the legislature.

"These folks on our task force have deep connections across the country — industry, investors, academics, the legal community (and) all levels of government.

"I'm going to be looking to this task force ... to provide additional legal and strategic advice to make sure we can end the delays, end the games and get the Trans Mountain pipeline built."

It's the latest salvo by Notley in a dispute that has inflamed tensions between the NDP governments in both provinces, and sent federal officials scurrying to B.C. to try to find a solution.

It began two weeks ago when B.C. Premier John Horgan's government announced a ban on taking added levels of oil through pipelines while it studies safety issues.

Notley's government views that as a back door plan to kill the financial viability of the Kinder Morgan project that would expand the existing Trans Mountain pipeline that runs from Edmonton to Burnaby.

Horgan appeared to soften his approach this week. His government originally announced that the ban on taking extra oil would be in place while the province studies spill safety measures.

But on Tuesday Horgan told reporters it was never the intention to have the ban in place during consultation.

Notley told reporters that, as far as Alberta is concerned, nothing has changed: "The B.C. government has not backed away from that threat, as we believe they must," she said.

In retaliation, Notley has cut off talks to purchase $500 million worth of electricity from B.C., banned wine from that province and launched an online petition for Canadian citizens to voice their displeasure to Horgan.

Earlier this week, Notley said she is giving the federal government a few days to make headway with B.C. before deciding on further action. She said the ban is unconstitutional and that Ottawa, not the provinces, has the final say on interprovincial infrastructure like pipelines.

Prime Minister Justin Trudeau's government said the Trans Mountain line will get built, and noted that B.C. has put nothing official in place.

Notley, however, has said even the threat of squeezing oil deliveries has an impact on the pipeline and the marketplace, and is demanding Ottawa get B.C. to reverse course.

The $7.4-billion project would twin the existing 1,150-km line in order to triple capacity. Trudeau's government gave the green light to the pipeline in late 2016, saying the project is in the national interest, but Kinder Morgan Canada has since encountered renewed resistance and bureaucratic delays in B.C.

Alberta has maintained it's critical for its economy, and for Canada, to get more oil to a coastal ports to fetch better prices in Asian markets and reduce the transport bottlenecks that force Alberta's oil to sell at a discount — sometimes a steep discount — compared with the North American West Texas Intermediate benchmark price.

Horgan's minority government has fought against the pipeline and says the ban on increased levels of diluted bitumen is strictly about environmental protection.

“Alberta has maintained it's

“Alberta has maintained it's critical for its economy, and for Canada, to get more oil to a coastal ports to fetch better prices in Asian markets and reduce the transport bottlenecks that force Alberta's oil to sell at a discount — sometimes a steep discount — compared with the North American West Texas Intermediate benchmark price.”

This makes no sense to me. Firstly, none of the the Alberta oil is now going to Asia. It is all going to the USA, by pipeline or tanker. It would be going to Asia if there was a higher price available there. Secondly, the price usually goes down with increase in quantity, not up as insinuated here.

Would someone please explain.