By Laurie Adkin  | Opinion, Energy, Politics | February 5th 2018
#19 of 55 articles from the Special Report: Letters to the Editor 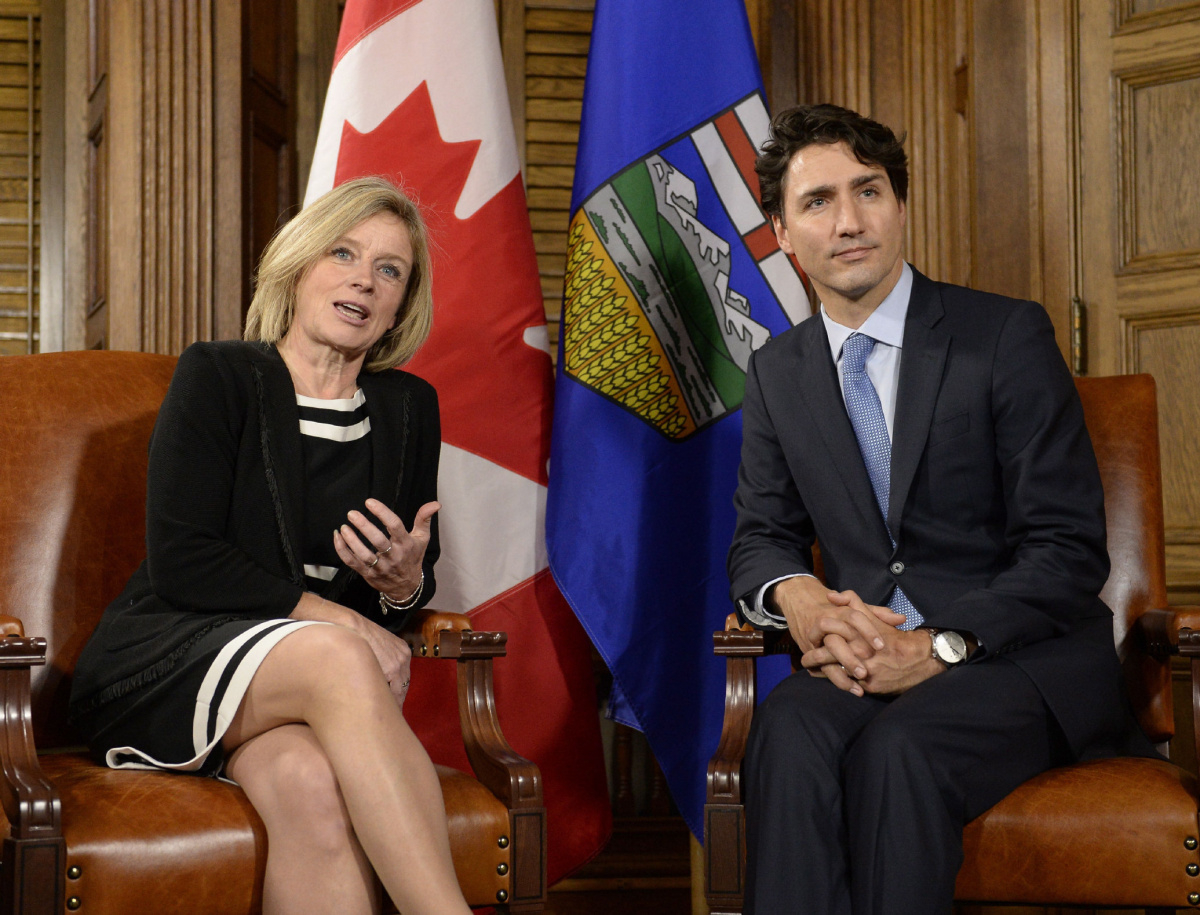 Premier Rachel Notley is clearly frustrated by British Columbia’s new obstacles to the expansion of pipeline capacity for transporting Alberta’s diluted bitumen to the coast and on to markets in Asia.

She is threatening to take B.C. to court and calling upon the federal government to step in to police the completion of the pipeline expansion. In short, the Alberta government seeks to turn this conflict into a constitutional crisis, while arguing that the entire country—B.C. included—has an interest in letting the Kinder Morgan Trans Mountain expansion project go ahead.

Her framing of the situation, however, is based on a set of questionable claims and assumptions. She frames it as a conflict between, on the one hand, a rogue and lawless B.C. government acting under pressure from the BC Greens, and, on the other hand, the sensible, law-abiding governments of the rest of Canada which put the interests of jobs and prosperity first.

The B.C. government’s draft regulations address spill response times, geographic response plans, and restitution to local communities in the event of spills of diluted bitumen on land or in coastal waters, and include a plan to appoint a scientific advisory panel.

Notley has blasted the proposals as "political game-playing," "a whim," "a threat to millions" of jobs in Alberta and elsewhere in Canada. She says these are actions that will diminish investors’ confidence in the predictability of their returns on investment in Canada.

Independent scientists not on board

The premier further questions the B.C. government’s jurisdictional authority to bring forward new environmental regulations on a project that has undergone National Energy Board review and received federal cabinet approval.

Even if all the claims of the Alberta government were true, they would be missing an unavoidable reality that calls for an entirely different approach to the current conflict.

While proponents of the Trans Mountain pipeline expansion claim that all the science has been done, and assurances have been given to the federal government that any spills can and will be cleaned up (or compensated for) in a satisfactory manner, such claims have not been accepted by independent scientists.

Also, concerns have been raised by regulators in both BC and Washington State about the secrecy of the information upon which the federal cabinet’s approval was based. There are real environmental risks attached to spills of crude oil, emulsified bitumen, and diluted bitumen, and past spills have cast doubt on the ability of existing methods to remediate contaminated sites (Exxon Valdez, anyone?).

There is another way, and if we want to be a country built on solidarity, mutual aid, and ecological sustainability, this is the path we must take, writes @LaurieAdkin

Moreover, the costs of a major spill affecting coastal British Columbia – considering the importance of fisheries and tourism to that province’s economy—are no less significant than the costs to Alberta of foregone revenue from increased bitumen exports to China.

Many would view the B.C. government’s desire to ascertain the feasibility and costs of remediating such spills as prudent. Alberta governments have been content to allow the environmental liabilities of oil and gas extraction to build up over decades without an adequate system in place to ensure that Alberta citizens will not be saddled with the clean-up costs; other governments may well take another approach.

Whole communities could lose their livelihoods

Few are more aware of this than the Indigenous communities located in proximity to the pipeline route and on the coast, and if we are to speak of constitutional issues, this should include those raised by the federal government’s decision to override the opposition to the Trans Mountain project on the part of multiple First Nations.

Then there is the claim that Alberta’s bitumen will command higher prices in China or in other Asian markets than it does in the United States—the claim that underpins the Alberta government’s campaign to get the pipeline expansion completed. Here again there is substantial disagreement on the part of energy economists about whether this is a realistic expectation.

Evidently, the company owning and operating the pipeline will make money, but should the government of Alberta view the tanker route to China as the pathway to greater royalty revenue?

Even if the price differential turns out to be significant for some years, will the benefits of this revenue outweigh the serious (possibly irremediable) environmental risks associated with increased tanker traffic in the Juan de Fuca Strait and indeed along the entire oceanic route taken by these ships? Have we not just witnessed a catastrophic oil tanker accident near the coast of China?

Environmentalists have been trying hard to bring to the public’s attention the endangered status of orca whales and other marine life. Even without an oil spill, the orcas suffer mortality from the existing tanker traffic. While the federal government has jurisdiction over inter-provincial transportation, it also has responsibility for species at risk and protection of oceans and waterways from pollution.

If Alberta 'wins' local battle, it will lose to global changes

Finally, we must ask about the implications of the tripling of the flow of diluted bitumen from the oilsands to the terminal in Burnaby for Canada’s obligation to reduce its greenhouse gas emissions. As environmentalists have argued, building more infrastructure for the extraction and transportation of fossil fuels runs counter to the goal of accelerating a transition to a post-carbon global economy.

The repeated assertions by some provincial governments, the federal government, and many business associations that we can somehow have our cake (produce and export more oil) and eat it, too (reduce our greenhouse gas emissions) is unconvincing. No technological wizardry can negate the impact of a 50 per cent increase in oilsands production between 2016 and 2026.

This reality does, indeed, present a very large problem for the government of Alberta, because so much employment in this province is directly or indirectly dependent on oil and gas extraction—not to mention provincial government revenue, which has nose-dived since oil prices fell in 2014. But sounding the war cry against the government of B.C.—which is, after all, only trying to protect the interests of its own citizens—is an ill-fated strategy to solve Alberta’s revenue and employment problems.

Even if Alberta “wins” this battle, it will soon meet irresistible forces of global change. Divestment from heavy crude oil production is accelerating and global warming has made rapid decarbonization of our economies imperative.

So what is the alternative? Alberta’s problem is all of Canada’s problem. Canada needs to reduce its GHG emissions rapidly and deeply, if we are to do our fair share to stave off the worst scenarios of global warming. We must do this, because it is simply unethical to shift this burden onto future generations and onto people elsewhere in the world who have fewer means to make this transition and who will suffer far more from the consequences of failure. We are all in this together.

Rather than having the provinces at one another’s throats, vying for favouritism with Ottawa over who should bear the costs of phasing out fossil fuel production and investing in new energy systems and transportation and production infrastructures, all governments need to work together to create a transition plan that shares costs and compensates for regionally uneven employment and revenue effects.

Alberta cannot be expected to make this transition overnight and without assistance. British Columbia cannot be expected to put its peoples’ livelihoods and environment at greater risk to accommodate increased bitumen export. There is another way, and if we want to be a country built on solidarity, mutual aid, and ecological sustainability, this is the path we must take.

Thank you for presenting this

Thank you for presenting this case so well.

In the words of Isaiah, "Come

In the words of Isaiah, "Come now, let us reason together". Let's talk about our collective path to sustainability.

Millions of jobs coming from

Millions of jobs coming from Kinder Morgan? Very disappointing to have this bs coming from Premier Notley’s government. Alberta is in deep with our unblinking commitment to tar sands exploitation. If we think this is a tough lesson Wait ‘till we see the one the that’s coming from the world markets who will leave us behind to clean up our tailings ponds with no help at all. Fossil fuel is a dying industry. Everybody knows it except it’s producers. Been to Houston lately? Tried to insure a house there? I predict Miami Beach will change it’s name to Miami Wall before I leave this world. And like it or not that won’t be long.

The Prime Minister made it

The Prime Minister made it quite clear that he made an agreement with the Premier of Alberta: she would agree to a carbon tax and he would support the Kinder Morgan pipeline. BC should have been, but was not, a party to such an agreement. This was fundamentally wrong.

There are several statements made by Trudeau and Notley which are misleading. The current situation is that there is unused capacity to ship oil from rhe Burnaby Kinder Morgan terminal. There used to be five tankers a month and now there are about one quarter of that, and those tankers all go to the USA. Any statement that they can get a better price in Asia is evidently wrong.

Note, "Jacobson and his colleagues said that a remaining challenge of implementing their roadmaps is that they require coordination across political boundaries."