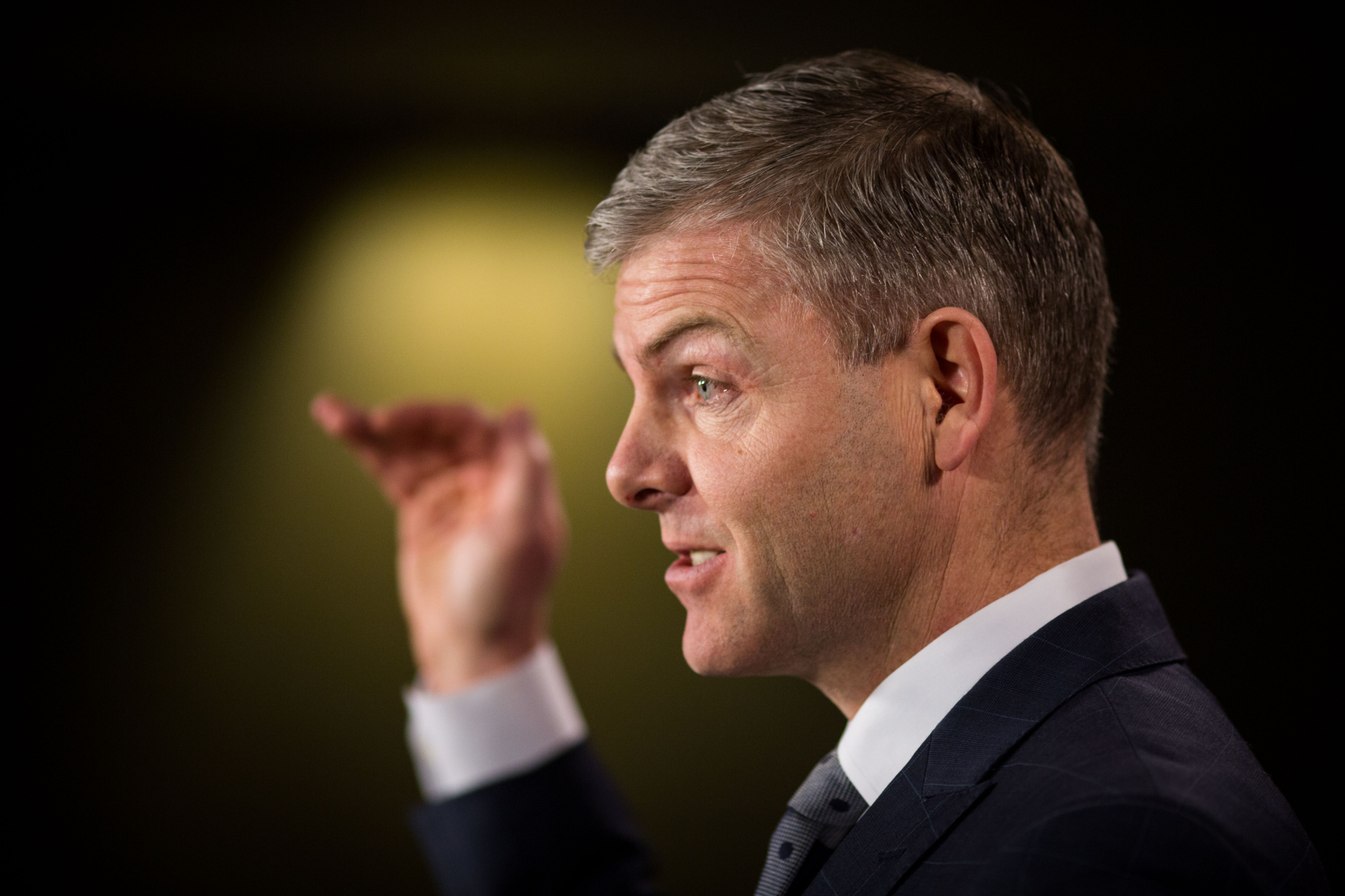 Canada’s main oil and gas lobby group has a vision for the country — and it involves getting foreign nations hooked on more and more Canadian fossil fuels.

As the Trudeau government moves forward with its plans to price carbon pollution, cut environmentally harmful gas leaks from industry and encourage the growth of the clean technology sector, a new report from the Canadian Association of Petroleum Producers argues the Liberals should be focusing their efforts on getting fossil fuels to emerging economies.

“We know we live in a growing world that is going to need more energy, and we know that Canada has [oil and gas] reserves and can be an increased supplier,” said Tim McMillan, the group’s president, at a press conference Feb. 26 on Parliament Hill.

“As an environmentally responsible person, I want to see Canada stepping in to be that supplier, not Nigeria or Iran.”

Prime Minister Justin Trudeau, who has been campaigning in support of Texas-based Kinder Morgan's Trans Mountain pipeline expansion to be built, told National Observer this month that his approval of "was always a trade off" with climate-friendly policies in Alberta. Trudeau's position has sparked anger among some Indigenous, municipal and environmental leaders, particularly in British Columbia, who say the oil pipeline expansion project is too risky since it will likely lead to spills and push Canada's climate change goals out of reach.

'Irresponsible' to base polices on oil-free world: CAPP

Canada is currently on track to miss its Paris climate agreement target of cutting emissions 30 per cent below 2005 levels by 2030, without much more aggressive action. Newly-released projections show Canada will over-pollute by 125 million tonnes of carbon emissions, with rising pollution from the oilsands a major factor.

But McMillan said it was “irresponsible” for Canadian governments to forge policies “based on a world that has less oil and gas.”

He said the “scope and pace” of new federal and provincial rules aimed at cutting carbon pollution is creating “investor uncertainty” in Canada and an “undermining of investor confidence” in Canadian natural resources. CAPP has particularly been critical of efforts to cut methane pollution in the oilpatch, despite government research showing that these new rules would benefit the economy-at-large.

“Investment banks are putting out literature that largely says Canada is not a place to invest today,” said McMillan. “That is damaging, and will be damaging to jobs and opportunity in our country. We have to reverse that.”

Asked which investment banks he was referring to, McMillan said “there was an article in the Financial Post over the weekend — [and] I’ve seen several reports out over the last few weeks about Canada’s ability to attract capital and their interest in investing in Canada."

Bloomberg News has quoted a Toronto hedge fund, and other asset managers expressing skepticism about the viability of major future oilsands projects. Canadian energy markets have also been dealing with low prices since 2014, and the main oilsands grade of oil is still trading at a major discount.

Many leading economists, including Bank of England Governor Mark Carney — also the former governor of the Bank of Canada — have warned that the vast majority of the planet's oil, gas and coal reserves are "unburnable" due to climate change. As a result, Carney said investors face "potentially huge" losses from emerging global policies to crack down on fossil fuels and carbon pollution.

McMillan was speaking ahead of Tuesday’s federal budget, which he said he will be looking to for signals from the federal government that “the landscape has changed” with the Trump administration now in place. The White House has been busy slashing environmental protections and rolling back fossil fuel regulations.

He said CAPP was “frustrated” that the federal government proposed a removal of tax breaks for resource development in last year's budget. He was also unhappy that this was considered to be a removal of "subsidies" to the industry, since the industry believes they are needed to boost profits and attract new investments.

CAPP called on the government to establish a “four-part vision” for the fossil fuel sector. This includes: getting oil and gas to markets abroad; “competitive” policies to attract capital; policies to “accelerate innovation and technology” in the sector, and making climate policies “comparable to other jurisdictions.”

Although the Trump administration has moved to scrap Obama-era rules, they are running into legal roadblocks on methane emissions, as a U.S. District Court judge recently blocked a planned suspension of the rules.

As well, some jurisdictions in the United States, such as California, already have carbon pricing in place. Ontario joined the Quebec-California carbon market on Jan. 1, allowing the three state and provincial governments to jointly hold auctions of carbon pollution allowances.

Asked what jurisdictions he had in mind for comparing climate policies, McMillan noted how large oil-producing states like Texas and Oklahoma don’t have methane rules in place yet.

“We partnered with the U.S. with methane regulations, but they pulled back,” he said.

CAPP has been sounding the alarm about federal and provincial efforts to crack down on methane, a powerful greenhouse gas, saying rules must be weakened in Alberta or thousands of jobs will be at risk.

But the group's analysis clashes with federal government calculations, which projects a surplus of billions of dollars due to avoided climate change costs.

“Canada really stands alone in global energy producers. If you look at the world’s top 10 energy producers, none have a price on carbon. Nor do I think that Canada should compare ourselves to Saudi Arabia, Nigeria, Venezuela, Iraq, Iran — we are a different country,” said McMillan.

“That’s why I say comparable — we don’t necessarily have to adopt the policies of other countries, but we certainly have to be understanding of them, and recognize that if we put policies in place here that are so inconsistent with our competitors, we will achieve nothing other than loss of jobs and investment in Canada.”

No matter what Notley does to

No matter what Notley does to it, it remains nothing but DIRTY OIL.
Is a substantial amount of this investment going to research spill mitigation of of this "upgraded" bitumen?
Not bloody likely.

Great to know that at least

Great to know that at least the bankers and investors are starting to get their heads out of the tar sands. Most of it must be left in the ground!

As a small investor, I took

As a small investor, I took action to divest from fossil fuel production and have not suffered. I recommend taking a close look at how much 'energy' is in your mutual fund investment. It's easy to divest. Look for alternatives. No one is saying we will all have to ride bicycles. The transition will take time, but now is the time to begin if you haven't already. Oh, and the leadership of CAPP, well don't give them too much credit.

The "jobs and the economy"

The "jobs and the economy" arguments that CAPP is using to hold us all hostage make very little sense. Climate change will devastate our economy if we don't act now, and the real place where jobs are increasing is in renewables. We do other countries no favour by sending them our oil and gas, extracted at huge environmental cost for us and the entire planet.

The position of CAPP and Ms.

The position of CAPP and Ms. Notley and others is remarkably similar to the bitter and successful rearguard action that the tobacco industry fought, for decades on end. Remember "9 out of 10 doctors recommend Camels" and "You've come a long ways baby" and the ongoing uncertainty about whether cigarettes REALLY caused cancer? Today the hydrocarbons industry has far greater resources to fund these kinds of mind bending distortions of reality. And their control of most mainstream media helps ensure the reality of climate change and its devastating effects remain foggy science fiction for most people. If a country like Canada, with all our immense advantages and privileges can't stand up to this deadly cabal, who will? The opposition needs to ramp up its efforts. Maybe standing up to Kinder Morgan, those erstwhile Enron Energy thugs, will be the turning point...

"As an environmentally responsible person, I want to see Canada stepping in to be that supplier, not Nigeria or Iran.” This is from the Ezra Levant school of ethics. There is no evidence that Canadian oil is cleaner than Nigerian or Iranian. In fact our tar is dirtier. So let's not delude ourselves. Let's not avoid our responsibility for climate chaos by striving to be "comparable" to other jurisdictions. That's a formula for gridlock. If we cared for future generations we'd be leading the movement to reduce emissions. Instead we're whining about some timid attempts at regulating them

Is there really any reason

Is there really any reason that we should listen to an oil lobbyist? Do you think that his motives might be suspect or his reasoning self-serving?

So, it’s “irresponsible to

So, it’s “irresponsible to base policy on an oil free world” but OK to encourage increased extraction and shipping of the fossil fuels driving our climate crisis. Clearly CAPP is prepared to destroy our life-sustaining climate and biosphere in order to extract as much profit as possible. Seems to me that ithe real irresponsibility lies in allowing CAPP members continued access to the unburnable public resources that climate science is clearly telling us must be kept in the ground. Wake up Tim McMillan before you and your buddies condemn future generations to a hell on earth.

Anyone else just exhausted

Anyone else just exhausted and thoroughly disgusted by the pervasiveness and depth of evil demonstrated by these tar-con greedheads?

CAPP functions like a drug cartel making and marketing fentanyl, killing thousands of human beings each and every year, arguing that since thousands of their people earn their living in the trade, that it would be irresponsible for government to intervene and restrict their business model:
this pill will kill,
putting money in the till,
profits up, lives lost,
just another business cost!