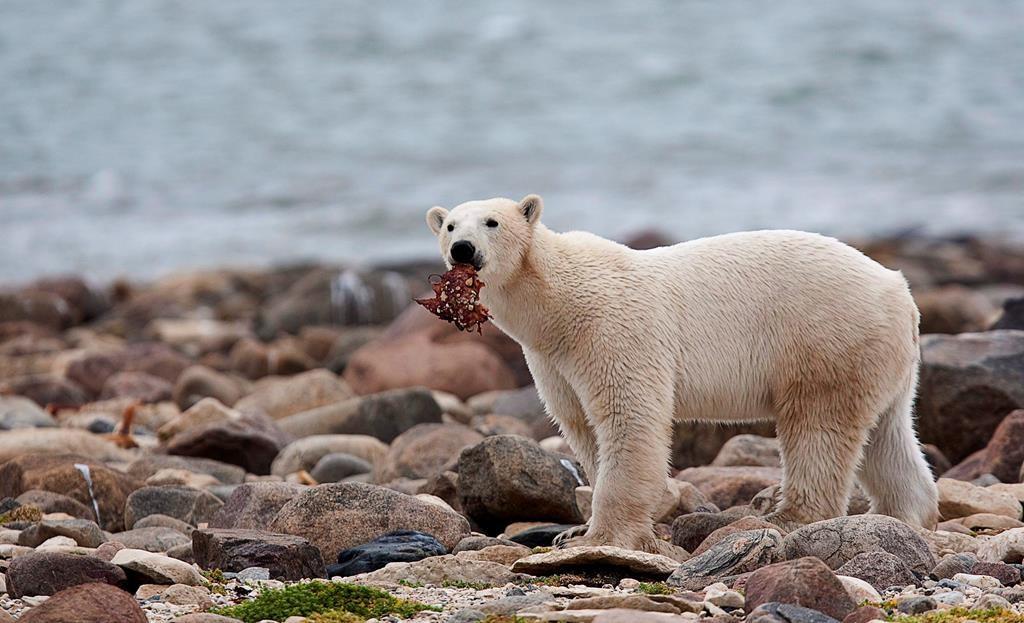 A male polar bear eats a piece of whale meat as it walks along the shore of Hudson Bay near Churchill, Man., on August 23, 2010. File photo by The Canadian Press/Sean Kilpatrick
Previous story
Next story

The 2018 federal budget promises $1.3 billion over five years to protect land, water, and species at risk. This includes the creation of a new Nature Fund to target more private land for conservation, as the country struggles with a loss of biodiversity that has accelerated since the 1970s.

"Canada is one of the most beautiful places on Earth. It’s up to all of us to help keep it that way," said Finance Minister Bill Morneau, introducing the budget in the House of Commons.

At the same time, the budget is vague on how much Canada will spend as part of an international commitment to help developing countries cope and adapt to the damage caused by climate change. The budget suggests that this spending could be funded out of a general international fund, but makes no firm commitments.

It does, however, promise around $120 million over five years to help administer climate initatives that have already been announced.

Ottawa will be kicking in $500 million for a new Nature Fund, which it expects will also be funded by provinces, as well as for-profit and non-profit organizations, up to $1 billion.

The new fund will support species protection efforts in the provinces and territories, and help build Indigenous capacity to conserve land and the species on them.

"The nature fund is an innovative approach to ensure that federal dollars are well-spent through partnerships with provinces, private sector, and foundations," said Hazell.

Megan Leslie, the president of World Wildlife Fund Canada, said WWF was pleased with what was in the budget.

"The fact that it is even in the budget is very important," said Leslie in an interview on Parliament Hill. "It signals that this government cares about wildlife loss and biodiversity loss."

But she added the organization will be looking for how the money breaks down.

"It seems to be heavily weighted so that more than half of that money comes after 2019," she said. "The cynical side of me would say, after the election."

The budget promise comes as Canada struggles to achieve its international commitment under a biodiversity treaty to conserve at least 17 per cent of its land and inland waters by 2020. The country is currently at 10 per cent.

Canada is losing biodiversity: a WWF Canada study shows half of Canada's wildlife has been lost since 1972. Leslie said the organization's research showed the Species At Risk Act was not doing its job.

She praised Fisheries Minister Dominic LeBlanc's efforts on marine protection since 2015, but wondered how the budget's funding would specifically address species at risk.

"If we're going to be successful at protecting species at risk, we do need to have a budget line specifically for that issue," she said.

The budget does make some specific commitments on wildlife. For one, it promises $167.4 million over five years, starting in 2018–19, to protect whales. The southern resident killer whale, the North Atlantic right whale and the St. Lawrence beluga are all at risk, due to ship noise and water pollution.

And it promises up to $74.75 million over five years, starting in 2018–19 — and depending on a cost-sharing plan with industry, to prevent the spread of spruce budworm, which damages spruce trees.

Budworms are naturally occurring, and have been a major problem on Cape Breton and the eastern coast in general. They have traditionally been tackled with a combination of pesticides and the introduction of other species to counteract their spread.

What happened to international climate financing?

Under the Paris climate agreement, Canada had committed to spend hundreds of millions of dollars on helping vulnerable countries adapt to the destructive effects of climate change — at least US$100 billion a year between 2020 and 2025.

Environmental groups allied under the Green Budget Coalition were hoping Canada would go further than past commitments, spending from $2.8 billion to $3.7 billion annually, and leveraging private sector money.

These group argue that industrialized countries, such as Canada, are largely responsible for creating climate change, and also are best placed to help fix the problem.

The 2018 budget does contain a five-year, $2-billion "international assistance" fund covering everything from "peace and security" to "human dignity," that it hinted could also cover climate financing — but the government hasn't made any decisions on that yet.

But even if a significant chunk of that $2 billion was spent on international climate financing, it would still be below the current contribution ratio. In 2015, Canada committed $2.65 billion on a cash basis by 2020 — about $800 million per year by 2020-21. That, the Green Budget Coalition says, is "insufficient" to reach a fair share of this international fund.

Instead, the 2018 budget commits $20 million over five years, starting in 2018–19, through Environment and Climate Change Canada to "engage external experts to assess the effectiveness of its measures and identify best practices."

It also commits $109 million over five years, starting in 2017–18, to Canada's tax agency and the environmental department to "implement, administer and enforce" Canada's carbon pollution pricing.

How Canada is planning on spending its low-carbon fund...so far

Farmers, foresters and energy retrofitters will benefit from the government's promised $2-billion Low Carbon Economy Fund, which was established in 2016 to help provinces decarbonize their industries, homes and infrastructure.

The money is a significant part of the government's $5.7 billion, 12-year Pan-Canadian Framework on Clean Growth and Climate Change. The low-carbon fund is being given to provinces and territories that have signed on to the framework.

The 2018 budget shows that the biggest chunk of money, $420 million, is going to Canada's most populous province, Ontario, for retrofitting houses and reducing emissions from farms.

Quebec will get over $260 million for farmers and foresters to "adopt best practices," as well as energy retrofitting for buiLdings and "innovations" for industries to decarbonize.

British Columbia is also getting $162 million, some of which will go to "the reforestation of public forests," and Alberta will get about $150 million for farmers and ranchers to use less energy, as well as to establish renewable energy in Indigenous communities.

Alberta's funding will also restore forests affected by wildfires — such as the Fort McMurray fire that destroyed $3.7 billion worth of property, and evacuated at least 88,000 people.

Finally, $51 million is going to New Brunswick and $56 million to Nova Scotia for energy retrofitting.

-- Editor's note: This story was updated at 6:15 p.m. EST to include comments from Megan Leslie.

Feel good and appeal to

Feel good and appeal to previously unharvested target voter groups (females and indigenous peoples)... Why little is happening on Climate : read Nobel prize winning research findings in the book "Thinking Fast and Slow" which explains how our brains work biased by emotion, early strategies, overlearned quick known-pattern attribution (i.e. past experience) and unexpectedly, laziness - difficulty holding complex issues in working memory, thus automatically deferring to easy answers. Thus the critical role of journalism and the need for extensive exposure to really start to believe/hold "front of mind" and act on information i.e. make politically viable .
I am finding myself on a personal campaign (#journalismsrole) advocating for government to update Journalistic standards to include an independent transparent review of which stories get covered and how much coverage they require based on the evidence; this, as well as existing standards about how all sides must be covered impartially, to ensure sufficient exposure for an informed citizenry to make evidence based action by government politically viable. This is the only route back to some kind of faith in institutions that I can imagine. Otherwise all we can expect is more suspicion and polarization.