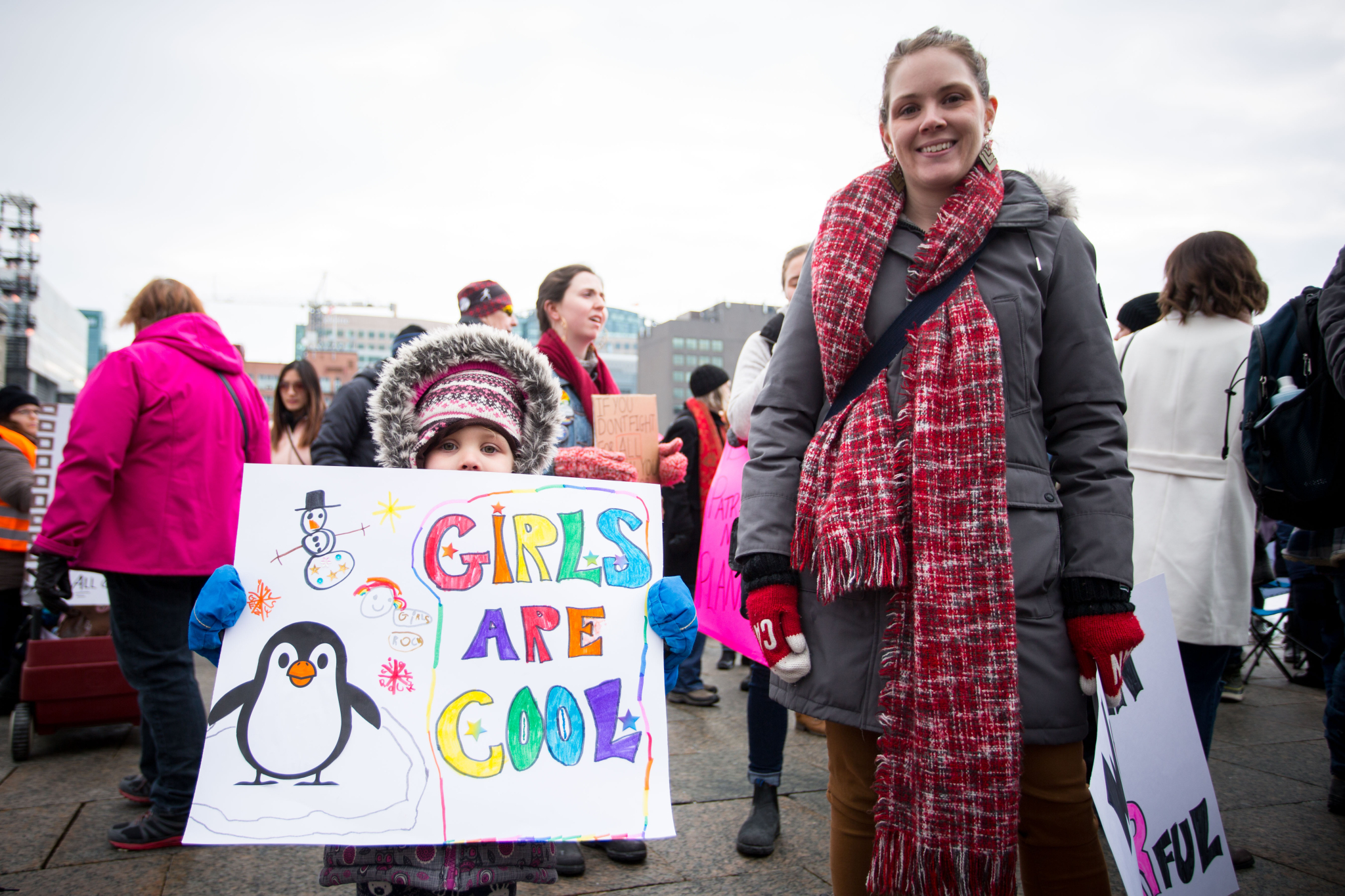 Kids were everywhere at the 2018 Women's March in Ottawa on Jan. 20, a year after Donald Trump's inauguration. Little Penelope Dej was among those making a statement. File photo by Alex Tétreault
Previous story
Next story

The federal government has proposed $100 million in new spending for community women’s organizations that work toward gender equality, in a brand new budget introduced on Tuesday in the House of Commons.

If approved, that investment would be rolled out over 10 years in a financial plan that Finance Minister Bill Morneau credits as taking an “historic and meaningful step” toward closing the gender gap in Canada.

“We know that we can’t make this necessary change happen for all Canadian women overnight,” he told members of Parliament in a prepared speech in the House of Commons on Tuesday. “What we can do, is lead by example.”

Budget 2018 makes unprecedented moves forward with proactive pay equity legislation for all federally-governed sectors, and was drafted using “Gender-based Analysis Plus” (GBA+) — an analytical tool that assesses how different groups of women, men and gender-diverse people may experience policies, programs and initiatives.

The budget also dedicated nine pages of its 11-page introduction to the importance of supporting women and girls.

The federal government is expected to introduce pay equity legislation in the fall that would apply to federal employers with 10 or more staff members, set out timelines for implementation, have independent oversight, and include seasonal, temporary, part-time and full-time work.

Bringing more women into the workforce

As it stands, average income for women in Canada is $28,120, compared to $40,890 for men — a difference of 31 per cent. While women account for nearly half of the Canadian workforce, they only represent only a third of senior managers and one in 20 CEOs.

The package tabled Tuesday includes $20 million in new spending to help women enter and succeed in the trades over a five-year period, $32 million over five years to create career pathways for visible minorities and newcomer women to Canada, and $10 million over three years for a Women in Construction Fund.

If approved, the budget would also add $105 million over five years to the coffers of regional development agencies that support investments in women-led businesses, and $1.4 billion over three years in new financing for women entrepreneurs through the Business Development Bank of Canada.

There's funding in #Budget2018 for nationwide roundtables on the importance of gender equity with discussions targeting men, boys and youth.

While Liz Majic, legal education and outreach coordinator for Canada without Poverty, lauded such investments in women’s employment, she said she’s concerned about their effectiveness given that the federal budget made no mention of a national framework on childcare.

Without the federal government’s leadership on implementing affordable, accessible childcare across the country in collaboration with provinces, territories and Indigenous governments, she said women are still vulnerable to poverty.

“When it comes to child care, they’re going to have to make difficult decisions and the gender wage gap — which this government claims to care about — is going to persist and inequality is going to persist,” she told National Observer on Tuesday afternoon.

In his speech in the House of Commons, while recognizing the need to make women and girls feel safe and secure at home, in schools and at work, the finance minister made a nod to sexual misconduct scandals that have rocked Canadian politics over the last few weeks.

“Movements like #MeToo and #TimesUp have shed light on disturbing situations and behaviours that too often, go unreported,” he told MPs.

“To better support those who have been victims of sexual harassment in the workplace, we will boost legal aid funding across the country, so that victims can better understand their rights and get the help they need.”

It includes $1.8 million in spending over two years for the Status of Women Department to engage men and boys on the topic, and $6.7 million over five years — with $600,000 annually in perpetuity — for the creation of a new Centre for Gender, Diversity and Inclusion Statistics.

Internationally, the federal budget has dedicated $2 billion in additional support to the Feminist International Assistance Policy over five years and $20 million for protecting vulnerable women and girls.