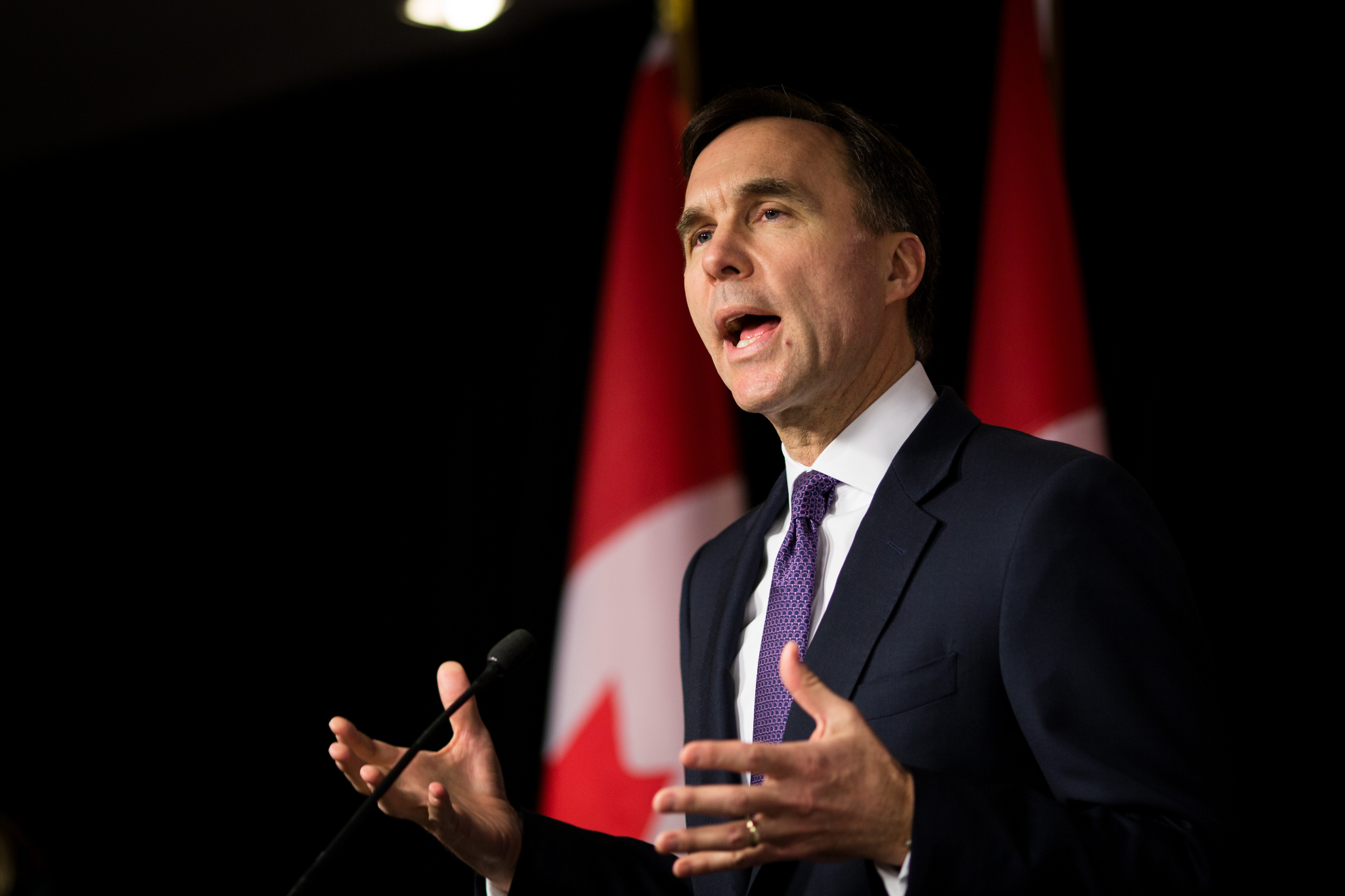 Finance Minister Bill Morneau explains what's in his budget during a news conference in Ottawa on Feb. 27, 2018. Photo by Alex Tétreault
Previous story
Next story

The federal government has proposed $5 billion over five years in new spending on services for Indigenous peoples in a budget that it believes gives historic recognition to the unique needs of First Nations, Métis and Inuit groups across Canada.

The new investments — poured into a variety of healthcare, housing, self-governance, employment, family and child services programs — would bring Ottawa’s total investments for Indigenous programs and services to more than $16.8 billion over seven years.

This represents an increase in spending from last year’s budget, which proposed $3.4 billion in new spending over five years.

Prime Minister Justin Trudeau has told his cabinet that no relationship is more important to his government than the one it has with Indigenous peoples. But it has also been criticized for not going far enough to recognize their rights and address problems such as lack of clean drinking water on reserves.

The government says its new proposal, tabled Tuesday in Parliament, focuses on meeting the distinct requests of First Nations, Métis and Inuit peoples, based on consultations with their leaders over the last two years.

“This budget invests in new tools to help nations rebuild, and to accelerate self-determination and self-government based on recognition of Indigenous rights, so that our shared future is one where Indigenous Peoples are in control of their own destiny, making their own decisions about their future,” said Finance Minister Bill Morneau in a prepared speech in the House of Commons.

“As the prime minister has said many times, when it comes to renewing the relationship between Canada and Indigenous Peoples, we have a responsibility to do better, and to do more.”

Examples of new spending proposals including $2 billion over five years to create a new Indigenous Skills and Employment Training Program that has distinct streams for First Nations, Métis and Inuit participants, includes child care for parents, and focuses on high-paying, high-quality jobs rather than “rapid re-employment.”

This is the first federal budget tabled that includes spending for the new ministries of Indigenous Services, and Crown-Indigenous Relations and Northern Affairs, and the third tabled under a promise from Prime Minister Justin Trudeau to renew nation-to-nation relationships with Indigenous peoples, and implement all of the Truth and Reconciliation Commission’s 94 Calls to Action.

Five-year spending highlights include an extra $1.5B for healthcare and $2B for a new employment skills program. #Budget2018 #cdnpoli

Toward self-determination and governance

Budget 2018, Morneau told Parliamentarians on Tuesday, is a budget that aims to close the quality of life gap between Indigenous and non-Indigenous Canadians, and moves all Indigenous governments towards self-determination.

It includes more than $72 million in new spending over three years to improve clean drinking water access on reserves. As it stands, 52 long-term boil water advisories have been lifted across the country. There are currently about 80 active long-term drinking water advisories affecting First Nations across the country, but the government says it’s on track to eliminate all of them by March 2021.

If approved, the budget would also eliminate the use of loans to fund Indigenous participation in the negotiation of modern treaties. Beginning in 2018-2019, this participation would be funded only through non-repayable contributions.

The budget includes more than $150 million over five years to help Indigenous nations reconstitute and participate in recognition of rights and self-determination discussions. It also adds $188 million in spending over five years to build internal fiscal administrative capacities of Indigenous nations, deliver on their governance action plans, and establish regional data governance centres.

Trudeau’s government has faced harsh criticisms over the past two years for under-spending on Indigenous children, pushing major resource development projects past the objections of Indigenous leaders, and waffling on its interpretation of “free, prior and informed consent,” as defined in the United Nations Declaration on the Rights of Indigenous People.

Noticeably absent from this year’s budget package, is new funding for Indigenous students from Kindergarten to Grade 12.

While Trudeau’s ministers have made some headway on the issue of drinking water advisories bilateral discussions with the national Aboriginal associations, and the development of an unprecedented framework on the recognition of Indigenous rights, the statistics on Indigenous livelihoods remain troubling. According to federal numbers, Indigenous children under the age of 14 make up 7.7 per cent of all children in Canada, but still represent more than half of all children in foster care. Nearly one in five Indigenous people lives in housing that needs major repair, while one in five are in overcrowded housing. As it stands, the rate of tuberculosis among Inuit peoples is more than 270 times higher than non-Inuit, Canada-born citizens.

These statistics, the budget document notes, disproportionately impact the livelihood of Indigenous women and girls.

To help eliminate that disparity, Morneau’s new budget proposes $1.8 billion in new funding over six years for First Nations child and family services, with a special focus on prevention: preventing circumstances in which children are taken away from their families, circumstances that lead to substance abuse; that lead to precarious housing or income and more.

It includes $47.5 million over five years — and $9.5 million per year in perpetuity after that — to support children’s participation in sports for social development. It has also increased support for the survivors of the Indian Residential School System and their families through $248.6 million in new funding for counselling, mental health and other services over three years.

The government has also highlighted $1.5 billion in new spending on healthcare over five years:

The budget, if approved, includes new pots of cash for transitioning Indigenous peoples off of income assistance, bringing 50 new First Nations into their own land management regimes, and continued assistance to help divvy up property on reserves when couples have split or suffered family violence.

Starting in 2018-2019, it will invest $5 million in the Gord Downie and Chanie Wenjack Fund, which aims to promote cross-cultural dialogue and create spaces dedicated to reconciliation.