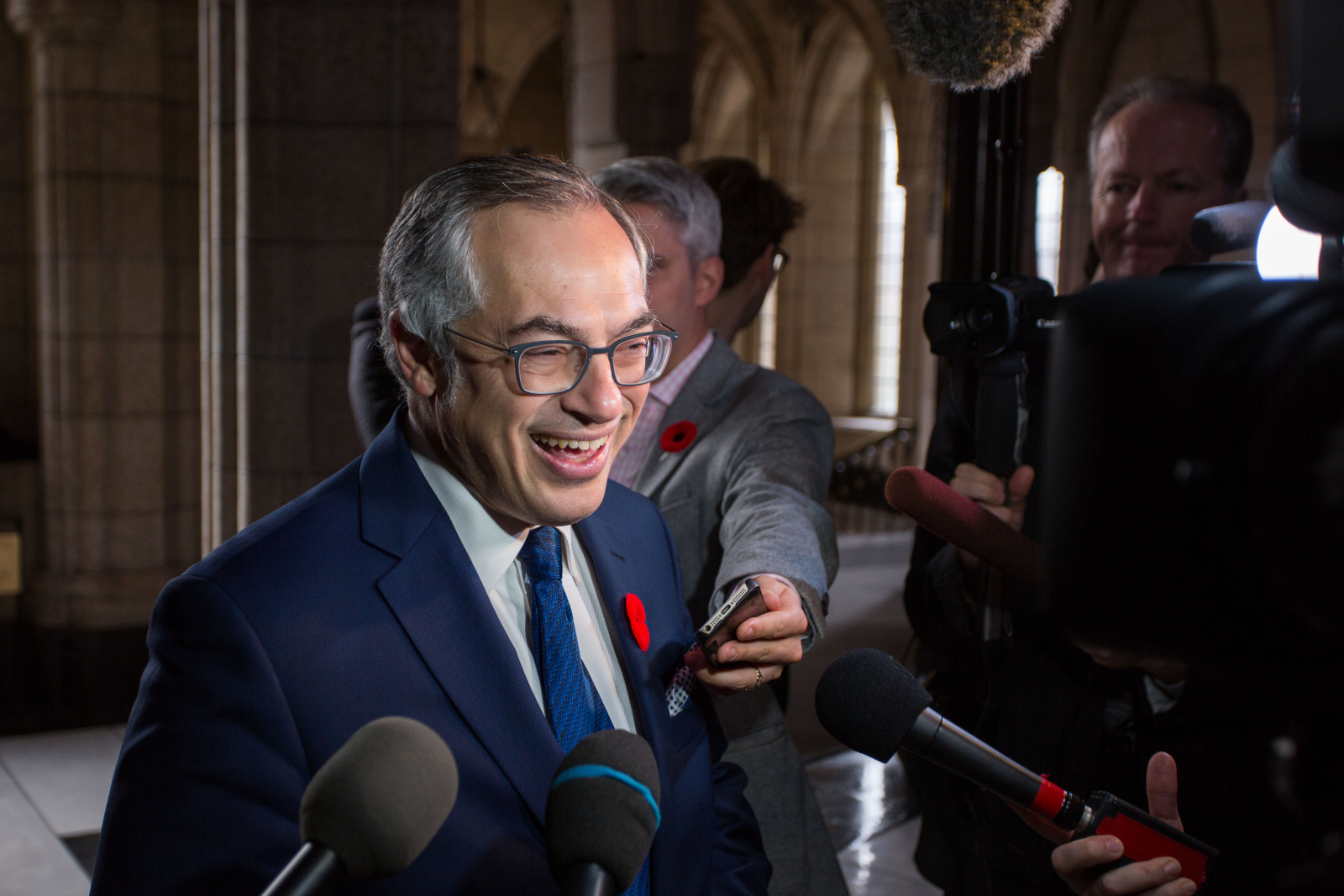 Conservative MP and former Treasury Board president Tony Clement is defending the Harper government’s handling of a dysfunctional system that was unable to pay thousands of public servants on time.

While in former prime minister Stephen Harper's cabinet, Clement had a responsibility to oversee how the federal government was spending money as it pursued a plan to build the Phoenix pay system. The plan was supposed to save about $70 million a year by axing hundreds of payroll jobs and creating a centralized pay centre in the small New Brunswick town of Miramichi.

Instead, Phoenix — described in Finance Minister Bill Morneau's budget on Tuesday as a "flawed" and "unacceptable" system — sparked countless horror stories about public servants not getting paid, and in some cases losing their cars and homes.

On Wednesday, Clement took to Twitter to disavow any responsibility for the money-wasting fiasco.

It was your Liberals that pressed the Start button and have caused immeasurable pain by ignoring the problems. Suggest you read the Auditor General’s Report which makes the same points I am making. Thx.

“It was your Liberals that pressed the start button and have caused immeasurable pain by ignoring the problems,” the MP for Parry Sound — Muskoka wrote on Twitter to the 2015 federal Liberal candidate in his riding, lawyer Trisha Cowie.

“Suggest you read the auditor general’s report which makes the same points I am making.”

“It was your Liberals that pressed the start button and have caused immeasurable pain by ignoring the problems,” wrote @TonyClementCPC on Twitter, defending his role in handling the federal government's dysfunctional Phoenix pay system.

In the dying days of Conservative rule in June 2015, disgruntled workers warned that the “tsunami” of files being transferred to Miramichi was going to present problems, the Ottawa Citizen reported. They were told that the pace wouldn’t be slowed and more staff wouldn’t be hired.

Auditor General Michael Ferguson’s report this November made clear that the problem continued growing after the Trudeau government came to power later that year. He found it took Public Services and Procurement Canada “four months to recognize that there were serious pay problems” and “about a year after that to have a better understanding of the problems.”

The report also outlines Treasury Board responsibilities as the employer of the public service and in regulating pay and work hours, among other duties. Clement was shuffled into the Treasury Board spot after Harper formed a majority government in 2011. Three other Tory ministers held the position before Clement took over.

Taxpayers have now spent over $460 million on the Phoenix pay system, and tens of thousands of federal employees have been underpaid, overpaid or not paid at all. The government says it will need to spend $450 million more over the next six years to address further problems.

“Phoenix was supposed to save $78 million, but has now cost over $400 million. Glad to see it go. Demand apology from [Tony Clement] for choosing a known problematic system!” wrote Cowie.

That’s why we didn’t go live. Unfortunately your Liberals didn’t heed the warnings and pressed start. Btw you’re in the third year of your mandate: when do YOU take responsibility??

Clement shot back that his government “didn’t go live” with the program. Phoenix was first launched in February 2016, about three months after the Liberals were sworn in.

“Unfortunately your Liberals didn’t heed the warnings and pressed start. [By the way] you’re in the third year of your mandate: when do you take responsibility?”

On Monday, Public Services Minister Carla Qualtrough did issue an apology in the House of Commons, on behalf of the government, for the troubles caused by Phoenix.

At the same time, however, she defended the decision to launch the pay system, blaming her Conservative predecessors for leaving the Liberals no choice but to bring Phoenix online because the government's previous system had been "decommissioned" and its compensation advisers fired.

The auditor general’s report states that about 1,200 pay advisor positions across 46 departments and agencies had already been eliminated by “early 2016.”

The Trudeau government’s intention to move away from Phoenix was applauded by labour groups Tuesday as an important step toward ending the pay nightmares that thousands of federal employees have lived through.

The commitment to begin development of a new pay system came just one day before angry civil servants were set to protest the second anniversary of the launch of the problem-plagued system.

Starting in April, the government will begin efforts "on a way forward on a new pay system" in consultation with technology providers, pay system experts and public service unions, said the budget.

"At least the government is biting the bullet and saying, 'We've got to move on to build a new system,'" Yussuff said. "I think that's going to take some time, but we're very pleased."

The Professional Institute of the Public Service of Canada (PIPSC), one of the country's biggest civil service unions, said in November that its members — many of them IT professionals — could build a new, properly functioning pay system within a year.

The union sat down with Treasury Board President Scott Brison in the days leading up to the budget, and said more meetings were planned in the coming weeks to talk about how to transition away from Phoenix to another system.

"It's the first time there's been a genuine commitment to building an alternative," said PIPSC president Debi Daviau.

She said the union is open to working with the private sector "in limited ways" to ensure a new pay system can be created, and properly tested, as quickly as possible.

There have been countless stories of government employees struggling to pay their bills under Phoenix. Some lost cars and even homes before the government, and unions representing the workers, were made aware of the extent of the problems, officials said.

Other civil servants who were overpaid were warned last month that under Canadian tax law, they could face having to pay back more than they received in overpayments.

The government said Tuesday it will consider changing those laws so civil servants are not forced to pay taxes they may owe on mistaken payments until their pay problems are resolved.

Tuesday's budget also pledged $5.5 million over two years to the Canada Revenue Agency to process income tax reassessments for civil servants whose finances have been impacted by Phoenix.

It also opened the door to a potential settlement of lawsuits that have been launched as a result of the pay debacle.

"To address the real mental and emotional stress and unacceptable financial impacts on public servants, the government has initiated discussions with public service representatives to address the numerous grievances and legal actions," the budget said.

Looking at and hearing

Looking at and hearing Clement's words reminds me of Hannah Arendt's term "The Banality of Evil" furthermore she goes on to say
"What he said was always the same, expressed in the same words. The longer one listened to him, the more obvious it became that his inability to speak was closely connected with an inability to think, namely, to think from the standpoint of somebody else. No communication was possible with him, not because he lied but because he was surrounded by the most reliable of all safeguards against the words and the presence of others, and hence against reality as such."
Lets not forget Clement spending $50-million of public money in the Muskoka region of Ontario for the 2010 G8 summit, and calling it "investments in infrastructure to reduce border congestion." But in reality "pork barrel" politics.
Don't be too quick to call the tea pot black, Tony. You and your Conservatives pressed the start button. Its a fact which is true whether you believe it or not.

When are the lovely people

When are the lovely people going to pay back the rest of us for the $50 - million Tony splashed out on their gazebos, forest toilets, and curbs? Shame doesn't have to last forever. But, you did vote him back in in 2015.

You're the guy who killed the long-form census, as I recall, despite universal cross-sector calls for its continuance, and lied about whether it was in accord with Munir's advice. We now have a break in our national data set, which affects trending.

You're the gazebo-gate guy, right? Money that was supposed to go to border defence went to luxuries, not necessities, in your riding.

And your sleaze goes back to your tour as Health Minister in Ontario: you're the snake who turned Witmer's promised increase to base funding for addictions agencies in the promise into one-time. And then you and your office sat on the approval letters until AFTER the mandatory date for agencies to submit their operating plans for that year, so they all had to be re-done, causing much more work with the concomitant expense to these desperately over-worked and under-funded organizations.

Abuse of authority much?

Yeah Tony, you're SO credible. On anything. Not.

Clement is a despicable

Clement is a despicable example of a Conservative politician. While in power with Harris in Ontario, he was the guy behind the deregulation that resulted in the DEATHS of people in Walkerton. He skated on that one, unbelievably. Known as an ignorant Minister, who would not listen to anyone that disagreed with him, he has also given us Phoenix. And, he's trying to skate on this one too. He knows damned well that all the decisions were made well ahead of the implementation date. And he knows that the problems with Phoenix that were known were swept under the rug. That this guy keeps getting re elected is an amazing indictment of voters in his Ontario riding.