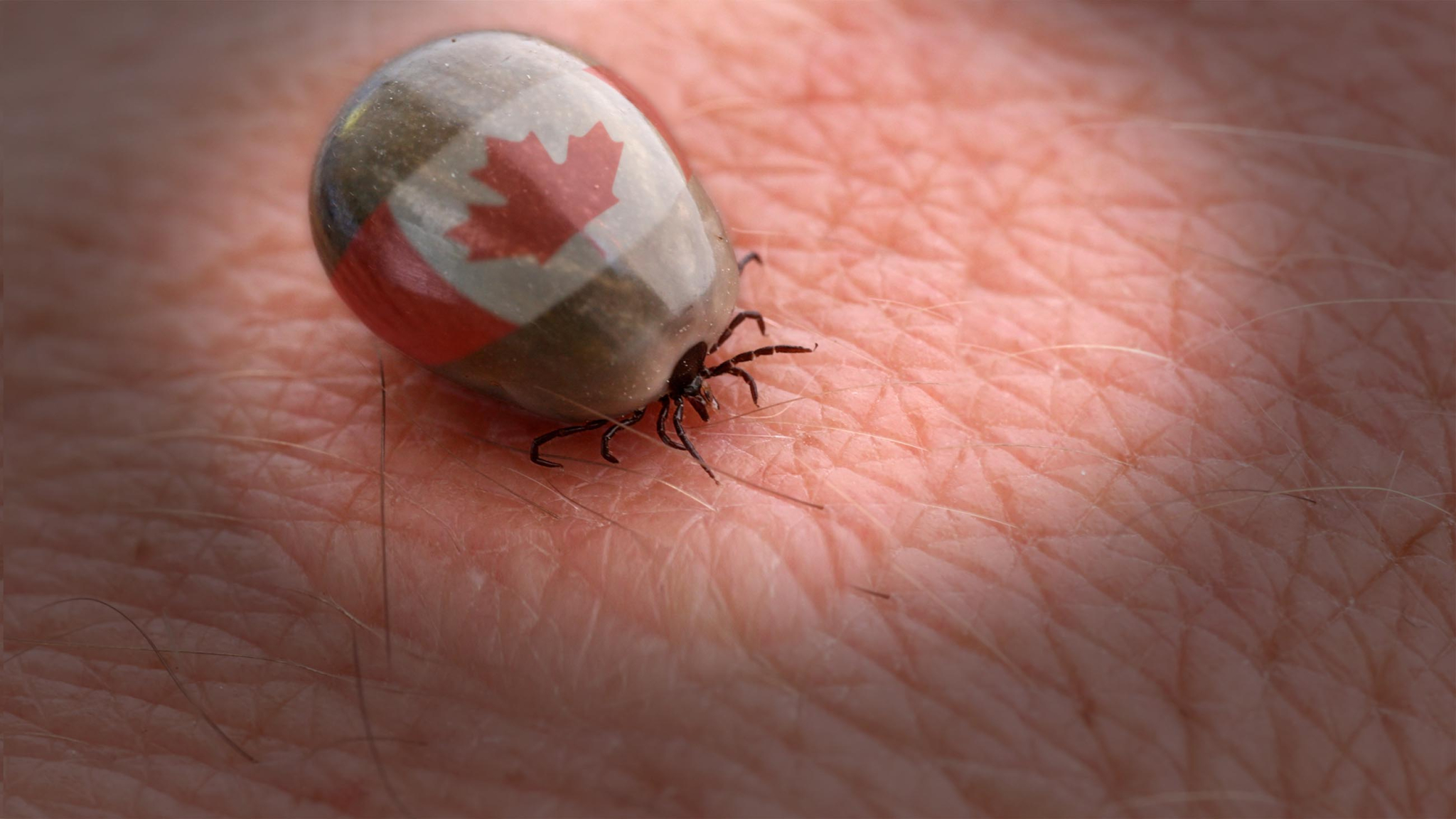 This article was originally published by Undark on March 7, 2018. It was republished as part of climatedesk, a journalistic collaboration dedicated to exploring the impact — human, environmental, economic and political — of a changing climate.

Joanne Seiff, a resident of Manitoba, contracted Lyme disease a couple of years ago but didn’t remember pulling off the tick that bit her; nor did she have the telltale bullseye rash of a tick bite. Her husband Jeff Marcus, who grew up in New York’s Hudson Valley, about an hour and a half from the eponymous town of Lyme, Connecticut, recognized her symptoms immediately because Lyme disease was common there.

Canadian doctors, however, were not convinced.

“Even though we had been telling people for months that she had Lyme disease and that all she needed was about four weeks of antibiotics, we were seeing specialist after specialist, and getting the same run-around,” Marcus says. “She was getting sicker and sicker.” At their wits’ end, they paid thousands of dollars for testing at a certified lab in the United States, which finally convinced a Canadian doctor to treat her.

Ticks carried by migratory birds have been raining down on Canada for years. But it’s only in the last 10 to 15 years, amid a changing climate and the creation of new habitats in the north, that populations of deer ticks (Ixodes scapularis) have been able to establish a permanent beachhead in Canada. They have brought with them a variety of tick-borne diseases, the most common of which is Lyme.

According to Canada’s Lyme surveillance efforts, the number of reported Lyme cases increased more than six-fold from 2009 (144 reported cases) to 2016 (987 reported cases). And while public awareness of the disease is increasing in Canada as caseloads surge, many patients still struggle to get diagnosed and treated — enough so that many of them have been driven to seek help beyond the country’s borders, or even from alternative medicine practitioners with questionable expertise but in some cases, a more sympathetic ear.

“There are people who are really suffering,” says Tara Moriarty, an associate professor in the Faculty of Dentistry at the University of Toronto who studies the dissemination of blood-borne pathogens. That suffering, she says, “has made a lot of people feel very marginalized.”

Of course, diagnosing Lyme is far from foolproof, no matter where the bacterium that causes it, Borrelia burgdorferi, has surfaced. As many Americans already know — particularly those in the tick-infested Northeast — diagnosis of Lyme disease is most straightforward when patients present with a signature bullseye rash at the site of the bite. If the tick and/or rash are missing, which can happen in as many as half of all cases, diagnostic testing for Lyme disease in Canadian government labs follows the guidelines from the Infectious Diseases Society of America, which recommends a two-tiered test developed by the U.S. Centers for Disease Control and Prevention. This involves an initial test to determine if the body has mounted an immune response and is producing antibodies to Borrelia burgdorferi. If the test is positive, the second test seeks to confirm the infection by identifying proteins specific to Borrelia burgdorferi.

The tests, however, are imperfect. It can take several weeks for the body to produce antibodies to Lyme, for example, and if the test is administered too early, it will produce a false negative. Similarly, there are a variety of geographically distinct strains of Borrelia, which can sometimes produce equivocal western blot results.

“Even though we had been telling people for months that she had Lyme disease, … we were seeing specialist after specialist, and getting the same run-around.”

Complicating matters further, ticks often carry more than one pathogen, such as the bacterium anaplasma or the malaria-like parasite babesia, which are not detected with the standard tests for Lyme. These pathogens can produce co-infections with Lyme. Kateryn Rochon, an assistant professor at the University of Manitoba who has been sampling the expanding range of ticks throughout the province for the last three years, and her collaborator, Jeff Marcus, husband of Joanne Seiff and an associate professor of biology at the university, estimate that 65 percent of the deer ticks in Manitoba are carrying either Lyme disease and/or one of the other two commensal human pathogens.

This all makes for a muddy diagnostic regimen even in regions with a long history of Lyme, but with Canada’s exposure still comparatively new, many doctors may not even suspect Lyme in an ailing patient. And even when they do, there are often systemic and cultural barriers to testing, according to Jim Wilson, the founder of the Canadian Lyme Disease Foundation, who contracted Lyme disease many years ago and was very sick for several years before he found effective treatment. After his daughter contracted Lyme in 2001, he decided to found the organization to raise awareness of the issue.

Many medical doctors feel caught in a Catch-22, Wilson suggested — simultaneously discouraged from making a diagnosis on clinical symptoms alone, and limited to laboratory tests that are often inconclusive. Doctors that diagnose and treat Lyme disease effectively — through a mixture of educated clinical diagnosis and testing — “have been policed out of business,” Wilson says, leaving them hesitant to diagnose and treat the disease at all. This leaves many patients with little recourse but to turn elsewhere — including seeking diagnosis via for-profit labs the U.S.

Moriarty at the University of Toronto thinks that’s a mistake, arguing that the lack of regulation at such labs leaves the door open for errors and even exploitation. The commercial labs in the U.S. aren’t as tightly regulated as the government labs in Canada, she argues, and many for-profit labs “diagnose Lyme disease in people who are not infected as often as they diagnose it in people who are.” A review of studies published in the Canadian Medical Association Journal in 2015 supported this assertion, showing that some analyses of U.S. specialty labs had false-positive rates ranging from 2.5 percent to as high as 25 percent. One lab showed false-positives in 57 percent of samples taken from a control group known to be Lyme-free.

Many Canadian patients are also turning to naturopathic physicians for help. Such practitioners are not restricted to government-approved laboratory tests, and they have more freedom to clinically diagnose and treat Lyme. The problem is — with the exception of British Columbia, naturopathic physicians are not able to prescribe the only scientifically proven treatment for addressing Lyme: a long course of antibiotics.

Not surprisingly, given his prescription-writing ability, naturopathic physician Eric Chan at the Pangaea Clinic of Naturopathic Medicine in British Columbia sees patients from all over Canada, and he has developed a practice focus in treating patients with chronic Lyme. “Not all infections are really simple,” Chan says, adding that patients with chronic Lyme may need antibiotic treatment to get rid of the infection, as well as treatment for the physiological symptoms of chronic stress, poor sleep, and pain. “When we take this multi-faceted approach, then patients start to feel better,” he says.

In conjunction with — or sometimes in lieu of — antibiotics, Chan uses a variety of approaches to treat Lyme, including ozone therapy by “major autohemotherapy”, that is, by withdrawing the patient’s blood, adding ozone to it, and then reinjecting it into the patient. According to Chan’s website, ozone therapy stimulates the immune system to clear the infection. Other naturopathic treatments offered for Lyme “involve sauna therapy with oxygen, IV vitamin C, IV glutathione for flares, DMSA and EDTA chelation, and oral chlorella, cilantro, garlic,” according to the site.

But Moriarty and other experts are quick to note that, aside from treatments with antibiotics, much of this is bunkum. “There is absolutely no evidence that any naturopathic treatment does anything to help Lyme disease. It is absolutely costly. There is zero evidence,” Moriarty says. “And anyone who promises or markets a treatment that is naturopathic for this disease is in my belief acting unethically.

All of this leaves many Canadian patients and their doctors on uncertain footing when it comes to diagnosing and treating a growing problem. Last year, the Canadian government pledged an additional $3 million ($4 million Canadian) to fund more Lyme research, and in response to that, Moriarty is co-leading a grant proposal application for a network of approximately 50 scientists and physicians across Canada to be submitted to the Canadian Institutes of Health Research and the Public Health Agency of Canada in March 2018. The multi-pronged proposal includes work to improve diagnostics, to conduct surveillance, to educate general practitioners about Lyme, and to build a biobank of patient samples.

“Until we can actually test different ideas and figure out if they are right or wrong, all guidelines have to be based on evidence.”

“Until we can actually test different ideas and figure out if they are right or wrong, all guidelines have to be based on evidence and what we know because otherwise they wouldn’t be guidelines,” Moriarty says.

“It’s our job to be professionally skeptical,” she adds.

Of course, some patients and advocates argue that the current guidelines are not based on the best evidence and that they are beholden to powerful interests. Disability insurance companies in Canada often claim that chronic Lyme disease does not exist, for example, so that they don’t have to pay disability claims. Such companies sometimes hire infectious disease doctors as experts to testify in court to deny claims, Wilson explains.

At the same time, many insurance companies deny life insurance to potential clients who have had a Lyme disease diagnosis, says Janet Sperling, a Lyme disease researcher at University of Alberta. Sperling — who was a stay-at-home mother when her son contracted Lyme disease and doctors couldn’t diagnose or treat him — suggests that such inconsistencies show that Lyme disease is “becoming politicized.” The experience with her son prompted her to pursue a Ph.D. at the University of Alberta so she could help start untangling Canada’s growing Lyme challenge. She’s currently investigating tick-borne pathogens that often co-occur with Lyme. “If it’s not Lyme disease, then what is it?” she asks.

Although the pace of progress has been glacial in the face of this rapidly spreading infectious disease, there is potential hope on the not-too-distant horizon: The French pharmaceutical company Valneva is currently working to develop a Lyme vaccine. Such a vaccine previously existed in the U.S., where it became FDA approved in 1998. But after complaints about side effects that led to lawsuits and falling vaccine sales, it was withdrawn in 2002. But a new and better vaccine could play a major role in controlling Lyme.

“If it works and it is safe, the Canadian government should be putting a lot of money into getting this out there,” Moriarty says, “because I think that’s going to be single-handedly more effective than anything else.”

In the meantime, there are no immediate solutions. But Marcus, witnessing the Canadian medical and public health system struggling to keep up with this emerging infectious disease, feels a sense of déjà vu.

“I grew up about an hour and a half from Lyme, Connecticut, in the 1980s when the Lyme epidemic was being recognized, and I remember the people who were sick for years and years without treatment because they weren’t showing symptoms that people first recognized as being associated with Lyme,” he says. “And it’s happening again in Canada, as the bacteria and the ticks are establishing themselves here.”