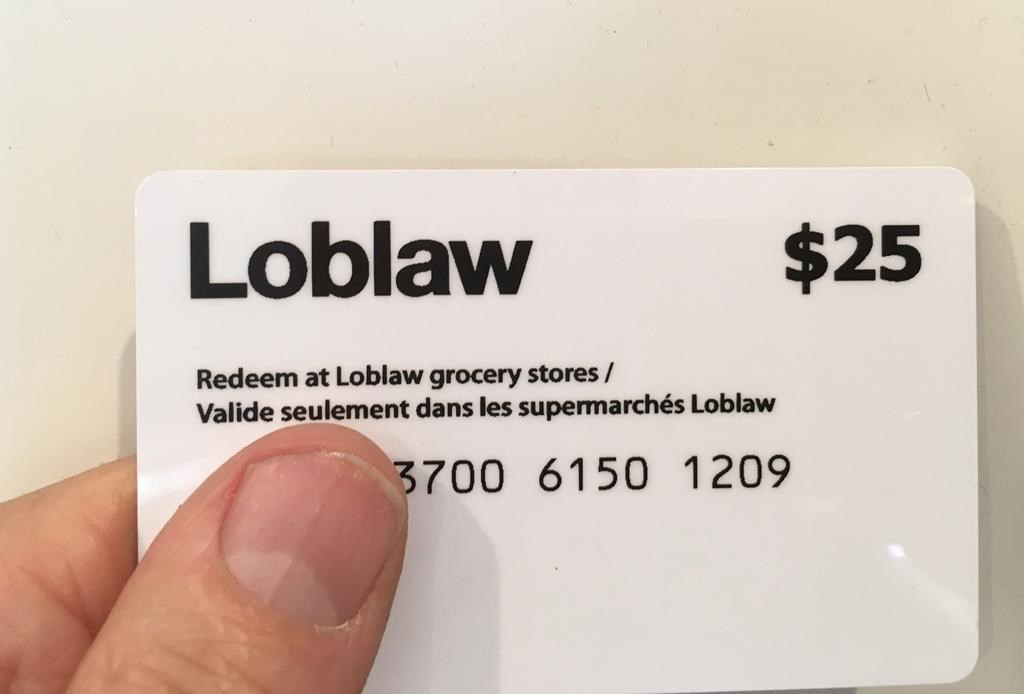 A $25 Loblaw gift card is shown in Oakville, Ont., on Thursday, March 8, 2018. File photo by The Canadian Press/Richard Buchan
Previous story
Next story

The Privacy Commissioner of Canada said Wednesday it has opened a full investigation into how Loblaw Companies Ltd. has required customers to produce personal identification to secure a $25 gift card related to the alleged bread price-fixing scandal.

The investigation comes after a formal complaint to the office, as well as numerous inquiries to its information centre and through its Twitter feed, said spokeswoman Tobi Cohen.

"We have reached out to Lobaws following media reports about authentication practices related to the issuing of bread price-fixing gift cards," she said by email.

The investigation comes as Loblaw Companies Ltd. provided some insight Wednesday into why select customers are required to produce a driver's licence or utility bill to secure the card.

There are various triggers that might lead the company to ask for further confirmation, including large numbers of registrations from a single address, multiple requests under a single or similar name, or irregularities like an invalid address or email in a registration, said Kevin Groh, Loblaw vice-president of corporate affairs.

"Our plan to distribute tens of millions of dollars is a natural target for fraudsters, and we want to make sure this money is actually landing in our customers' hands."

The vast majority of customers won't be required to make the additional step, said Groh.

Privacy Commission guidelines say individuals should be made aware of the reason the information is being collected and that it should only be used for the purposes for which it was collected.

"If there is no legal requirement to do so, or the organization does not intend to maintain an ongoing relationship with an individual, it likely does not need to identify an individual," said the document linked to the tweet.

It added that a driver's licence or a social insurance number shouldn't be used as an identifier because they were created for different purposes.

Groh said the company is only collecting the information for verification purposes and will then destroy it.

"This program is designed to pay people back quickly and directly, without requiring proof of purchase or forcing customers to wait for a class-action lawsuit ... for a small percentage, we've asked for proof of name and address," he said in an email.

Loblaw has offered customers a $25 gift card as a goodwill gesture after admitting participation in what it says was an industry-wide arrangement to fix bread prices.

Loblaw recorded a charge of $107 million in relation to the gift card program and said it expects the program to cost the company between $75 million and $150 million, with an estimated three million to six million consumers signing up.

The decision to ask some for ID sparked customer outrage online. Some pointed to the perceived irony of the company's apparent fraud prevention measure, given that the gift cards are a gesture of apology for deceiving the public.

Grocery competitors have denied any wrongdoing and criticized Loblaw for misleading the public and making other retailers appear guilty.

The head of Sobey's parent company, Empire Co. Ltd., said Wednesday that it expects the cards will have some impact on its sales.

"We're expecting to see increased pressure on sales in fourth quarter as those curious gift cards from our competitor ... continue to hit the market," CEO Michael Medline said during a conference call about its third-quarter results.

— With files from Ross Marowits in Montreal.