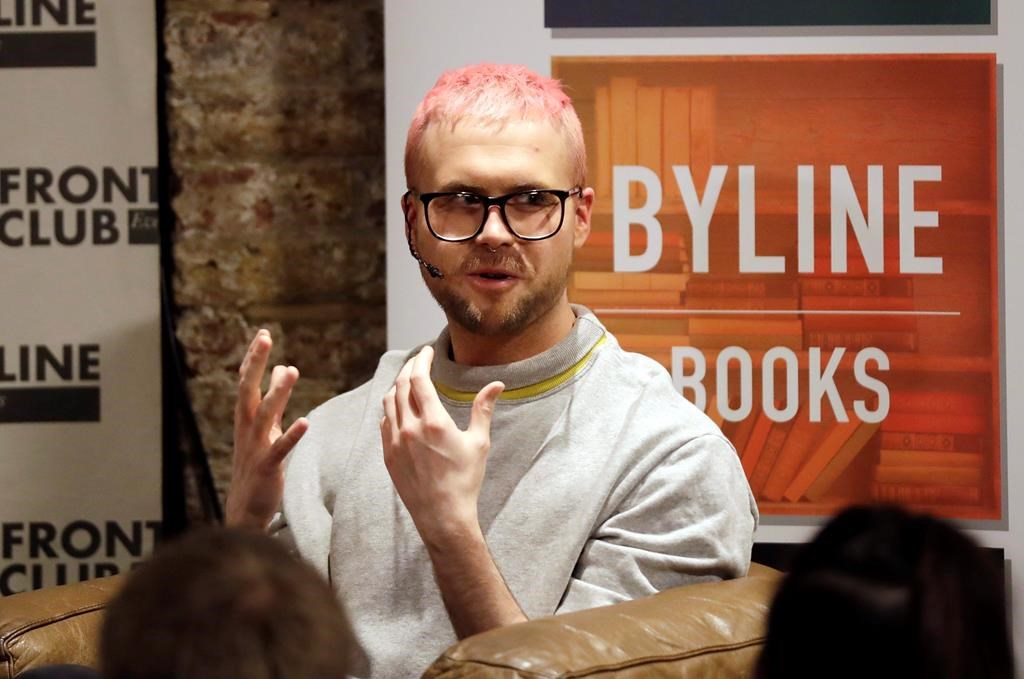 Canadian whistleblower Christopher Wylie, who previously worked with Cambridge Analytica, speaks at the Frontline Club in London on March 19, 2018. Photo by the Associated Press
Previous story
Next story

"In early 2016, Mr. Wylie's company Eunoia Technologies ran a pilot project for the Liberal Caucus Research Bureau," said Melissa Cotton, director of the party's research bureau in a statement sent to media outlets. "The total fees for services was $100,000 and was done in accordance with the House of Commons procurement rules."

Cotton's statement was issued in response to a report by The Canadian Press, which revealed that the party had issued the contract.

Wylie has been in the news this week after admitting to helping political parties score electoral wins by exploiting the private information of millions of Facebook users.

He alleged in an interview with the Guardian in London that a voter-profiling company improperly harvested Facebook data from some 50 million users in order to help seal victory for the Trump campaign. It was also associated previously with the U.K.'s Brexit referendum, but the existence of a European partnership was later denied by both the "Leave" campaign as well as the company.

Wylie has also insisted in interviews that he not only played a pivotal role in developing the data-mining technique, he also helped establish Cambridge Analytica, the firm at the heart of the controversy that was first revealed by The Guardian newspaper and the New York Times.

Cotton said that Wylie's firm didn't have "access to any data" from the party's research bureau. She also said that there were four tasks assigned to Wylie as part of the contract:

Another Liberal parliamentary source, who spoke to The Canadian Press on condition of anonymity in order to discuss details of a private meeting, said that Wylie had pitched his services to the Liberals in January 2016, months before U.S. President Donald Trump's win.

Even before the meeting, Wylie, who was from British Columbia, had experience working at the highest levels of the party.

From 2007 to 2009, he worked in the office of the Liberal leader, when the party was helmed by Stéphane Dion and Michael Ignatieff. He was also a member of the party’s youth commission.

Following the meeting, the Liberals signed a contract with Wylie in 2016 and he launched a pilot project, the source confirmed. The source would not provide further details on the nature of the contract or its duration, saying only that Wylie’s services were focused on “information management.”

After seeing what Wylie had to offer, the party chose not to proceed further with the project, said the source, who added that it’s not uncommon for political parties to try out the services of contractors for brief periods of time.

The contract was awarded in accordance with all the procurement rules, and at no time did Wylie have access to anyone's personal data, the source added.

However, Liberal party spokesman Braeden Caley said in an email that the party did not contract Wylie to do any work after staffers met with him in January 2016.

When asked about the party’s interactions with the data expert, a spokeswoman for Prime Minister Justin Trudeau confirmed that a meeting took place between Wylie and the Liberal caucus research bureau in January 2016.

“Mr. Wylie did some preliminary work for the Liberal caucus research bureau but ultimately it was decided not to move forward with his services,” Chantal Gagnon said in a brief email.

Earlier this week, The Canadian Press spoke with an acquaintance of Wylie's who described having drinks with the data expert in Ottawa in November 2015, a few weeks after the federal election.

The acquaintance said Wylie talked about his plans to shop his Facebook data-mining techniques in the national capital, including with the Liberals, and also in Washington with the Republican party.

Wylie described using a Facebook survey as an entry point to collect user data, and the pair discussed the ethical concerns surrounding the method, said the acquaintance.

By 2009, during Wylie’s stint working for the Liberal leader’s office, he had already begun to develop strategies on how politicians could capitalize on information collected through social media, another former Liberal insider said earlier this week.

At that time, Wylie was pushing a fledgling form of the data-harvesting technique, but the idea was considered too invasive and raised concerns with the Liberals, who decided they didn't want anything to do with it and chose not to renew his contract, said the insider, who also discussed the matter only on condition of anonymity.

Wylie has not responded to interview requests by The Canadian Press.

The federal privacy commissioner has formally launched an investigation to determine whether any personal information of Canadians was affected by the alleged unauthorized access to Facebook user profiles.

Meanwhile, the Trudeau government is asking the Communications Security Establishment and the Canadian Security Intelligence Service to take a closer look at the situation to better ensure the privacy rights of Canadians are protected.

Scott Brison, the acting minister for democratic institutions, said Tuesday he'd be open to strengthening federal privacy laws even further to better protect those who share their information online.

Newspaper reports have said Facebook first learned of the data leak more than two years ago, but didn't disclose it until now.

Cambridge Analytica has “strongly denied” the allegations that it had improperly obtained Facebook data.

— with files from Andy Blatchford, The Canadian Press and from the Associated Press

Editor's note: This article was updated at 2:40 p.m. ET on March 21 with new statements made by the Liberal Research Bureau. It was updated again at 5:40 p.m. to clarify that Cambridge Analytica had hoped to work for the Leave campaign in the United Kingdom, but denies it wound up taking on a contract.

I just want to know if the

I just want to know if the gov't or the liberals have the results of this research.

The US based organization

The US based organization Demand Progress just labelled Cambridge Analytica as a right-leaning tech firm, tying it to Facebook and the Trump campaign. Interesting, because that firm apparently had ties to the federal Liberal Party.

So the government spent $100

No, it's not fishy and they

No, it's not fishy and they didn't pay for nothing.
People who do research and development for organisations, get paid for the work done, as they should per contracted obligations. The organisation may not use the results. If $100,000 seems pricey to you, I suggest you consider the extent and level of the work required. After factoring in all the hours, not to mention the resultant work, which includes data and options for going forward, one doesn't actually earn that much per hour. (Which is depressing at tax time.)