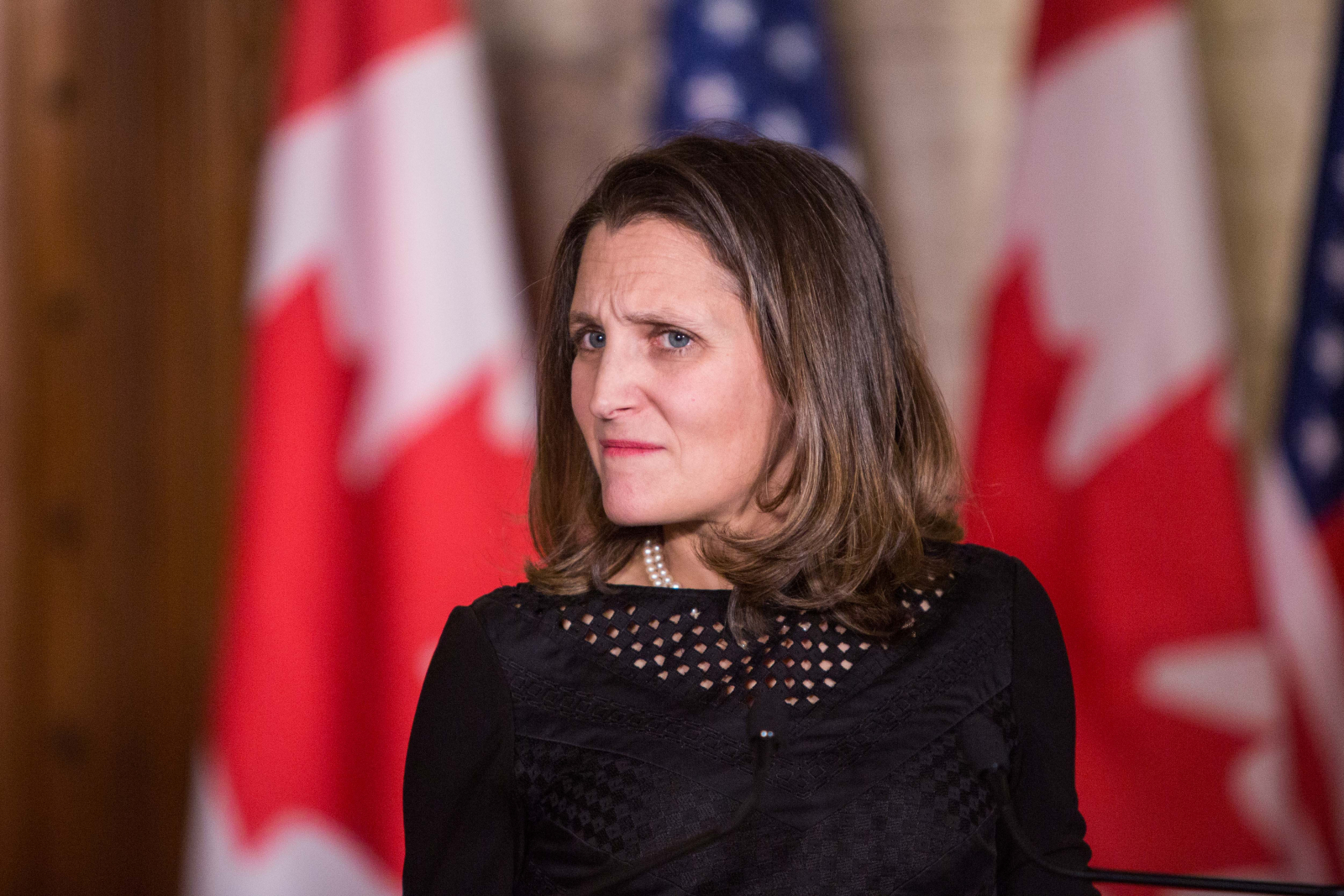 ​Foreign Affairs Minister Chrystia Freeland says Canada is expelling four Russians "identified as intelligence officers" or people trying to harm the country, and it will deny permission for three other diplomats who were slated to bolster Russian staff in Canada.

She says the move is in solidarity with Britain in the wake of a nerve agent attack in that country which left a former Russian spy and his daughter in hospital.

Freeland calls the attack a despicable and reckless act.

“We are taking these measures in solidarity with the United Kingdom," Freeland said in a statement. "These measures are not aimed at the Russian people, with whom Canadians have long and fruitful ties. Canada remains committed to dialogue and cooperation with Russia on issues where we face common challenges."

The diplomats to be expelled are from the embassy in Ottawa and the consulate general in Montreal, and Freeland accused them of threatening Canada's security and its democracy.

"The four have been identified as intelligence officers or individuals who have used their diplomatic status to undermine Canada’s security or interfere in our democracy," she said. "For similar reasons, three applications by the Russian government for additional diplomatic staff in Canada will now be denied. All of these steps have been taken pursuant to the Vienna Convention on Diplomatic Relations and to the Vienna Convention on Consular Relations."

The minister did not provide further details, including the nature of their activities or why the Russians had been permitted to stay in Canada if they posed a threat to the country.

Public Safety Minister Ralph Goodale — who described the recent Russian activity in England as "absolutely horrendous and despicable" — also declined to provide details about what the Russian agents did in Canada.

"The selection of the individuals is a selection that's done with, with great care by the Global Affairs Department in consultation with other relevant agencies across the Government of Canada," Goodale said. "It's done in a manner to make the point very clear to the Russian government that we are deeply concerned and we're also very alert to the activities that we consider to be unacceptable."

Russian Embassy Statement with regard to the Government of Canada decision to expel Russian #diplomats pic.twitter.com/N2EwKAeWvC

"By taking for granted the totally baseless British accusations, in stark violation of due process ahead of ongoing investigation, if any of the 'Skripal case,' Canada obediently follows the US/UK designed dangerous confrontational policy," the embassy said in a statement, shared on Twitter.

"This unfriendly move under false and biased pretext delivers yet another serious blow to Russian-Canadian relations and will be met with resolve and reciprocity."

The Canadian government's decision follows a similar move by the U.S. and about a dozen European countries, which announced Monday that they were together expelling dozens of Russian diplomats as a sign of solidarity with the United Kingdom.

In response to Russia’s unacceptable behaviour, we’re expelling several Russian diplomats from our country. Canada will always stand in solidarity with the UK - and we’re committed to working with our allies to protect and uphold the safety & security of all our citizens. https://t.co/Bpb9064TMp

"We’re committed to working with our allies to protect and uphold the safety & security of all our citizens," Prime Minister Justin Trudeau said in a message posted on Twitter.

The U.S. announced it was expelling 60 Russians while Germany, France, Poland and more than a dozen other European countries were also taking action.

U.S. officials estimated Monday there are currently more than 100 Russian intelligence officers in the U.S., according to the New York Times.

British Prime Minister Theresa May last week expelled 23 Russian envoys in response to the nerve-agent attack against former Russian spy Sergei Skripal and his daughter Yulia in Salisbury on March 4.

A British police officer who stumbled upon the two as they lay unconscious on a bench outside a shopping centre was also hospitalized after coming into contact with the substance, but has since been released.

Russia, which has denied any involvement in the attack, subsequently expelled a similar number of British diplomats from Moscow, and has vowed to reciprocate against any other countries that kick out its representatives.

'Pattern of unacceptable behaviour by Russia'

Freeland added that the British attack is part of "a wider pattern of unacceptable behaviour by Russia" in recent years, including the annexation of Crimea, complicity in the Syrian war and disinformation campaigns.

“The nerve agent attack represents a clear threat to the rules-based international order and to the rules that were established by the international community to ensure chemical weapons would never again destroy human lives," Freeland continued in the statement.

“Canada fervently supports the measures that the United Kingdom has taken so far and remains resolutely committed to acting in concert with its allies.”

The House of Commons has passed a resolution blaming Russia for the nerve gas attack.

This isn't the first time Canada has expelled a Russian diplomat; such measures weren't uncommon during the Cold War while a handful have been ordered out since the current tensions between the West and Russia began in 2014.

But most recent expulsions have typically involved one or, at most, two Russians and they have remained relatively low-key affairs, without the type of language or co-ordination involved in Monday's mass action.

The Russian foreign ministry also protested the moves Monday, calling them "unfriendly" and a "provocative gesture" while accusing British authorities of failing to apprehend the real perpetrators behind Skripal's poisoning.

"It goes without saying that this unfriendly move by this group of countries will not go unnoticed and we will respond to it," the ministry added in a statement.

Russia expelled 23 British diplomats last week in response to London's decision to kick out 23 Russians, and has typically adopted a tit-for-tat approach when it comes to such expulsions.

Editor's note: This article was updated at 1:06 p.m. ET on March 26, 2018 with additional background information. It was updated again at 1:35 p.m. with a new statement released by the Russian Embassy in Canada, and at 4:05 p.m. to clarify how the Canadian government described the diplomats who were being expelled. A subsequent update was made at 4:40 p.m ET to add comments from Public Safety Minister Ralph Goodale.

Trump vs. U.S. intelligence? Intrigue abounds, and it starts with Russia

Freeland should be absolutely

Freeland should be absolutely ashamed of herself as the Russiaphobic dupe serving Washington's warmongering. Canada and other NATO slave states are being led into war by war criminals like neoconservative John Bolton who is Trump's newly appointed National Security Adviser. Bolton is one of the most dangerous men on earth.

Where is the peace movement when we need it most...

It's not implausible that

It's not implausible that Russia dunnit. But there isn't a shred of evidence. I dislike this guilty-unless-somehow-proven-innocent (and maybe even then) approach. And consider--it's well known, with plenty of actual evidence, that Israel assassinates people all the time. And I'm not talking about day-to-day slaughter of Palestinians, I'm talking about Israeli intelligence nailing people in hotel rooms and so on because Israel considers whoever it is to be a political threat. Happens mostly around the Middle East, but it's been known to happen in London and so on. But there's no chance we're going to ban any Israeli diplomats. And, hey, CIA anyone? So clearly we're not against Russia because they assassinate people, we're against assassinating people because it's (pinnable on) Russia.
If we're going to say countries are our enemy I'd be happier if we'd just admit it was because of geopolitical considerations instead of having to do all this hypocritical moralizing and lying about it.

Like this: The US considers itself the world hegemon in a unipolar world order. Russia wants to be a regional power in a multipolar world, and opposes the US agenda in the region Russia considers its backyard (and its buffer zone against invasion). This puts them at odds. We are a very close ally (not to say stooge) of the US, therefore Russia is our enemy too. Is that so hard? Do we really have to make crap up all the time?

Not even going to look into

Not even going to look into the validity of the UK claims? So far, there have only been allegations with no proof - "of a type developed by Russia", etc. Odd, since "The OPCW’s inspection teams have verified the destruction at seven chemical weapons destruction facilities in the Russian Federation. On 27 September 2017, the last of these facilities, located in Kizner, officially concluded its operations."