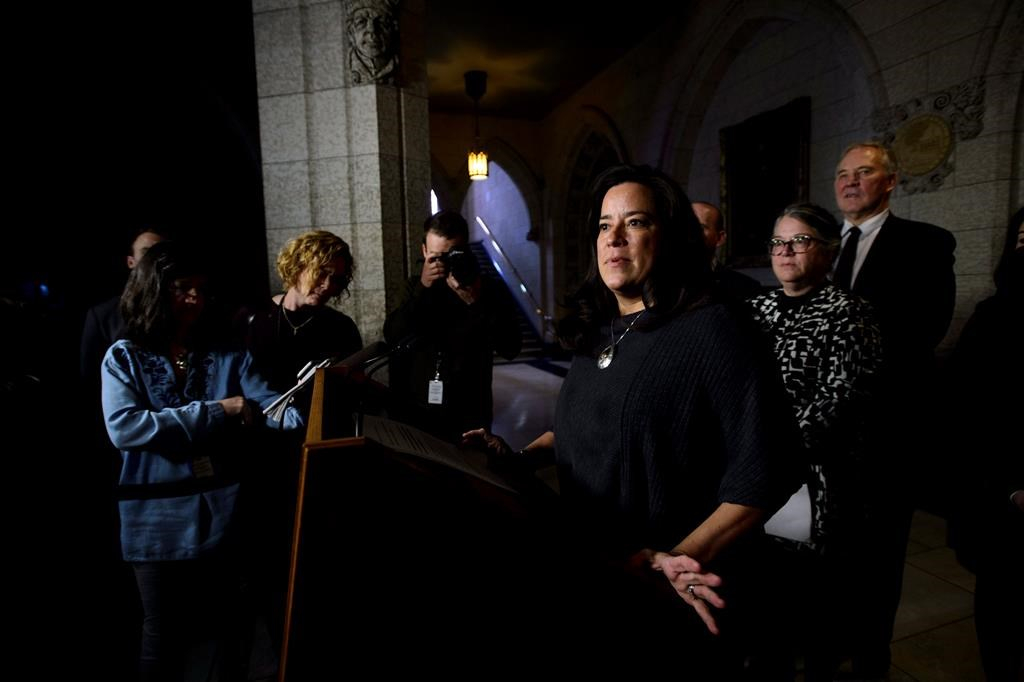 Justice Minister Jody Wilson-Raybould holds a press conference in the foyer of the House of Commons on Parliament Hill in Ottawa on Thursday, March 29, 2018., regarding the criminal justice system. Photo by The Canadian Press/Sean Kilpatrick
Previous story
Next story

The federal government is proposing major changes to the criminal justice system to address criticism that it's biased against Indigenous people and other marginalized groups, as part of sweeping legislation introduced Thursday.

The massive bill, tabled by Justice Minister Jody Wilson-Raybould, makes good on a Liberal promise to change the way juries are selected but makes no movement on reducing the use of mandatory minimums.

If passed, it would eliminate the use of peremptory challenges, which allow lawyers to reject jury candidates during the selection process without providing a reason for doing so.

That measure comes in the wake of criticism that a number of visibly Indigenous people were excluded from the jury that last month acquitted Saskatchewan farmer Gerald Stanley, 56, in the shooting death of Colten Boushie, 22, a member of the Red Pheasant First Nation.

"Our criminal justice system must be fair, equitable and just for all Canadians," Wilson-Raybould said.

Lawyers would still have the right to challenge a potential juror for cause, but the legislation would empower the judge to decide.

Speaking through a family friend, Boushie's mother, Debbie Baptiste, said she's pleased about the proposed changes and hopes the presence of Indigenous jurors will translate into more justice for Indigenous Peoples.

The prospect of something good coming out of her son's death gives her hope for the future, Eleanore Sunchild said on behalf of Baptiste.

The bill includes other measures aimed at tackling court backlogs plaguing the criminal justice system, including by restricting the use of preliminary inquiries to cases where an adult offender is facing the possibility of a life sentence, such as for murder or kidnapping.

That would reduce the number of preliminary inquiries across the country — about 9,100 of them in 2014-15 — by 87 per cent, said officials from the Justice Department who provided a technical briefing to reporters on the condition of anonymity.

The government also argues that restricting the use of preliminary inquiries will help prevent victims and witnesses who might have experienced trauma, especially in cases involving sexual assault or child abuse, from having to testify more than once.

The Ontario government had advocated limiting preliminary inquiries even more, to cases of murder and treason, but Attorney General Yasir Naqvi said he's pleased with how far the federal changes go.

Naqvi also said fewer preliminary inquires would free up resources that would more than compensate for a jump in summary convictions resulting from the extra powers the bill would grant judges to classify some previously indictable offences as summary and, therefore, directed to the provincial courts.

Ian Carter of the Canadian Bar Association applauded the inclusion of two reforms the group had promoted. They included allowing police to refer so-called administration of justice offences — such as breaching probation — directly to a judge without the need to lay fresh criminal charges and reforming the bail system to cut the number of people incarcerated while awaiting trial.

But those pros are tempered by the bill's proposed restriction on preliminary inquiries, Carter said, which would reduce the rights of the accused and possibly prolong trials.

"Two steps forward, one step back," he said.

A single day of a preliminary inquiry saves multiple days of trial time by narrowing the evidence, solving problems early and sometimes preventing a case from going to trial in the first place, said Ottawa-based defence lawyer Michael Spratt.

Spratt also criticized the abolition of peremptory challenges, saying the move could decrease diversity on juries.

"It seems to be a case of policy-based evidence making rather than evidence-based policy and we were promised better by the government," he said.

But University of Toronto law professor Kent Roach said the risk of juries becoming white in the absence of peremptory challenges is lessened by an additional reform that gives judges the discretion to rule when lawyers challenge with cause.

The bill will also address a Liberal campaign promise to crack down on intimate partner violence, including by reversing the onus on bail for those previously convicted of violence against a current or former spouse, common-law partner or dating partner.

Intimate partner violence would also be considered an aggravating factor in sentencing and the bill would allow for the possibility of higher maximum sentences for repeat offenders.

Prime Minister Justin Trudeau tasked Wilson-Raybould with reviewing changes to the criminal justice system and the sentencing reforms brought in by the previous Conservative government as part of its tough-on-crime agenda, including the impact on Indigenous Peoples and other marginalized groups.

That effort took on an increased sense of urgency in July 2016, when the Supreme Court of Canada imposed strict new limits on how long a case could take to make its way through the system.

More than 200 criminal cases across the country have since been tossed out due to unreasonable delays.

"Once passed, this legislation will have a real effect on court delays," Wilson-Raybould told reporters.

However, the bill does not address another major promised reform to address mandatory minimum sentences, which many advocates have argued also contribute to court delays.

Wilson-Raybould said she still wants to address that issue but needs more time.

"What we want to be able to do is advance sentencing reforms that will stand the test of time," she said.