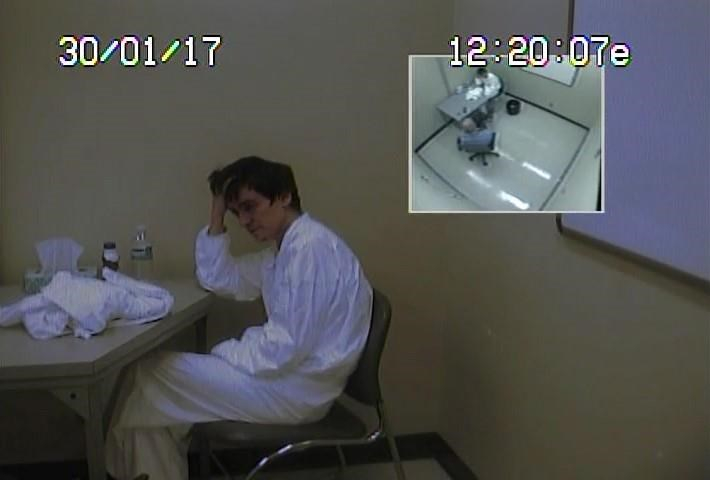 Police interview Alexandre Bissonnette on January 30, 2017, the day after the mosque attacks, in this still from an interrogation video shown by the Crown to the sentencing hearings in Quebec City in this handout photo by Sûreté du Québec
Previous story
Next story

The gunman who killed six men as they prayed in Quebec City in 2017 told investigators he went to the mosque because he wanted to protect his family from terrorist attacks, according to a video of his interrogation tabled in court Friday.

In the video recorded the day after the shooting, Alexandre Bissonnette told police how terrorists had killed scores of people throughout Europe.

And he "lost it" after learning Canada was preparing to take in more refugees.

"For sure, the terrorist attacks that killed so many people made me think of it," Bissonnette said, regarding the night of Jan. 29, 2017, when he entered the mosque and murdered the six men.

He said he wasn't a monster or a terrorist, adding he went to the mosque to save lives.

Instead of shooting himself "alone in the woods," Bissonnette said, thanks to his actions, "maybe 100 people will now be saved."

The recording was tabled into evidence by the Crown during Bissonnette's sentencing hearing.

Bissonnette pleaded guilty last month to six charges of first-degree murder and six of attempted murder in the shooting.

In the video, provincial police investigator Steve Girard gently coaxes Bissonnette to open up. The gunman cries, stirs in his chair and at times seems panicked.

Bissonnette, 28, first mentioned the 2014 terror attack in Ottawa, outside Parliament, then brought up the 2016 attack in Nice when someone drove a truck into a crowd of people, killing 80.

He said these acts planted the idea in his head he "needed to do something."

Bissonnette then listed a series of countries where terror attacks had occurred.

"It's going to come here," he said. "I saw that, and they are going to kill my parents, then my family, then me, too. I was sure of that. I had to do something.

"But it was something that was torturing me — for months. Every day, I was worried, anxious. I didn't know what to do. I wanted to kill myself because of it."

Hours before he murdered the six men he heard on the news Canada was going to welcome more refugees and "I lost it," Bissonnette said.

Girard asked him if he felt ashamed of his actions.

"It's not bad at all what I did," he responded.

Later in the video, however, he contradicted himself and said he did feel shame.

He also told the officer he had anxiety and wanted to commit suicide when he was 16.

He changed medication at the beginning of January 2017, he said, and started taking an anti-depressant called Paxil.

The sentencing arguments are expected to last about three weeks.

And were all checks followed for him to have guns?