By Dylan Sunshine Waisman | News | May 2nd 2018
#32 of 35 articles from the Special Report: Syrian Refugees in Canada
Photo of Syrian refugees in Vancouver on May 2, 2018, by Dylan S. Waisman
Previous story
Next story

Ola Al Abbas, a 19-year-old student, came to B.C. with her six sisters, two brothers and her parents. At first, she hated school and had difficulty understanding classes and making friends. Looking back now, two years later, her favourite class is English, and she hopes to keep studying after graduating high school. “I’m planning to study social work, and I wish to be like the ISSofBC, to help other immigrants and refugees,” she told National Observer.

She was referring to the Immigration Services Society of British Columbia (ISSofBC), which played a major role in supporting the Canadian government's efforts to resettle and integrate 3,600 Syrian refugees in B.C. in 2016. Over 40,000 refugees resettled Canada in that time, the largest resettlement in Canadian history.

The group released a report today that highlighted trends of the past two years’ worth of challenges and successes. The number of employed refugees doubled since last year, and 97 per cent of families said they were seeing their school-aged children succeed. But the challenges are daunting, they said, and point to systemic struggles faced by all newcomers to Canada.

Omar Al Adawi, an 18-year-old student in Grade 12, came here with his family two years ago, and now has two twin siblings who were born this year in Canada. He recounts his first experiences acclimatizing in Canada. "School was a very scary thing for me. I couldn't study very much, but I told myself, I need to have friends, I need to work on myself and improve my English."

He started attending English classes while attending grade 10, until he improved his language skills enough to find part-time employment. He now works at two restaurants while he finishes high school. Social studies is his favourite class, as he enjoys learning history, and in particular is fascinated with World War II.

Omar aspires to become a police officer after graduation, his motivation stemming from the officers he has met in Canada. “They have a sweet heart and all they want is to help you,” he said.

Tayybeh is a female-run catering business managed by women. Since National Observer featured their catering business in March, Tayybeh has grown in size, now employing six Syrian women, and is expanding its markets. Tomorrow, Tayybeh is opening its first food truck at Robson Square that will offer a traditional Syrian meal, with both meat and vegetarian options. Currently in the works is an expansion to bring their food to the shelves of local Canadian grocers as well.

Elwan explained what she’s learned from Raghda Hassan, one of the Syrian women at Tayybeh. “The Syrian culture is anchored in food. It’s such a deeply integral part of their life. I’ve learned that even if she goes home at 9 p.m after a long shift at work, she will still cook for her family...Food is fresh everyday. People don’t eat alone. You wait, wait, wait until your mom and dad or your children come home, and you eat together. You don’t eat to survive. Eating is a social thing. It’s to connect and to live.”

“If you do not have English fluency, it will limit your labour market abilities in this country,” said ISSofBC settlement services director Chris Friesen. Language was one of the key focus areas of ISSofBC's study, as it is a vital asset that Syrian refugees need to succeed in Canada.

Eighty-seven per cent of refugees who responded to the survey said their English had improved since arriving. However, attendance in language classes has dipped in the past two years, due to a lack of child daycare available, working hours interfering with class attendance, or health-related issues prohibiting refugees' ability to leave home.

“My worry is I can’t see my own children because during the day I go to work, and in the evening I go to learn English,” one refugee said.

46 per cent of Syrian refugees now have paid employment, more than doubling the number from year one.

But for many of those who were lucky enough to obtain employment, it still doesn't add up to a good living, as salaries often don't cover the basic standard of living in Canada.

"Everything is expensive. My son is paralyzed and only one son supports me financially and the rest of the family,” said one respondent.

Friesen highlighted a trend of self-employment and successful entrepreneurship, as an impressive way to circumvent the barrier of requiring Canadian work experience.

Despite some success stories, Syrians still face challenges entering the Canadian job market, because Canadian experience plays such a big part in the hiring process. 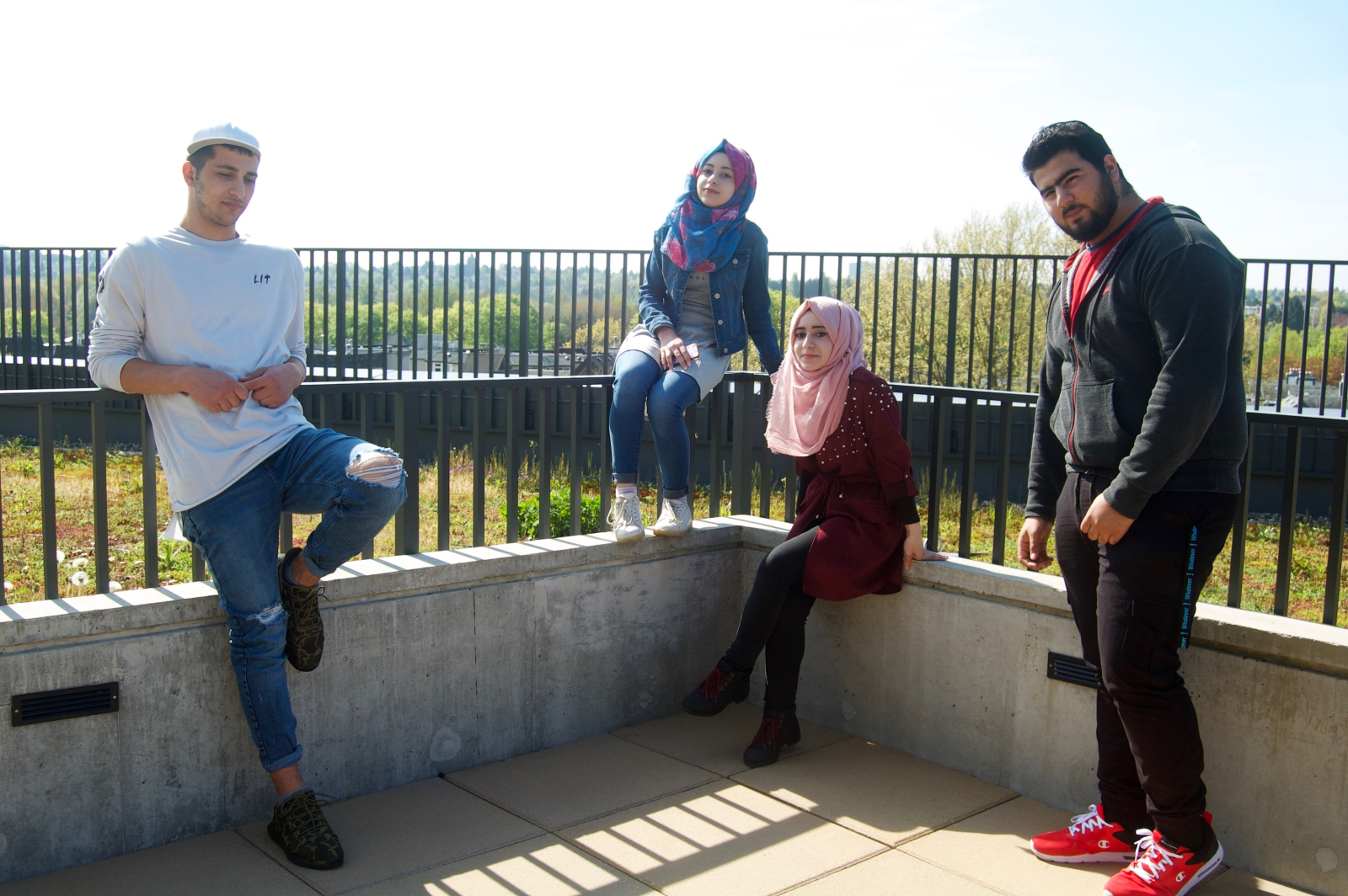 Ola Al Abbas, Omar Al Adawi, and two of their friends sit on the roof at the ISS of BC. Photo taken by Dylan Sunshine Waisman.

Fifty per cent of families reported their mental and physical health has improved in Canada, while 31 per cent said it stayed the same over the past year. A particularly concerning statistic is that 11 per cent of the families — around one in 10 — indicated that they were depressed. Friesen explained that these accounts reflect research that 10-15 per cent of families that have experienced trauma do not receive treatment. These numbers highlight an area to focus on in the coming year. "This has an impact on their ability to hold work, study, and successfully raise their families," in their new Canadian homes, he said.

“I am worried about [my] parents still in Syria and about [my] kids’ future and integration in society," one Syrian parent told ISSofBC. "My wife’s family and part of my family were all killed recently in an explosion in Syria.”

Another parent detailed the complexities of his situation, and the impacts on his family's mental health: "My daughter's health [is my primary concern]: she had brain surgery and was hospitalized for seven months. This has affected my wife emotionally and mentally. My other children are still in Turkey and Jordan. I am also worried about their well-being".

Despite the number of families who are experiencing depression, the majority said that their children were doing well in school. In total, 97 per cent of Syrian families reported that their children are faring well in elementary and high school. Though children are able to successfully integrate into the B.C. school system, university-aged students had a harder time adjusting. "I wish there was an effort to allow Syrians that have left their education midway to come here and continue school without facing huge barriers," one student said. Others explained that they already have university degrees, but their credits are not transferrable to Canada, and fees are too expensive to start all over again.