After thousands of years of history, Chief Ian Campbell wants to be the first Indigenous mayor of Vancouver 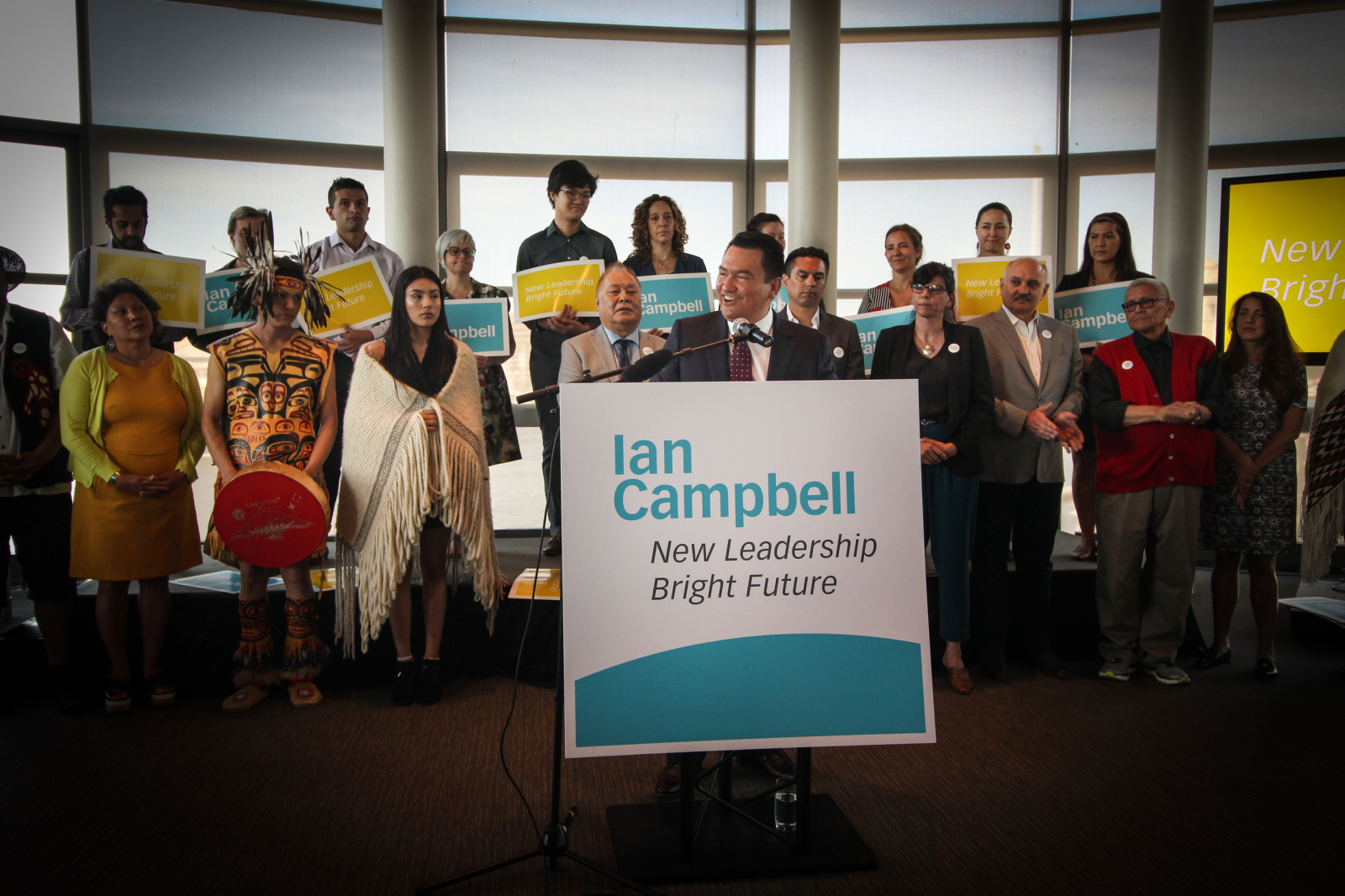 Backed by supporters, Chief Ian Campbell addresses the media scrum after his announcement he'll run for mayor of Vancouver. May 14, 2018. Photo by Emilee Gilpin
Previous story

Citing a connection to the land that "spans millennia," Hereditary Chief Ian Campbell of the Sḵwx̱wú7mesh Úxwumixw (Squamish Nation) has jumped into the race to be mayor of Canada's third most populous city.

Campbell made the announcement on Monday in Vancouver, formally joining the west coast city's current governing party, Vision Vancouver, which has been dominating city hall since 2008.

If successful, Campbell, a heriditary chief with experience as a businessman, negotiator and school teacher, would be the first Indigenous mayor to lead the City of Vancouver since it was founded in 1886.

"Having an Indigenous leader is something never done before (in Vancouver)," he said. "It's an opportunity to mature as a society and to inspire our young people that this possibility is there for them as well."

Campbell said he was a "proud direct descendent" of the of the Xats'alanexw (Khatsalano, later known as Kitsilano) family.

"That love and connection embedded in our language and teachings allows me to bring something that many of the other elected officials don't have — a true connection to this land that spans millenia."

"The love I have for the environment, for the city, for this place in the world, will transcend into all the decisions I make and help steer," he continued. "I think that brings tremendous value, to add to the value of what this city represents in a global context and who and what we attract to this part of the world."

"...This is a pivotal moment in our city's history," Campbell proclaimed at his announcement this morning at Waterview Special Event Space. "Everywhere I go, people have been sharing their concerns. They are worried if they have a seat in the canoe and if their interests will be heard."

Mayor Gregor Robertson and the Vision Vancouver party have dominated city government since 2008, but Robertson announced in January that he wouldn't be seeking re-election.

"Everywhere I go, people have been sharing their concerns. They are worried if they have a seat in the canoe and if their interests will be heard." #IanCampbell #vanpoli

Campbell will be running against NDP MP Kennedy Stewart, an outspoken pipeline critic and political scientist, who was arrested in March protesting the Kinder Morgan pipeline expansion and Shauna Sylvester, an independent progressive candidate with a long-standing record of environmental advocacy. Stewart and Sylvester are both running as independents. 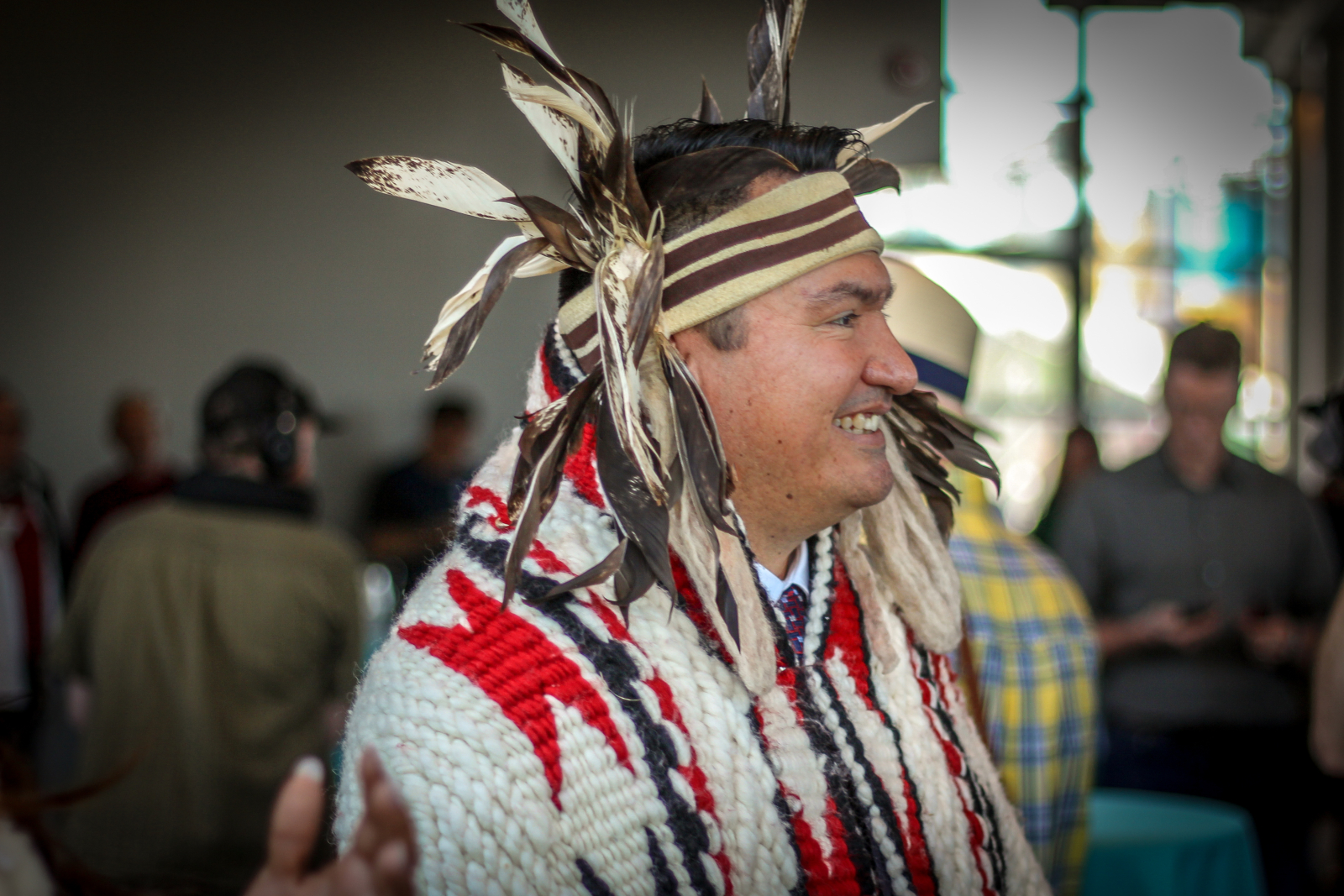 "My grandfather took me to the mount as a child and taught me about our Sḵwx̱wú7mesh ways," Campbell said. "My grandfather was sent to residential school, but he held onto our stories and our history. He remembered our language and our songs and taught me that life was about caring for each other, and the land."

These teachings will guide Campbell in his election campaign, he said.

Campbell first began working for the Squamish Nation in 1999, as a cultural ambassador and negotiator. At that time, the nation established its own land use plan and acquired forestry tenures that brought together competing interests, he said. By 2001, they forged Xay Temíxw, one of the first Indigenous-led land use plans in Canada, a blueprint Campbell said, that strikes a balance between economic, social and environmental values.

Campbell mentioned the hosting of the 2010 Olympic and Paralympic Winter Games, an event he said brought great attention and pride to his nation. Another milestone, he said, was the formation of the MST Development Corporation — a partnership between the Musqueam Indian Band, Squamish Nation and the Tsleil-Waututh Nation. Through the corporation, his nation says on its website that it co-owns six prime real estate properties throughout metro Vancouver that are worth over $1 billion.

"This agreement has moved parties beyond competition, to a place of collaboration," Campbell said.

Campbell told reporters that he wouldn't let his role with the MST Development Corporation interfere with his role as potential future mayor. He recognized a conflict of interest in maintaining his role as a negotiator for the corporation and said he is more than happy to step back and "pass the baton on to future generations."

He said these accomplishments were made possible through the Squamish understanding of success through "lifting each other up."

"The only way we are going to meet the challenges we face is if we can find new and exciting ways to lift each other up," he said. "I believe in Vancouver, but Vancouver is a young city and there is a lot of work that needs to be done. There’s no question that housing is a top priority. We need to reinvigorate the pride in our communities, the sense of belonging and the hope for a better future."

"I will not rest until people who work hard and play by the rules can afford to live in your Vancouver again. With progressive governments in Victoria and Ottawa, we need a mayor committed to negotiating and landing the dollars to make Vancouver affordable now."

Campbell said he is committed to working with partners to improve support for Vancouver residents that are struggling to find affordable housing.

While one of his rivals, NDP MP Stewart, has prominently criticized the proposed Trans Mountain pipeline expansion, Campbell didn't mention the Kinder Morgan project in his speech. But he said that the city deserves a mayor who can protect the environment.

"People need to know they have a clean environment and that they have a government that cares just as much about protecting the coast as they do," he said. "Vancouver has made some innovative progress in the last decade and I have seen space created for many people and new ideas about what it means to lift each other up. I want to be a part of this transformation." He said his strong environmental focus is why Vision Vancouver — which put forward an ambitious plan in 2011 to become the world's greenest city by 2020 — was the "right fit" for him.

"Ian's family has been rooted in the City of Vancouver for thousands of years," Ginger Gosnell-Myers, Campbell's campaign manager, told National Observer. Gosnell-Myers is Nisga’a and Kwakwaka'wakw, and has spent the last five years as the city of Vancouver's aboriginal relations manager, where she created and implemented the framework for Vancouver as the world's first "City of Reconciliation." She said Campbell has experience to create "on the ground action" around Vancouver's biggest problems.

"It’s a new era in city politics, and I think it’s exactly what we need at this point in history," she told National Observer. "Ian is not only business-savvy, he has a tremendous amount of experience governing in the Squamish Nation and he loves and understands this city in a different way....he knows its history and its future. And that can only benefit us all."

Berman, who recently announced she was taking on a new role as the deputy director of campaigns and communications at conservation group Stand.earth, said also touted Campbell's business experience, noting that the Squamish Nation was the largest developer in the city.

She added that she has known Campbell for the past six years. She met him when they were both appointed to former BC Liberal leader Christy Clark's climate leadership panel — "a difficult job," she said.

"We were trying to reconcile the Liberal government's so-called climate aspirations with their economic plans," she said. "We achieved a consensus of recommendations with the majority of the industry and municipal representatives at the table. It was hard, but Ian was an incredible leader in that process."