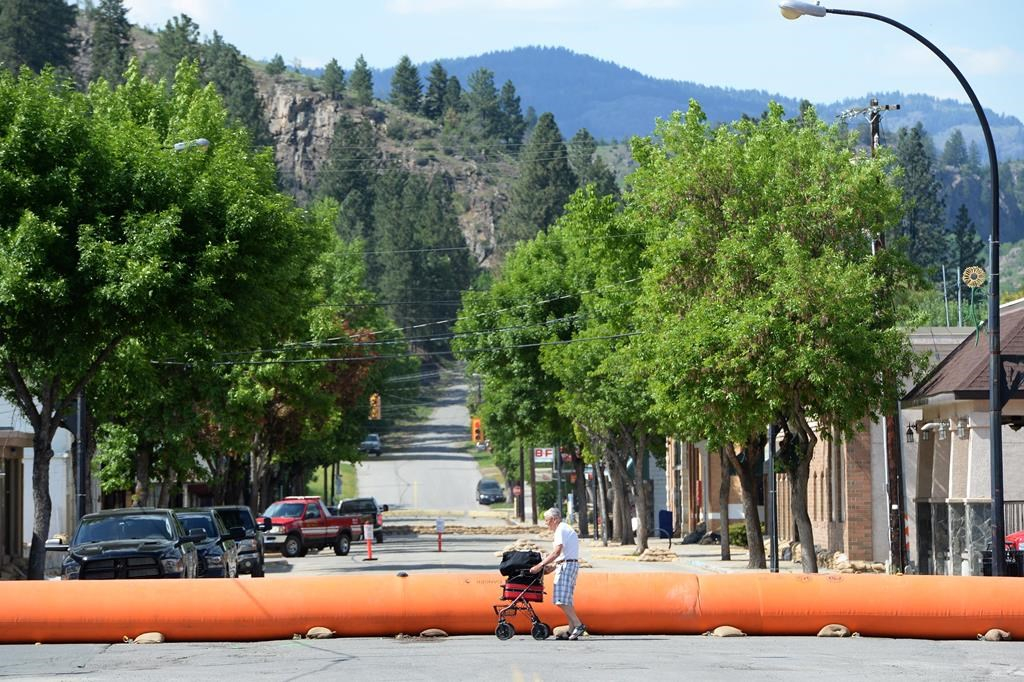 An elderly man walks pass a water dyke with his luggage on his walker near the Kettle River in the almost deserted town of Grand Forks, B.C., on Wednesday, May 16, 2018. Photo by The Canadian Press/Jonathan Hayward
Previous story
Next story

As more evacuation alerts are issued and river levels rise in British Columbia, Premier John Horgan announced Wednesday his government will match Canadian Red Cross donations for those most harmed by the flooding.

Horgan invited Liberal Opposition Leader Andrew Wilkinson and other politicians to attend the news conference in Chilliwack in a show of "unity of purpose."

"We stand together united to make sure that there be no stone unturned, no sandbag unfilled. And whatever resources are needed we all commit to make sure they are there for the people of the region, up and down the Fraser and all of the rivers, creeks that could potential be affected in the days ahead."

The politicians took a helicopter tour of the flooding of Fraser Valley before the news conference.

"Today we've seen that it's within a metre of causing an outright disaster. We've seen hay bales in the farmers' fields soaked with water. We've seen farmland under water already and there's worse to come in the next week."

Horgan said the province will match donations made to the Red Cross of up to $20 million.

"I encourage people to dig into their pockets to make a contribution and the province will match that," Horgan said.

Evacuation alerts were extended Wednesday to more areas of B.C.'s Fraser Valley as the Fraser River nears flood stage along with several other waterways in the province.

The Metro Vancouver regional government issued an evacuation alert for tiny Barnston Island, in the Fraser River east of Vancouver, affecting about 150 residents.

Donna Gilmore owns the Painted River farm and has lived on the Barnston Island property since the 1960s. She says all farmers living in an area where natural disasters can occur should have plans in place to evacuate their livestock.

"There's always an issue when you move livestock because you're upsetting their proverbial apple cart," she laughed in an interview Wednesday.

She said her beef cattle will be relatively easy to relocate, but she has some concerns for the goats if they have to leave.

"You've got mothers and babies that you have to make sure are going to a safe and secure spot. They're going to be eating different feed and drinking different water than they're used to, so there's a few days of transition."

The Ministry of Transportation said ferry service between Barnston Island and mainland would be adjusted based on the Fraser's water level. If the water rises over 6.5 metres at the gauge in Mission, B.C., the ferry can only continue operating until the dock becomes submerged.

David Campbell of the B.C. River Forecast Centre said in an information meeting earlier this week that the centre expected the water to rise to 6.5 metres on the Mission gauge by this weekend or early next week.

Data provided by the federal government shows the water level has not been measured over 6.5 metres at the Mission gauge since the early 1970s.

With the evacuation alert in place for Barnston Island, the ferry is now operating around the clock, though no large animals will be allowed on the ferry under an evacuation order, the ministry said.

The Township of Langley has also issued alerts for low-lying areas along the Fraser River such as Brae and McMillan islands, and an evacuation order was posted Monday by the City of Chilliwack for three homes outside protective dikes.

Officials are keeping a close eye on the level of the Fraser River along its length from Prince George southward and the River Forecast Centre says there is the potential for flooding this weekend in the Prince George and Quesnel areas.

Emergency Management BC says the Boundary region and Similkameen Valley are seeing significant flooding, while risks are also high across the Shuswap and Okanagan, with Okanagan Lake due to reach full capacity by Friday.

More than 1,500 properties in the southern Interior city of Grand Forks remain on evacuation order as a second round of flooding is imminent, compounded with a forecast of rain or thunderstorms beginning Wednesday. (The Canadian Press, CKPG, CKIZ)

Residents across B.C. Interior brace for another deluge of flooding