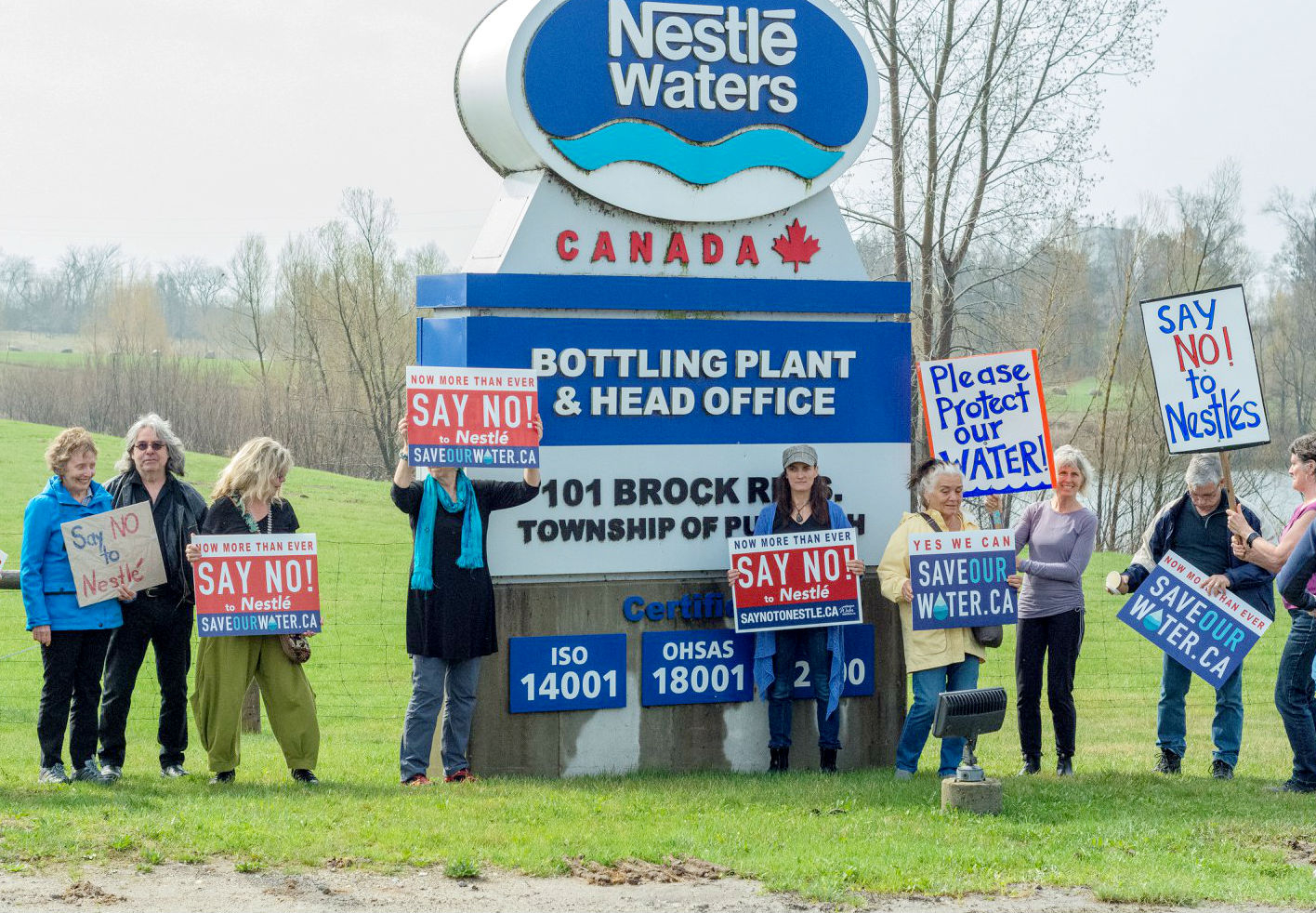 Demonstrators call for an end to bottled water and corporate water extraction in Ontario during a rally outside the Nestlé bottling plant in Guelph, Ont. on May 4, 2018. Photo by Gord Harris
Previous story
Next story

As the clock ticks down on Ontario's provincial election, some of the candidates may find themselves in hot water over calls to keep water in the hands of Ontario residents, and out of the hands of big corporations.

A campaign by the non-profit Wellington Water Watchers — endorsed by Greenpeace Canada — is urging Premier Kathleen Wynne to “establish policy and regulations that phase out the bottled water industry in Ontario.” The group is collecting endorsements for the campaign from MPPs and candidates, and highlighting them on its Facebook page.

In January last year, Wynne's government placed a two-year moratorium on water extraction permits after food and beverage titan Nestlé bought a well in the southern Ontario village of Elora, inside Wellington County. The move triggered outcry from county residents, who want to keep well as their future drinking water source.

While the moratorium period has been counting down from Jan. 1, 2017, Nestlé and other water bottling companies with previous permits have been allowed to extract 7.6 million litres of water daily across the province.

According to Greenpeace Canada, the extraction has got to stop.

“Bottling water for profit in single-use plastic bottles that are designed to be used for minutes, and then pollute for centuries, is an irresponsible business practice and it needs to end now,” said Greenpeace campaigner Farrah Khan in an email to National Observer.

More than a hundred thousand signatories

During the campaign for the June 7 provincial election, some environmental groups in Ontario are calling to make the moratorium permanent.

“Bottling water for profit in single-use plastic bottles that are designed to be used for minutes, and then pollute for centuries, is an irresponsible business practice,” says @FarrahNaazKhan of @GreenpeaceCA #onpoli #plastic

In addition to the Wellington Water Watchers, the SumOfUs Canada Society has gathered more than 117,000 signatures supporting its campaign to phase out extraction permits "for water corporations like Nestlé."

The two organizations commissioned a poll of 2,003 eligible Ontario voters for World Water Day, March 22. It showed that 64 per cent of voters across party lines support phasing out water extraction permits in Ontario over the next decade, and 52 per cent support a phase-out within the next two years. The margin of error for the survey is plus or minus 2.23 per cent and is accurate 19 times out of 20.

In announcing the poll results, representatives of both organizations suggested political leaders would be wise to take note of the findings during the election campaign.

Greenpeace's Khan asserted that Nestlé has a track record “as a corporation that mismanages natural resources, ignores community concerns, and is a major contributor to the growing plastic pollution crisis.”

“We understand that water is a passionate topic and we all want to protect the groundwater resource to ensure it is here for generations to come,” she said in a written response to questions.

She said there is "a significant lack of understanding" about how much (water bottling companies) actually use. “As an example, most residents in Ontario are not aware that bottlers... use less than 0.1 per cent of permitted water takings in the province," she said.

When asked about the growing concern of plastic waste in Canada, Kerr replied that Nestlé Waters Canada has "reduced (the) amount of plastic in our bottles by 60 per cent over the past 10 years. Our bottles are 100 per cent recyclable.”

​Nestlé Canada’s water bottles are made entirely of PET (polyethylene terephthalate), a highly recyclable plastic that can be reused to make a variety of materials such as car seat fabric, carpets, and sound insulation layers in dashboards.

“We believe that the very first priority of our industry should be to boost PET collection and recycling rates, and we are working with the Canadian Beverage Association on pilot projects in public spaces to increase recycling,” Kerr wrote.

Plastic pollution is a chronic problem. Greenpeace Canada says a mere 10 to 12 per cent of the three million tonnes of plastic waste generated in Canada each year is recycled, while the rest goes into to landfills or oceans where it breaks down into microplastics and enters the food chain.

China made headlines last year by announcing it would no longer accept international shipments of single-use plastics for recycling. That left countries like Canada struggling with where to send mountains of plastic waste, including millions of used Ontario plastic water bottles.

“Extracting and bottling water for profit puts a strain on our natural resources that should be publicly available and not a money-making scheme for corporations such as Nestlé,” said Khan. “In order to stop the plastic pollution crisis, bottled water producers like Nestlé should not be allowed to use public resources for their own profit.”

Greenpeace advocates a plastic-free future and recently launched a “Million Acts of Blue” toolkit urging the public to refuse single-use plastics and push for sustainable changes in their communities.

Questioned by National Observer, Ontario's major provincial parties declined to provide details on their plans — if any — to address calls to make the Ontario water extraction moratorium permanent, and put a cap on bottled water production.

Instead, a spokesperson for the Liberals cited recent measures taken to “strengthen and further protect our groundwater during our time in office," including the two-year moratorium on permits, and a proposal to raise water bottling fees to $503.71 per million litres — a significant jump from the scant $3.71 companies paid before the spike.

The Liberals also are “committed to reducing waste and increasing resource recovery,” said the spokesperson, citing the government’s 2016 implementation of the Waste Free Ontario Framework — a strategy designed to move Ontario into a "circular economy" that keeps resources in use for as long as possible. The framework supports such strategies as greater reuse and recycling of waste, reducing waste emissions, and placing responsibility on producers to manage their discarded products.

The New Democratic Party responded to requests for comment by referring National Observer to its campaign platform, which does not state a position on phasing out water permits. The official platform states that if elected, the NDP will “prioritize planning for water needs now and for future generations based on the public interest and sustainable public access to water.”

“Bottled water operations would be low on the priority list and I think that would be important just to establish the right for public drinking water.”

Schreiner also said the Green Party’s first priority is to create a cleaner economy in Ontario.

“So much of our economy today is based on fossil fuels, including plastic industries, and if we can transition off fossil fuels onto renewable energy and bio-based products, that would solve a lot of the social and environmental challenges that we face,” he explained. “And we could do it in a way that creates jobs and prosperity for our communities.”

Hundreds of jobs at stake

Phasing out the bottled water industry in Ontario would be big step to reducing plastic pollution while protecting water sources. According to a Toronto economist, however, it would also cost hundreds of Ontario jobs.

“If you try to save (plastic water bottling) jobs and that prevents innovation, it’s a really bad idea because you doom the future,” Eduardo Souza-Rodrigues, a University of Toronto assistant economics professor, told National Observer.

“There’s always a cost. This is how markets work in general. You have some innovations, people lose jobs, other people get new jobs, and in the longer term people are employed and we have a better set of products available.”

In 2008, Toronto City Council banned the sale and distribution of plastic water bottles on all city property effective in 2012. The ban was intended to promote and improve access to tap water while reducing waste.

To date, the municipality does not have data on how effective the move has been.

“It would be difficult to provide the estimated number of water bottles that have been diverted from landfill as a result of the ban at City facilities,” Toronto communications officer Paula Chung wrote in response to questions. “Solid Waste Management Services does not have any baseline or post-ban data on the amount of water bottles recovered/diverted from City facilities.”

Forty-five parks around the Toronto area exempted from the ban as there isn’t yet sufficient access to public water.

This amazing new milk is going to change everything

Good work Katie! But I am so

Good work Katie! But I am so amazed and disgusted I have no comments.