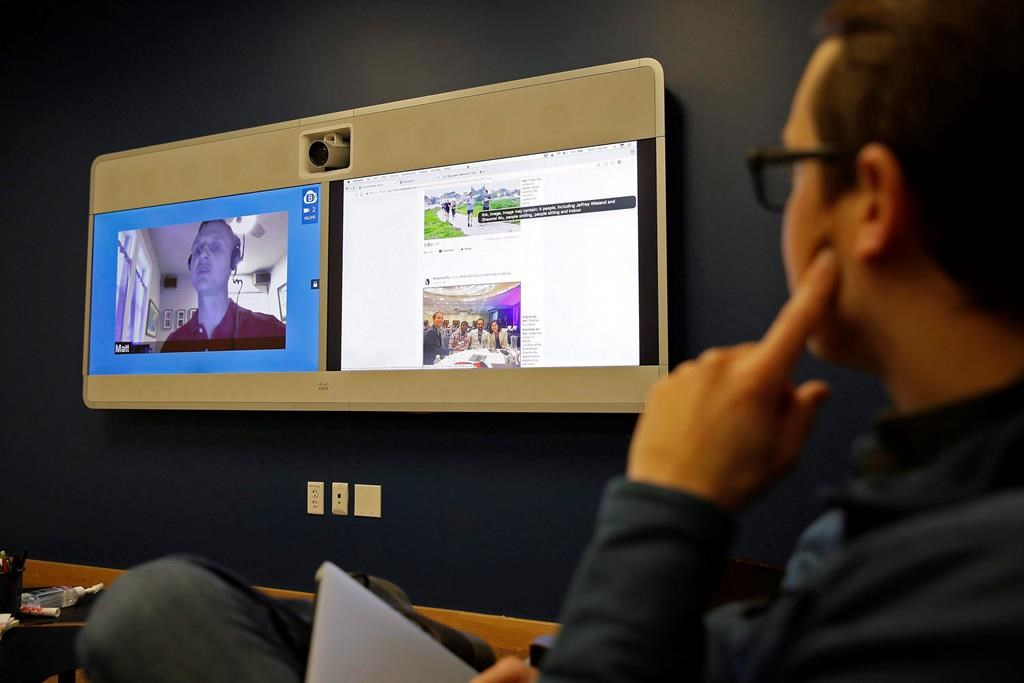 In this photo taken on Dec. 18, 2017, Jeff Wieland watches as engineer Matt King, who is blind, demonstrates facial recognition technology via a teleconference at Facebook headquarters in Menlo Park, Calif. File photo by The Associated Press/Eric Risberg
Previous story
Next story

Based on recent announcements by the likes of Facebook, Live Nation and a U.K. police force, Canadians may need to get used to the idea of facial recognition technology permeating their everyday lives.

Many smartphone users are already used to having their devices unlocked with facial recognition and no longer think twice about it.

Then Facebook announced in April that it would be enabling a facial recognition feature in Canada and Europe that was already active elsewhere in the world. The feature automatically tags Facebook users in uploaded photos and is being framed as a tool against false impersonation on the social network.

And concertgoers did a double take earlier this month when Live Nation hinted that facial recognition technology might allow attendees to pre-register a photo and then waltz into a venue without presenting a ticket.

It sounded like a sci-fi future to many — and more than a little creepy to some — but a Canadian company already pulled off a similar feat at a recent high-profile event.

Winnipeg-based Mexia One partnered with the Mobile World Congress trade show in Spain in February to allow the 107,000 attendees to opt-into an entry line powered by facial recognition technology. Some 4,225 attendees agreed to getting their faces scanned by the company in exchange for easy access.

Beyond the technological challenges to contend with, there's a lot of work that needs to be done in convincing users that their biometric data will not be misused, said Mexia One founder and CEO Glenn Tinley.

"But we firmly believe facial recognition to be the state of where things move going forward," Tinley said, adding that some airports are beginning to test similar concepts.

Recent news involving the South Wales Police offered a cautionary tale about the current state of the technology and how it could be used to fight crime.

But police statistics revealed that during the soccer event the facial recognition technology accurately identified only 173 people of the 2,470 that were flagged, a 93 per cent false positive rate.

"You're talking about over 2,000 people falsely accused of something, who would be inconvenienced, and it's unclear if those false accusations disappear," said David Murakami Wood, a Canada Research Chair in surveillance studies and associate professor at Queen's University.

"What it shows is that side of the technology in those types of contexts is still not a mature technology you can actually rely on. And you can't just dismiss that as the police have."

The facial recognition software has since been used by South Wales Police at other sporting events and concerts and "with each deployment of the technology we have gained confidence," the police force said in a statement posted on its website.

"Since we introduced the facial recognition technology no individual has been arrested where a false positive alert has led to an intervention and no members of the public have complained."

While Wood said the situation in South Wales still pales in comparison to the kind of public surveillance that takes place in China, cautiousness about that kind of technology making its way to Canada is warranted.

"China is a warning, it's not something we should be complacent about to say, 'Well, they're so different from us.' No. Thank God we're not an authoritarian (state) like China ... and Canada is very much behind the times in these areas, that's a good thing too. We don't have comprehensive video surveillance in most cities in Canada — long may it continue."

Some privacy experts have expressed concerns about the undisclosed plans for a proposed high-tech community in Toronto being prepared by Sidewalk Labs, which is owned by Google's parent company Alphabet.

Sidewalk Labs has revealed very little of its vision for Toronto but has publicly mused about tying video cameras to traffic lights, which could extend green lights as needed to allow elderly citizens to safely cross the street.

Andrew Clement, a professor emeritus with the University of Toronto and member of an arms-length panel of advisers on the project, said the state of public surveillance in China should inform discussions about the Sidewalk Labs plan.

"We should be thinking about what China is showing it's technically capable of. I don't want to exaggerate and conflate the Chinese government with these corporations but I think we do need to be very mindful of them and we need now, at this stage, to be building robust protections that will prevent slippages in the future," Clement said.

"We can see how quickly, surprisingly, disturbingly political winds can shift in the West."