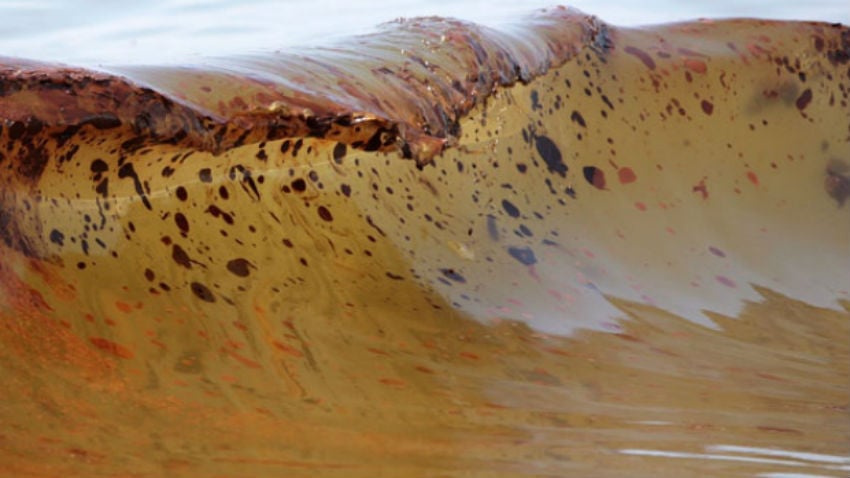 The federal government has authorized Canada’s embattled pipeline regulator to allow use of a controversial toxic substance that caused major damage during the Deepwater Horizon spill in the Gulf of Mexico.

Corexit 9500A — a chemical known to seriously harm marine life including fish, shellfish, and coral — is intended to be used by industry after an offshore oil spill. Critics say the chemical is dangerous and describe the oil spill response process as "polluter decides."

Corexit has been hotly-debated since it was added to the list of federally-approved spill-treating agents in 2015, and was kept there by the Trudeau government in spring 2016. It has yet to be deployed in Canadian waters and the decision to do so now rests with the National Energy Board (NEB) which bases its oil spill response on an environmental evaluation from the oil and gas company responsible for the damage.

It’s a supreme conflict of interest, environmentalists argue. The guilty oil company has an inherent interest in controlling costs but produces the evaluation. And the decision is made by the NEB which has been under fire for a series of controversies involving private meetings with pipeline company officials, allowing substandard parts, weak responses to spills and explosions, and allegations that it has been captured by the energy industry.

The environmentalists want Corexit to be banned in Canada.

Corexit, in its many chemical varieties, has been around since the late 1960s. The 9500A version made headlines when more than 8.3 million litres were sprayed into the Gulf of Mexico to help clean up nearly 760 million litres of oil spilled during the BP’s Deepwater Horizon accident in 2010.

The chemical breaks oil into smaller globules that naturally-occurring microbes can munch on, reducing the surface slick affecting the shoreline, and eventually, allowing the oil to biodegrade. Environment and Climate Change Canada (ECCC) lauds it as a “highly effective” substance in laboratory performance screening tests that has low toxicity in aquatic toxicity tests at concentrations anticipated during actual use. The U.S. Environmental Protection Agency also acknowledges it as "generally no more or less toxic than the other available alternatives."

But real-world experience in the Gulf of Mexico proved that Corexit can be deadly: scientists who studied the spill found that the substance makes oil up to 52 times more toxic to marine plankton and decreases survival rates for baby corals exposed to the oil-chemical mix. It can also damage the gills of marine life like zebrafish and blue crabs, according to One Green Planet, which linked Corexit to the deaths and injuries of more than 8,000 birds, sea turtles, and other marine mammals over six months after the devastating spill.

It’s a tradeoff for governments and oil companies, explained Vince Palace, an aquatic toxicologist for the Winnipeg-based International Institute for Sustainable Development (IISD).

“Over the long term, by increasing the surface area of the oil, you’re also increasing the potential for the oil to be degraded by microbes in the environment,” he explained. “But it can actually increase the toxicity of it over the short term...

“Are we going to have an oil slick that will persist for a longer period of time and be exposed to more biota [organisms], or a more acutely toxic plume by applying the Corexit but for a shorter time?”

In an email, ECCC told National Observer that a “best-in-class approach” was used during its review and approval of Corexit 9500A in 2015 using extensive evidence from research studies, tests, and real-world experience.

But the federal Environment Department won't be the one deciding how and when the substance would be deployed by industry. Instead, the decision to deploy Corexit is made by Canada's offshore regulators, including the NEB, the Canada-Newfoundland and Labrador Offshore Petroleum Board, and the Canada Nova Scotia Offshore Petroleum Board. Their verdict is made on a case-by-case basis using a net environmental benefit assessment that considers the pros and cons of different spill response options in order to minimize environmental and socioeconomic impact.

The conflict, according to Greenpeace Canada, is that a number of these regulators have demonstrated allegiance to the industry they oversee. The NEB is particular, has been plagued by conflict of interest concerns that include an appointed contractor who did work for the Texas-based oil giant Kinder Morgan, investigation and audit reports that were revised and watered down by industry, and an overall cozy relationship between the board's senior management and the companies it is supposed to regulate.

“These boards have conflicting mandates where they’re supposed to promote the oil industry, regulate it, and protect the public from the negative impact of the oil industry,” Greenpeace campaigner Alex Speers-Roesch told National Observer. “Sometimes you can’t do both.”

Adding fuel to the fire, said Daniel Green, a deputy leader of the Green Party in Quebec, is the fact that the offshore operator responsible for the oil spill is also responsible for conducting the net environmental benefit assessment. Corexit is a much cheaper solution than deploying an arsenal of industrial booms, skimmers and the personnel to operate them, Green pointed out, and in dispersing the oil rather than collecting it, the chemical makes the problem disappear more quickly — visually, at least.

“It’s polluter decides,” he told National Observer. “And oil companies — the first the thing they think about when they see oil on the water is how to minimize costs. This is why oil companies immediately stand up and say, ‘It’s our spill we’ll take care of it.’ Because they control the cost by doing that.”

When asked about this alleged conflict of interest, the NEB told National Observer via email that spill-treating agents can only be used if its chief conservation officer approves it, it is likely to achieve a net environmental benefit, and the officer has consulted with the ministries of natural resources, Indigenous and northern affairs, and the environment:

"The NEB is an independent federal regulator and its priority is the health and safety of Canadians and the protection of the environment. A company applying to the NEB for an authorization must demonstrate they have sound environmental protection, mitigation and safety measures in place before they are given an authorization to conduct any work." **

As the Harper government deliberated adding Corexit 9500A to the list of federally-approved spill-treating agents in 2015, WWF Canada tried desperately to stop them.

The conservation group sent a six-page letter to then-environment minister Leona Aglukkaq urging the ministry not to approve a “potentially deleterious” substance, citing the havoc it wreaked during the Deepwater Horizon spill, and holes in government science that assumed if Corexit worked well during lab tests, it would work just as well in the open ocean.

"Under real world conditions, where it’s difficult to deploy the dispersant in exactly the right place at exactly the right concentration and so on, it turns out that only 10 to 40 per cent of the oil is driven into the water columns," said Rob Powell, WWF Canada's senior officer for priority conservation programs.

"And what more recent research shows is that... what happens when you apply dispersants, which contain small hydrocarbons in the solvent portion, is that it actually can favour microbes that are good at munching on the dispersant over those actually capable of munching on the oil. So instead of getting increase biodegradation of the oil, you actually get decreased biodegradation of the oil.”

A letter from WWF Canada sent to the federal government in 2015 contests the effectiveness and safety of Corexit, in an attempt to halt its approval in Canada. Letter provided by WWF Canada.

Indeed, tests cited by the U.S. Environmental Protection Agency have shown that Corexit is only 45 to 55 per cent effective in dispersing of various types of crude oil. Such inconsistent results make Corexit a "wild guess" and "rolling of the dice," argued Speers-Roesch of Greenpeace Canada.

"The cardinal rule is these kind of situations, as any doctor can tell you, is do no harm," he explained. "We shouldn’t be dumping chemicals that we have lots of evidence can actually make the situation worse, onto an oil spill.”

Both Greenpeace and WWF are calling for a ban on Corexit in Canada, while Daniel Green of the Green Party calls for more federal oversight for oil spill response in Canada.

Environment and Climate Change Canada has said it would only consider removing Corexit 9500 from the list of spill-treating agents (STA) if it is determined the product "is not suitable" for use in Canada, and that changes to the regulation could only come after new findings on the risks of the dispersant are incorporated into a net-environmental benefit assessment.

By The Canadian Press | News, Politics | August 2nd 2016
Race to a Safer World