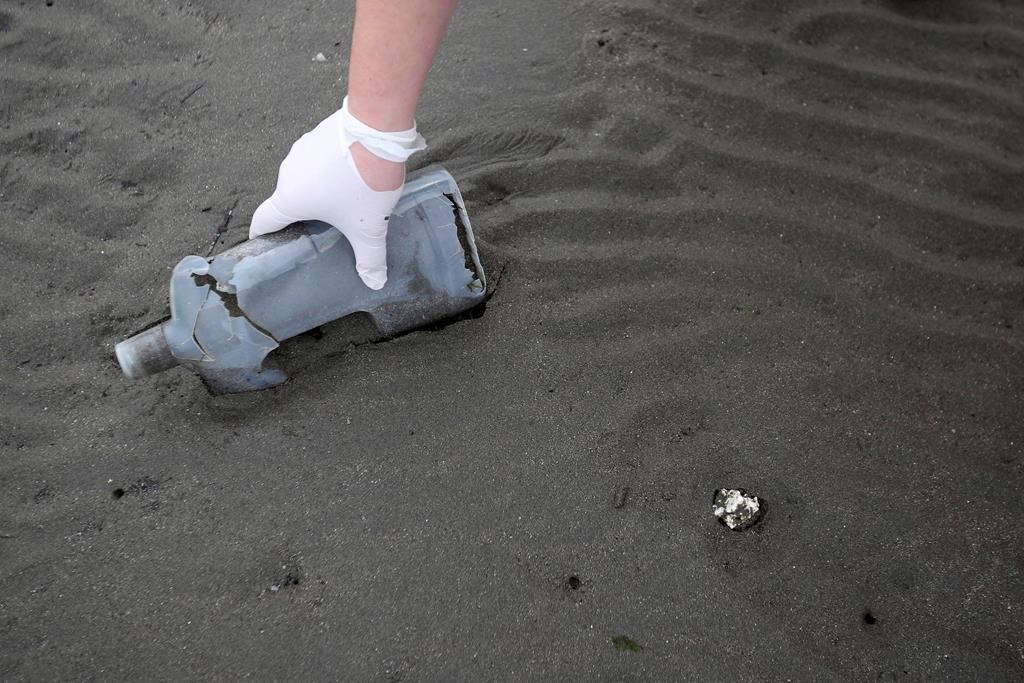 Dozens of environmental groups say if Canada wants to be a leader in getting the rest of the world to kick its plastics habit, it has to start by setting the bar for recycling plastics far higher at home.

Prime Minister Justin Trudeau wants this week's G7 leaders summit in Quebec to include the signing of an anti-plastics charter, setting international targets to cut down on the use of plastics and finding ways to include more recycled materials in the plastics we do use.

Estimates show up to 10 million tonnes of plastic garbage ends up in the oceans each year, and across the oceans there are multiple islands of trash, including one in the Pacific that rivals the size of the province of Quebec.

The G7 plastics strategy is to have four main components: targets for reducing the amount of plastic waste produced around the world, domestic strategies to meet those targets, working with industry to develop better products to replace plastic or make plastics more easily recyclable, and assistance for the developing world to adopt better waste management.

But Canada is going into the G7 without a national plan to address plastics, and more than 40 non-governmental organizations released a declaration on Monday calling on Trudeau to set national targets for how much plastic Canadians should recycle and what percentage of new products should be made from recycled materials.

"We're challenging the Canadian government to work with provinces, territories, Indigenous governments, municipalities, to put together a plan to ensure that Canada achieves zero plastic waste," said Ashley Wallis, program manager at Environmental Defence, one of the organizations that signed the declaration.

Other items on their list are legislation to require producers of plastics to pay to collect and recycle the plastic they produce, and a regulation to ban any plastics or additives to plastics that are toxic or difficult to recycle. They also want Canada to implement policies for federal procurement that require anyone selling or providing a service to the federal government to have a plan to recover all plastics used, and that the plastics used contain at least 75 per cent recycled content.

Environment Minister Catherine McKenna launched consultations for a national plastics strategy in April, but has set no deadlines for when one might be produced. Wallis said having at least an outline of Canada's domestic plans by the time McKenna hosts G7 environment ministers in September would allow Canada to credibly consider itself a leader on this file.

At least an outline of domestic plans by the time @ec_minister McKenna hosts #G7 #environment ministers would allow Canada to credibly consider itself a leader on the anti-plastics file, says Ashley Wallis of @envirodefence

McKenna has previously said establishing a national strategy is complicated by the fact recycling and waste are usually governed by provincial legislation and carried out by municipalities. Wallis noted Canada overcame similar issues for climate change by developing a national framework and setting national targets and then allowing provinces the room to develop local policies that would meet those targets.

The Federation of Canadian Municipalities echoed that sentiment Saturday when municipal leaders voted in favour of a resolution calling for a national plastics strategy, including targets to help reduce the amount of plastic that ends up in the ocean. Vicki-May Hamm, the new FCM president, said municipalities know Ottawa can't act alone to manage plastics — but neither can municipalities.

Sounds like more big government PR...we'll announce global targets, look good in the press, but have no national strategy. Look where that has taken us regarding greenhouse gases....straight into the arms of Kinder Morgan and transnational energy companies!!!

You don't care about all the little fishes in the worlds oceans, if you're a bit enough Fish yourself...and global corporations are certainly up there. So by all means...lets work with the Big Fish to save the little fish we all actually depend on.

It's turned out well so far. For the Big Fish running Corporate Planet Earth....what could possibly go wrong?

I've been recycling every

I've been recycling every sort of plastic I can for year. My home community takes more different kinds than most other places.

What a travesty, therefore, to find out recently that much of our recycled plastic gets sent to China for processing and, oops, quite a bit of that gets tipped into the sea. Hello Pacific Gyre, have some more of my carefully cleaned, separated, and recycled plastics tied into big bundles and set free.

It's not enough to do the right thing at the personal end of recycling, or even via various government plans and laws, because corporate interests can do all manner of other, untoward things that worsen the situation, then presto didgo, they can dissolve and disappear, never having to account or pay for their practices, then rise like Phoenixes the next day, to carry on.

What safeguards do we have against these corporate "persons" doing the usual of privatizing the profits to be made from plastic recycling, maximizing return through sloppy and illegal practices, while leaving the messes and costs for taxpayer dupes, who can't disappear and reappear when convenient, to clean up?