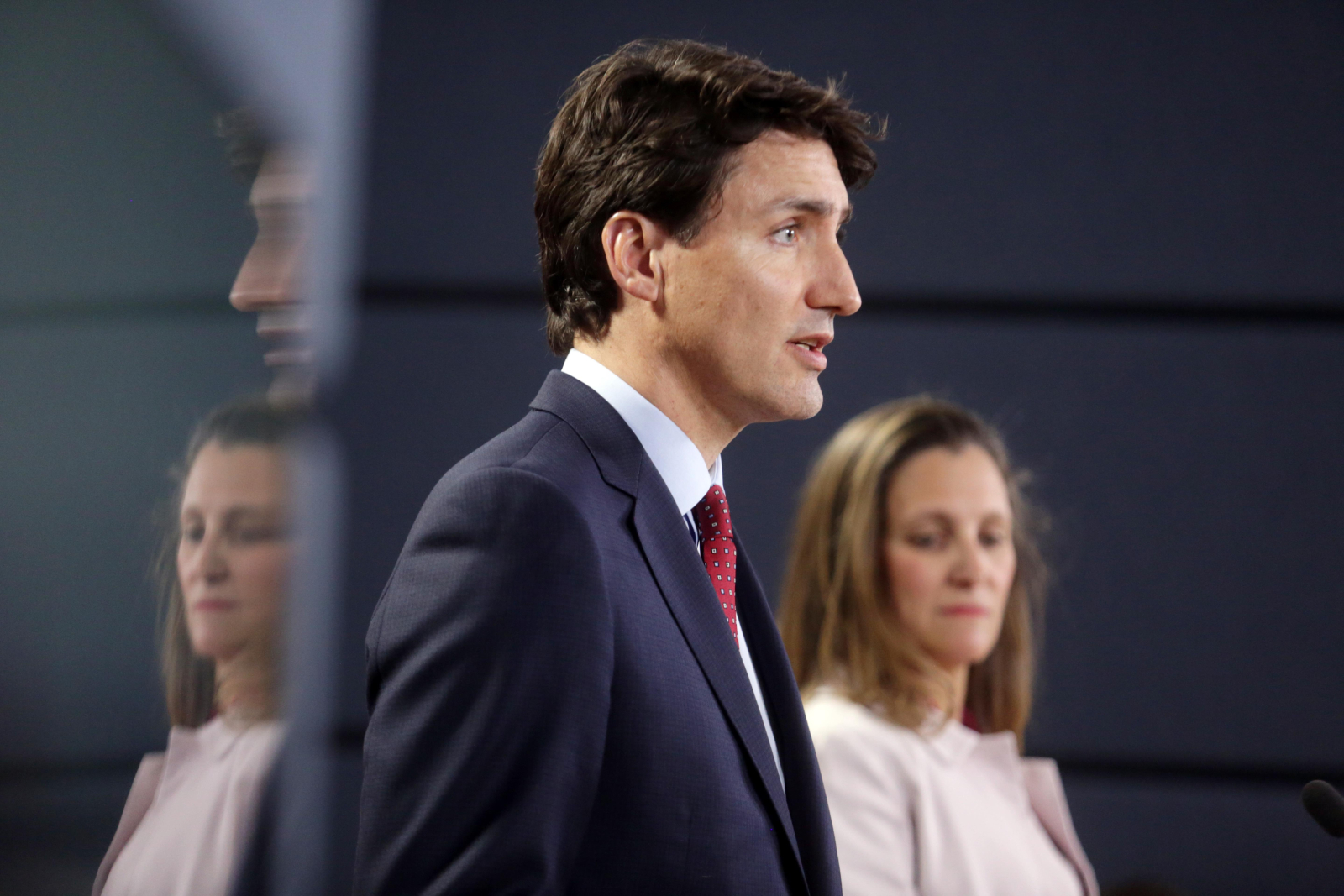 Prime Minister Justin Trudeau boasted on Monday about achieving what Stephen Harper could never deliver as the Liberal government's right and left-leaning opponents pressed him in the House of Commons to explain why a Texas energy giant used a government “bailout” as a platform for $3 million in bonuses for its executives.

Trudeau made the comments during a testy exchange with Conservative Leader Andrew Scheer who questioned the prime minister about details uncovered last week in a report by National Observer about the fine print of the government’s $4.5 billion offer to buy Kinder Morgan’s Trans Mountain pipeline system and its proposed oil and tanker expansion project on the west coast.

The report revealed that Kinder Morgan Canada’s board of directors approved retention bonuses of $1.5 million for two executives on May 28, one day before Trudeau’s cabinet approved the deal to buy the Texas company's Canadian assets.

Trudeau has defended the government intervention, arguing that the project, supported by oil-rich Alberta, is critical to the Canadian economy and to financing a transition toward cleaner energy. The prime minister also said last week that the government was stepping in to save the project because Kinder Morgan felt it was too “risky” and wanted to abandon it.

“Last week, he announced that he’s forcing Canadians to pay $4.5 billion for his failure to get Trans Mountain built,” Scheer said in the Commons. “Now it’s bad enough that the prime minister is sending money to Texas to invest in American projects, but now we learn that he’s paying two executives over $3 million in bonuses. Why is it that every time the prime minister bails out a big company, executives get paid off?”

#QP 2/ @AndrewScheer Kinder Morgan: Why is it that every time PM bails out a big company, executives get paid off? @CanadianPM We've moved fwd in securing pipeline to new markets across the Pacific…Public investment's often been part of developing resources... pic.twitter.com/9dl2EmKzoz

Trudeau, who was scheduled to visit two spots along the pipeline in B.C. and Alberta on Tuesday, said the Liberal government was succeeding where former prime minister Harper had failed. He said the Liberals were opening a door for Alberta, home to the world’s third largest oil reserves after Saudi Arabia and Venezuela, to find new markets in Asia by pursuing the Trans Mountain project, which links oilsands producers to a terminal in the City of Burnaby, in metro Vancouver.

“It’s absolutely ridiculous. Up until now, the prime minister has turned his back on his promise to cut subsidies to the oilpatch and he’s still letting the rich get richer," said @RE_Brosseau. "Bravo, champion."

The Trudeau government has also said it has no plans to own and operate the pipeline in the long-term, and is hoping to sell it to back to the private sector, once it has a buyer or buyers. The new ownership could include First Nations, the federal and Alberta governments have said.

“For ten years, the Conservatives tried and failed to get our resources — oil resources to markets, other than the United States," Trudeau told the Commons. "They couldn’t get it done. We’ve actually moved forward in securing a pipeline to new markets across the Pacific — something they were unable to do... I know it’s a shock to the Conservatives, but public investment has often been part of developing our natural resources, going back decades. They, however, are trapped in their ideology and continue to play politics with thousands of good jobs for Albertans.”

This wasn’t the first time the Tories criticized the Trudeau government for allowing executives to profit from a taxpayer-funded bailout of a large corporation.

In the spring of 2017, the Conservatives criticized the Trudeau Liberals after the government offered a $373 million interest-free loan to Bombardier, which then offered raises of up to 50 per cent to its top executives. These included CEO Alain Bellemare whose annual compensation increased from $6.4 million to $9.5 million. That bailout prompted protests which later led the Quebec-based transportation company to announce it was deferring the raises until 2020.

In the case of Kinder Morgan, the company indicated in a filing with the United States Securities Exchange Commission that its Canadian president, Ian Anderson, and its vice-president responsible for the Trans Mountain expansion project, David Safari, would each be offered a $1.5 million retention bonus if they keep working for Kinder Morgan until July 2020. The company said this amount was “consistent with industry practice” for the transaction.

Left-leaning New Democratic Party MPs, including Nathan Cullen from B.C. and Ruth Ellen Brosseau from Quebec, joined the Tories in denouncing the bonuses.

“The two highest officials for the Trans Mountain project are each pocketing $1.5 million in bonuses,” said Brosseau, the MP for the Quebec riding of Berthier-Maskinongé. “It’s absolutely ridiculous. Up until now, the prime minister has turned his back on his promise to cut subsidies to the oil patch and he’s still letting the rich get richer. Bravo, champion.”

Trudeau responded by quoting a disputed industry claim that Canada is losing $15 billion in revenues every year because oil companies don't have enough pipelines to get their product to markets.

(Economist Robyn Allan, former president and CEO of the British Columbia Insurance Corporation, recently pressed the government to explain where they got this $15 billion estimate and found that they had no evidence to back up their claims.)

Trudeau also fended off accusations that his government was violating the Constitution by ignoring the right of Indigenous people to be consulted about the project, noting that some First Nations support the expansion.

#QP 6/ @RE_Brosseau Kinder Morgan exec bonuses: Does PM think there's nothing strange about these bonuses?@CanadianPM We're losing $15B/yr by not having other markets besides U.S. for oil exports…Important to have access to new markets via reliable means… pic.twitter.com/KKmkAGAu4b

Finance Minister Bill Morneau, who led the federal negotiations with Kinder Morgan, told the Commons that the government wanted to focus on the “good news” about the deal.

“For those families who are relying on a strong energy sector, we are doing exactly what we should do: a project in the national interest that will secure the industry and at the same time create thousands of new jobs,” Morneau said in response to a question from Conservative Shannon Stubbs, MP for the Alberta riding of Lakeland. “Therefore, for Alberta workers and British Columbia workers, I am so pleased that we have Liberal members who are supporting what we are doing on behalf of those workers, and I am disappointed that the members across the way are not supporting those workers.”

But it wasn’t clear whether all of Morneau’s colleagues in cabinet supported the work he did in negotiating the deal, including its bonuses for Kinder Morgan executives.

Environment and Climate Change Minister Catherine McKenna defended the government’s decision to approve the Trans Mountain project, but declined to comment about the federal plans to buy the project and offer bonuses to the company executives.

“I’m not going to talk about the financial aspects of this project,” McKenna said following a morning cabinet meeting. “We obviously had a full cabinet discussion and we have the lead minister, which is the finance minister. But when we made this decision, and this decision, this project approval for the Trans Mountain pipeline expansion — twinning of the pipeline — this was made over a year ago."

There is fierce opposition to the oil pipeline tanker expansion project in British Columbia, where opponents have concerns about spills as well as pollution that would push Canada's climate change goals out of reach. B.C.'s NDP government was elected to form a minority government, propped up by the provincial Green party in 2017, after campaigning to stop the Kinder Morgan project.

McKenna, who represents the federal riding of Ottawa Centre, noted that the decision to approve the pipeline expansion had been approved by the previous B.C. Liberal government led by former premier Christy Clark, in response to new federal investments to protect Canada's oceans and improve emergency marine response planning.

"Obviously that was very important to the people of British Columbia," she added. "And we think that when you make decisions, investor certainty is extremely important and you also need to take serious actions to protect the environment and that’s what we’ve done.”

When asked why she declined to comment about the financial deal to buy the pipeline, McKenna's spokeswoman said that the minister supported the government's decision.

"As you know, cabinet discussions are kept in confidence," said spokeswoman Caroline Thériault in an email to National Observer. "The prime minister ensures there is an open discussion on all decisions that cabinet makes, and the minister supports the decision made by cabinet."

The federal and Alberta governments have also argued that the project fits within each of their respective climate change plans. Neither government has explained details how their respective plans would help Canada meet its international commitments under the 2015 Paris Agreement.

There is no disputing climate

There is no disputing climate science, if you are ethical and responsibly informed. To continue to advance pipeline and fossil fuel projects when we are faced with escalating and extraordinarily costly climate destabilization is indisputably immoral and purposely ignorant.

Both the LPC, which has pushed through this project, and the Conservatives, who wish they had done so themselves, but with a lower purchase price, are indisputably immoral, purposely ignorant, and almost entirely self-serving. Yes, we need jobs for energy workers, but we need them in renewable energy and in energy efficiency and public and active transit. Otherwise, our children are left holding the bag, and that bag is increasingly filled with a stinking mess, thanks to our "leaders".

Whenever I hear First Nations

YUP. But.....they have internal problems. Alot of bands saying they were not consulted by their chiefs....still arguing about who should be chief too.