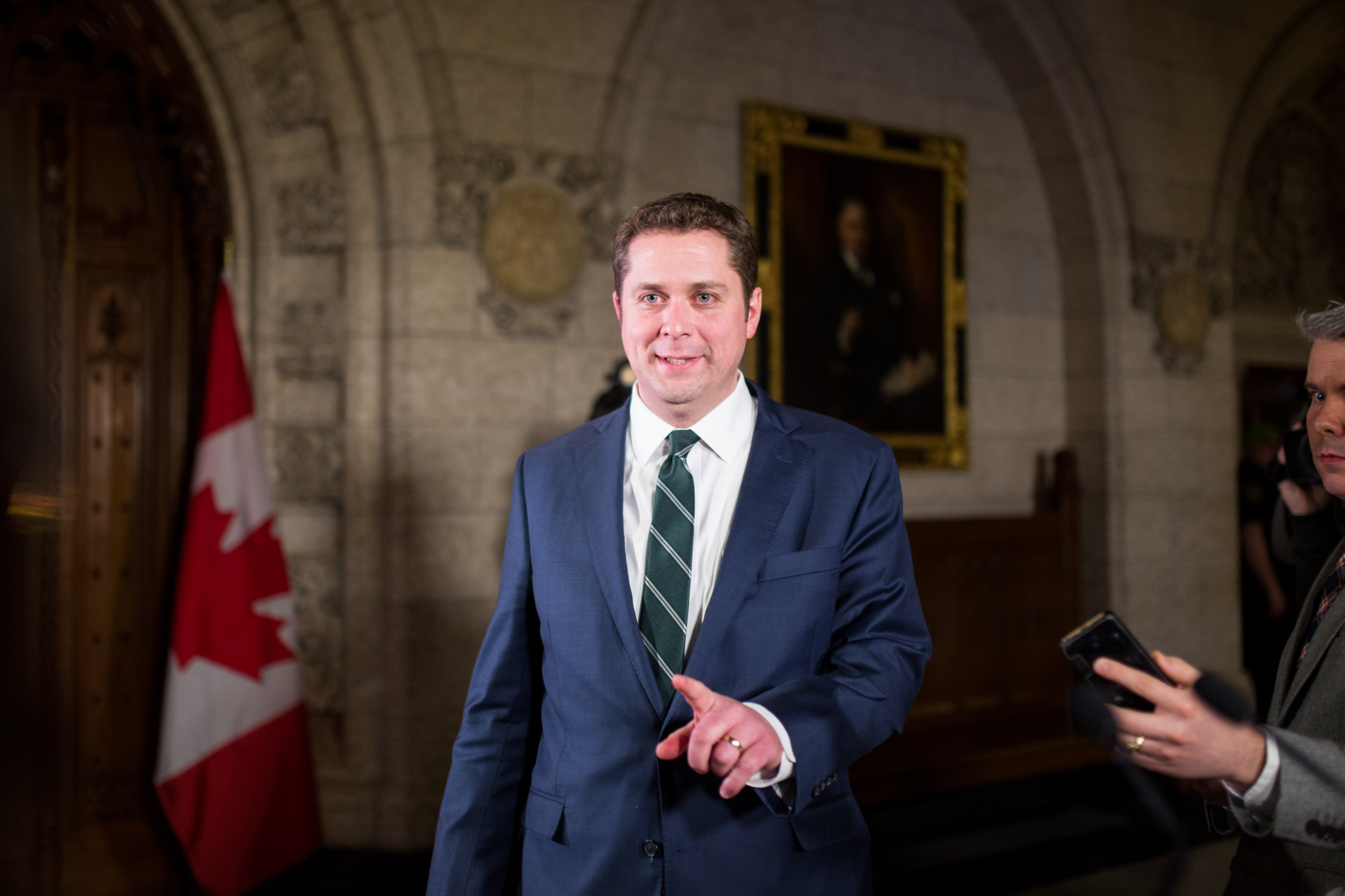 Scheer made the comments on Twitter in response to a National Observer report that quoted United States Securities Exchange Commission filings. The news report revealed that two Canadian executives at the pipeline company had each been offered $1.5 million retention bonuses in connection with the Trudeau government's offer to purchase Kinder Morgan's Canadian assets for $4.5 billion.

While the oil pipeline and tanker project has split the country in recent public opinion polls, Trudeau's offer to buy the Kinder Morgan assets appears to have united both the right and left-leaning opposition parties in Ottawa. Scheer has blamed Trudeau for failing to resolve political uncertainty that led Kinder Morgan to threaten to abandon its expansion project.

'We're going to get it back to the private sector,' Morneau said

Trudeau has blamed the Conservative government, led by former prime minister Stephen Harper, for causing the public to lose confidence in federal approvals of major projects after it dramatically changed Canada's environmental laws in 2012 to reduce federal oversight of industry.

While the oil pipeline and tanker project has split the country in recent public opinion polls, the Trudeau government's offer to buy the Kinder Morgan assets appears to have united both the right and left-leaning opposition in Ottawa. #cdnpoli

Finance Minister Bill Morneau said that the government offered to buy the assets since it believed that this was the only way to complete plans to expand the Trans Mountain pipeline system. The Trudeau government approved the project in November 2016, arguing that it would be part of an overall climate change strategy by generating revenues to fund a transition to a low carbon economy. The government said the project would be commercially viable since it would ensure that Canadian oilsands producers — which are operating in the world's third largest reserve of crude oil after Saudi Arabia and Venezuela — have new markets in Asia to sell their product.

Kinder Morgan had said it believed the project was too "risky" for it to proceed due to political opposition in B.C., Trudeau said earlier this week. The company also told National Observer on Saturday that the bonuses were "consistent with industry practice for a project and transaction of this size."

Morneau said the government eventually planned to sell the assets back to the private sector, as soon as it finds a new buyer. He explained that once the project is completed, the risks of failure would be lower, making it a more attractive investment.

Solomon didn't ask Morneau directly about the bonuses offered to executives, and the finance minister's office has declined to say whether he knew about these bonuses prior to the federal cabinet's decision to approve the offer to buy the Kinder Morgan assets.

'Our money paying for this bonus,' said Nathan Cullen

Aside from Scheer, NDP MP Nathan Cullen also questioned why taxpayers were being asked to foot the bill for the bonuses.

"The day before Trudeau bailed out Kinder Morgan the two top executives were promised a $1.5 million bonus," Cullen, who represents the northwest B.C. riding of Skeena-Bulkley Valley in Parliament, wrote on Twitter on June 1. "From you, me and every single Canadian. Yeah that’s our money paying for this bonus."

The Green Party also weighed in. "What a deal!" said Green Party of Canada Leader Elizabeth May in her own tweet, that appeared to have a hint of sarcasm.

The day before Trudeau bailed out Kinder Morgan the two top executives were promised a $1.5 million bonus.

From you, me and every single Canadian. Yeah that’s our money paying for this bonus. https://t.co/APZ3wDi8zL

Morneau, who was in the resort town of Whistler, B.C. on Saturday for meetings with his G7 counterparts, received a boisterous greeting from local opponents to the Kinder Morgan project.

“We are going to pay for this for generations to come,” said Whistler resident Myra Graham, among dozens of Kinder Morgan opponents who gathered to send Morneau a message about his support for the Trans Mountain project.

She also said that many media outlets are failing to tell the story about rising opposition to government support for fossil fuels.

“We’ve got to make noise, we’ve got to come out and most importantly we have to start doing some civil disobedience to get this message through," she said.

Another resident who helped organize the gathering said she was at a loss for words when she read about the bonuses offered to executives.

“Not only did they walk away without building anything, they’re now being rewarded," said Pina Belperio. "They’re laughing all the way to the bank and they must think the government in Canada is a big joke as well if that’s the kind of handouts they’re giving out. It’s disgusting.”

'That is the man that struck the deal'

The federal government plans to expand the capacity of the 65 year old pipeline system from 300,000 barrels of oil per day (bpd) to 890,000 bpd, by building its twin to run from the Alberta oilsands to B.C.'s coast, where it can be shipped globally. The company has estimated that the expansion project will cost $7.4 billion dollars.

B.C. is fiercely opposed to the plan, which is facing numerous legal challenges in court, including a judicial review at the Federal Court of Appeal, led by six First Nations, the cities of Vancouver and Burnaby, and two environmental organizations.

Graham and Belperio remained outside of the conference centre used to host Morneau's G7 meeting Saturday morning for about three hours, chanting, ringing cowbells and banging pots and pans. As Morneau exited the conference centre in his chauffeured car, driving across the street to his hotel, some of them shouted at the vehicle and attempted to block it in its path.

"Morneau is here. This is the man that struck the deal. It’s outrageous," said Burnaby resident Maurie Jackson, who drove two hours to Whistler to protest Morneau's pipeline deal. "We’ve got to work from the top down, and he’s the person that needs to hear this."

"I’ve been self-employed my whole life. I’m not against business, I just want it to be done responsibly," Reid said. "The Government of Canada is not conducting their business responsibly."

A crowd of protesters also descended on Burnaby Mountain in the metro Vancouver area, with over a 100 estimated participants gathered. Protesters listened to speeches, sang songs, and "re-branded" the Kinder Morgan Burnaby tank farm by pasting 'sold' posters over Kinder Morgan's signage, along with contact information for the prime minister's office.

"Here on Coast Salish land, this resistance is getting bigger and stronger," Cedar Parker George, a Tsleil-Waututh Nation member and youth leader, said to the rally. "The people are standing up. This is more than a pipeline issue. This is an issue of how the Canadian government treats First Nations and local communities.”

Unlike the frequent arrests that take place as the focal point of Burnaby's Saturday morning rallies, this week saw no arrests. In light of the B.C. Crown prosecution service declaration that they would seek seven days jail time for anyone arrested after May 28th, organizers advised protesters not to risk arrest.

Kinder Morgan opponents have also made plans to stage protests at the riding offices of their local Liberal MPs, across Canada on Monday, to voice their opposition to the new $4.5 billion deal.

Scheer would have done the

Scheer would have done the same. Maybe given them a billion or two extra. He's just mad he's not the guy in position to get the kickbacks.

I'm not so sure. Scheer isn't

I'm not so sure. Scheer isn't as stupid as Trudeau.

"Morneau said the government eventually planned to sell the assets back to the private sector, as soon as it finds a new buyer. He explained that once the project is completed, the risks of failure would be lower, making it a more attractive investment."
As usual, the pretence that the private sector is the one that takes risks falls apart under closer examination. We the people get stuck with the risks, once that's done with the private sector (that is, a few already filthy rich dudes) takes the profits.

This government tells us the

This government tells us the pipeline was supposed to "generate revenues to fund the transition to a low carbon economy." But now it's generating 4.5 billion dollars of liability for taxpayers. That money could have gone directly into funding the transition to a low carbon economy. This contradictory behaviour makes their lies transparent. They are only in the business of representing and funding the wealthy 1%.