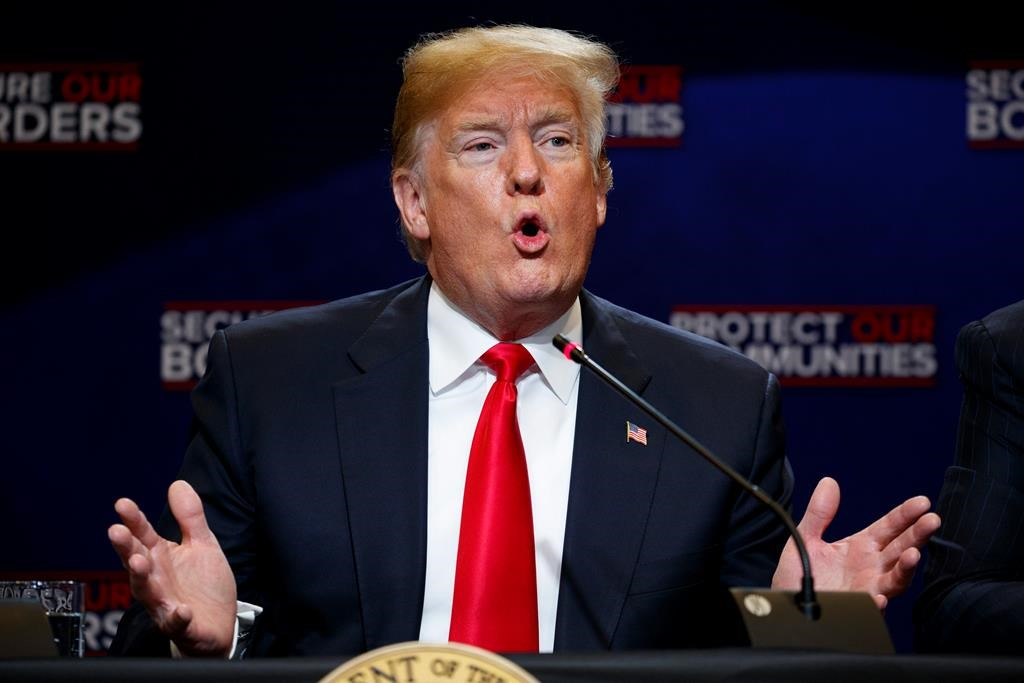 United States President Donald Trump will miss a significant portion of the G7 summit which kicks off June 8, 2018 in Quebec. File photo by The Associated Press
Previous story
Next story

Donald Trump will miss the G7 meeting on climate change, Canadian government officials confirmed Thursday, as he departs the summit early on Saturday morning before the leaders’ scheduled meetings are completed.

The U.S. president would have been included in a G7 working session devoted to "climate change and clean energy" on the second day of the summit, officials had confirmed earlier this week.

Instead, just hours before what’s expected to be a combative Canadian debut at the G7 summit, Trump fired off a series of angry tweets directed at Prime Minister Justin Trudeau, French President Emmanuel Macron and the European Union on trade issues.

Trump accused Trudeau of being "indignant" for "bringing up the relationship that the U.S. and Canada had over the many years and all sorts of other things."

The U.S. president’s personal attack on the prime minister heightened the potential for confrontation when the two leaders have their first face−to−face meeting in Canada on Friday after Trump’s arrival. The G7 summit is being held in La Malbaie, a small municipality in the Charlevoix region of Quebec.

Earlier in Ottawa on Thursday, Trudeau offered Trump some qualified kudos on his North Korea peace efforts, along with Macron and Japanese Prime Minister Shinzō Abe. The praise gave Trump a brief respite from criticism over the punishing steel and aluminum tariffs he has imposed on his G7 partners.

But the positivity didn’t last.

No 'sugar-coating' from Canada, says official

Trump has taken several measures that have infuriated fellow G7 nations, such as abandoning the Iran nuclear deal and backing out of the Paris climate accord.

"We’re not sugar−coating the fact that there are strong differences of opinion and there are going to be tough discussions on a number of things that we don’t agree on," a senior Canadian government official said late Thursday in response to Trump’s tweeting.

Before heading off to La Malbaie, in Ottawa, Macron and Trudeau offered an olive branch of sorts by offering Trump a modest measure of support in his historic meeting in Singapore with North Korean leader Kim Jong Un following the G7 summit.

But they also made it clear that it won’t keep them from pushing Trump to end the tariffs, and they reaffirmed their support for "strong multilateralism" — something Trump has little time for.

"Please tell Prime Minister Trudeau and President Macron that they are charging the U.S. massive tariffs and create non−monetary barriers," Trump wrote in another Twitter post.

In March, Trump first announced the imposition of tariffs on imports of steel and aluminum, but he gave Canada, Mexico and the European Union a waiver. The steel tariffs also affect the other G7 member, Japan, which was never granted a waiver.

Macron came to Ottawa ahead of the G7 summit in part to talk strategy with Trudeau on how to deal with a mercurial president who likes to be liked. They found a way to praise him on North Korea, even if it was tempered by other complaints.

Trudeau offered the G7’s support during the Thursday press conference in La Malbaie, saying it’s important "to demonstrate the solidarity of the world’s leading industrialized economies behind the president’s efforts on the Korean Peninsula."

Macron said: "We’ll all be behind him to support this essential initial initiative in the fight for global denuclearization."

But the French leader quickly added that Trump can’t expect credibility on that file while he undoes all the good work done to date on pushing Iran to abandon its pursuit of nuclear weapons.

"Because we want President Trump to be strong and successful in his negotiation with North Korea, we want the international community to be credible on the Iranian nuclear program."

On a collision course with the G7

Most recently, Trump pulled the U.S. out of the Iran nuclear agreement, following his earlier decision to withdraw from the Paris climate accord. The nuclear agreement included Germany and the five permanent members of the United Nations Security Council, which includes France and Britain — all G7 members.

Trump is no fan of the world’s multilateral institutions, and that has set him on a collision course with his fellow G7 leaders, creating the so−called G6−plus−one dynamic. Trudeau and Macron expressed strong support for those institutions on Thursday.

They issued a joint declaration that affirmed the importance of the world’s multilateral institutions that included a commitment "to shared values like liberty, democracy, respect for human rights, and the rule of law."

They also renewed their commitment to the fight against climate change and to promote democratic values, free and open trade, and gender equality.

The American President may not mind being isolated, but neither do we mind signing a 6 country agreement if need be. Because these 6 countries represent values, they represent an economic market which has the weight of history behind it and which is now a true international force https://t.co/UA86fcjozs