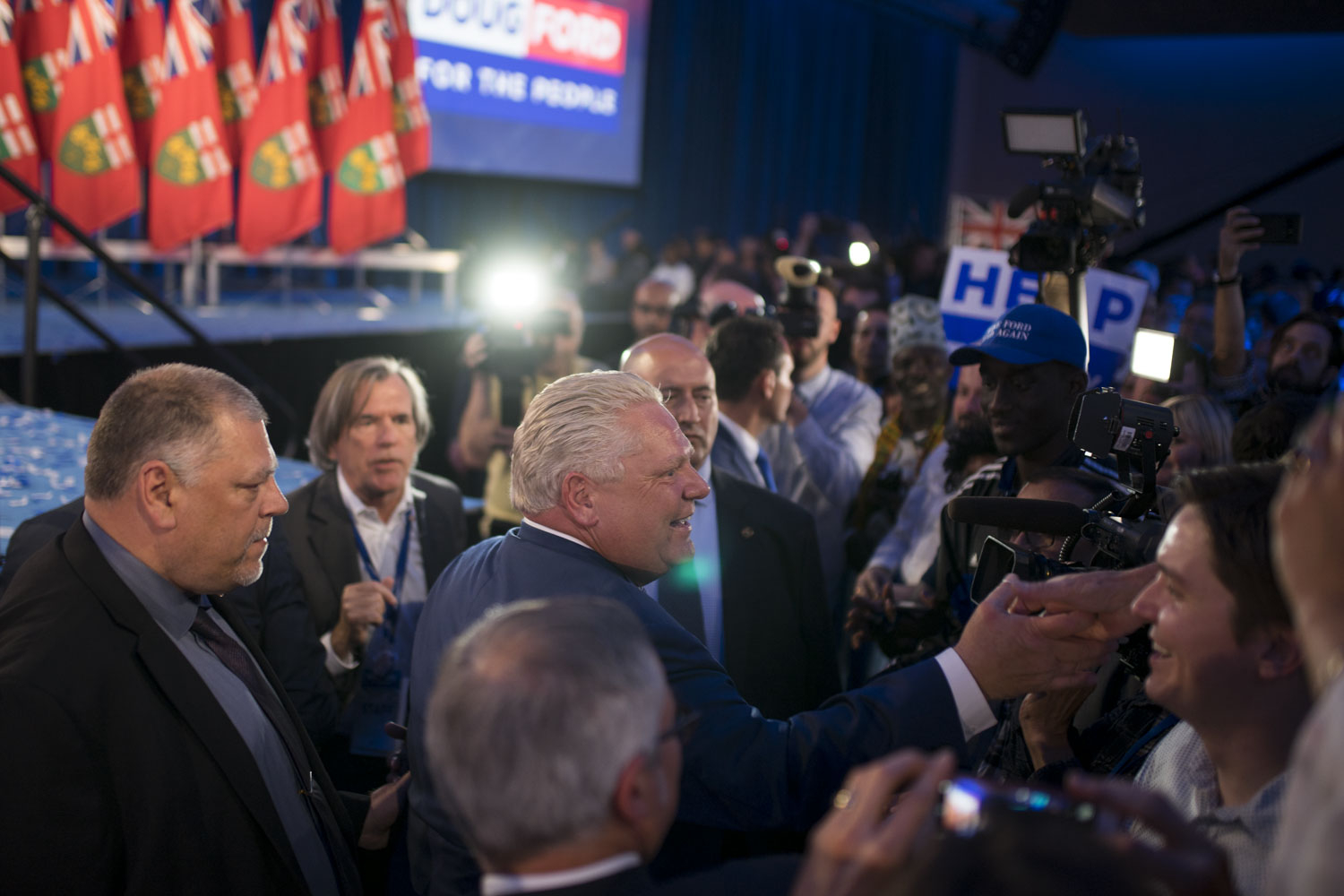 Progressive Conservative Leader Doug Ford greets supporters in Toronto on June 7, 2018 after learning he will be leading a majority government following the Ontario election. Photo by Nick Iwanyshyn
Previous story
Next story

Doug Ford said he will need some time to map out how he will deliver on campaign promises and said his first priority in government will be to assess Ontario’s fiscal health after his Progressive Conservatives won a majority government in Thursday’s election.

Ford’s campaign message had focused on returning money to taxpayers in the form of tax cuts and cheaper gasoline, taking advantage of a widely-held view that provincial Liberal governments of the past 15 years had been profligate in spending.

In his first comments to the media as premier-designate, a roughly 10-minute appearance which included an opening statement he read off a teleprompter, Ford said it would take three weeks for him to get settled in and turn to the task of governing Canada’s most populous province and economic driver.

He also said he intended to keep the promises he made during the campaign.

Asked how long he thinks it will take to fulfill a campaign trail pledge to extricate Ontario from its cap and trade system for controlling emissions and how much it will cost, Ford ducked the question.

“Over the next few days and couple of weeks - I figured the transition will take 21 days — and we’ll be able to answer that as we move forward,” he said. “We’ll be putting together a group of all-star cabinet ministers. And that’s going to be the toughest thing.”

A leading environmental lawyer has warned that withdrawing Ontario from the carbon cap and trade market it shares with Quebec and California would likely cost the province between $2 billion and $4 billion, not including the $2 billion in annual revenue the program generates.

Ontario Progressive Conservative Leader Doug Ford speaks to reporters in Toronto on June 8, 2018, one day after voters in the province elected his party to form a majority government. Facebook video by Alastair Sharp

Ford's rejection of carbon pricing could also have implications for the federal government as Prime Minister Justin Trudeau attempts to implement a nation-wide floor price on carbon pollution as part of Canada's efforts to address climate change and meet its international commitments under the Paris Agreement.

Conservative-leaning politicians in Saskatchewan and Alberta have also criticized Trudeau's policies, pledging to fight back.

Ford had also promised during the election and the preceding PC leadership race to mount a legal challenge to the imposition of Ottawa’s scheme, which puts a $10 a tonne price on pollution starting in 2018 that will rise by $10 a year until it reaches $50 in 2022.

“When you look at Justin Trudeau’s policies, which were very coercive to the provinces when it came to carbon pricing, that’s dead on arrival now,” Clement said. “You’ve already had resistance from provinces like Saskatchewan. If (United Conservative Party Leader) Jason Kenney wins in Alberta, forget about carbon pricing in Alberta. There might even have to be some litigation about this, but the fact of the matter is this is not a popular thing.”

Federal Liberals have said that carbon pricing is a key part of driving an economic policy that encourages clean jobs and cleaner forms of energy. But Clement said the election showed that many people didn't agree with that assessment.

“People feel gouged when it comes to gas prices. And let’s face it, for a lot of people who live outside of the core of Toronto, getting to work is one of their biggest expenses, and to tax that into oblivion was not the right policy for a huge swath of Ontario voters.”

Federal Conservative Leader Andrew Scheer has also declined to provide details of a climate change policy, but Clement said their alternative plan to address the issue would likely emerge after an upcoming party gathering a few months down the road.

“I think it’s a legitimate issue," Clement said. "Andrew Scheer, the leader of the federal Conservatives has said we’ve got to have a good policy that is distinctive from Justin Trudeau’s policy on climate pricing and climate change. So we’ve got a big policy conference coming up in Halifax in August and after that you’re going to see the planks of a platform, federally.”

'We keep our promises,' Ford says

Asked what his new Ontario government plans to tackle first, Ford said: “We have to look at the books, we have to see the financial situation that’s been left behind, and over the next couple days and weeks you’re going to hear from us, but the most important thing is getting our fiscal house in order.”

He said everything the government procures will be put out for competitive bids and that the new government is looking for an auditing company to conduct a line-by-line audit of the province’s budget. The outgoing Liberal government's last budget, tabled in March, projected a deficit of $6.7 billion for 2018-2019, anticipating that annual deficits would continue until 2024.

His transition team will be led by Ottawa public relations executive Chris Froggatt, while PC campaign chair Dean French will be his chief of staff. The transition team will also include long-time advisor Simone Daniels, former Humber River Hospital CEO Rueben Devlin and former federal and provincial cabinet minister John Baird. Froggatt previously served as a chief of staff to Baird while the Harper government was in power.

Ford said he would live up to another campaign promise, to repeal the province’s current sex education curriculum that is opposed by social conservatives, but did not say whether it could be done in time for the start of the next school year in September.

After running a tightly-controlled campaign that limited media access and prevented follow-up questions from reporters, Ford ended his news conference by saying that he would be sitting down for some one-on-one interviews, offering to give the media "all the access you need from Doug Ford."

The majority of voters in

The majority of voters in Ontario did not vote for Doug Ford, and that majority agrees that there should be a price on carbon. We have a system (cap and trade) that is working well right now; Ontario is reducing its greenhouse gases emissions and at the same time getting money ($1.9 billion) to invest in clean technology and reducing emissions in non-capped sectors (the actual system covers around 82% of Ontario's GHG emissions).
Contrary to Mr. Ford, the majority of people in Ontario (including many conservatives) care about the environment and believe that climate change is real. He should not forget that, because people will be there to remember him that he has to govern for the majority.
Tony Clement and company will meet a united front of Liberals, members of the NDP, the Green Party, numerous NGOs and environmental groups that will fight to help and convince the federal and provincial governments to keep or implement a price on carbon that will help Canada reach its emissions reductions targets. The future of this planet and its inhabitants doesn't depend on a few cents, more or less, on a litre of gasoline.