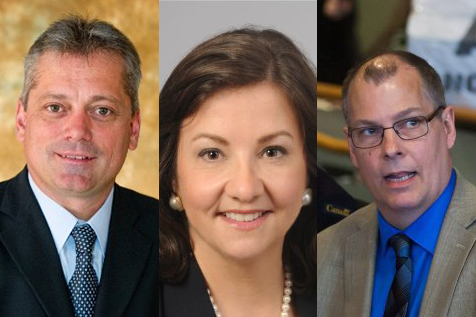 A montage of photos of senior officials at Canada's National Energy Board, including recently departed executives, Sylvain Bédard and Josée Touchette, as well as chief executive Peter Watson. Photos from LinkedIn, The Canadian Press and the NEB
Previous story
Next story

An executive responsible for "transparency" at Canada's pipeline regulator, the National Energy Board, has resigned following an unsuccessful hunt for a reporter's sources.

Sylvain Bédard was hired in the summer of 2016 as executive vice-president of transparency and strategic engagement at the regulator.

He went on leave in the fall of 2017 following a series of incidents at the regulator. Among them was his decision to approve a sole-source contract to a private investigator to identify which employees had spoken to National Observer about internal decisions and actions by management at the regulator.

The contract cost $24,150 but Presidia failed to identify any of the sources in its final report.

News of Bédard's departure was first reported by the Ottawa Citizen's David Pugliese on Tuesday and was confirmed on Wednesday by NEB spokeswoman Sarah Kiley.

"I can confirm that Mr. Bédard resigned from the NEB effective April 4, 2018," Kiley told National Observer in an email.

The regulator awarded the contract to investigate its own staff to Ottawa-based firm Presidia Security Consulting in 2016 after employees told National Observer that the regulator's top bureaucrat, then-chief operating officer Josée Touchette, had joked at a staff meeting about arming them with tasers to face off with environmentalists.

Several months after awarding the contract, Bédard, who was responsible for overseeing the NEB's responses to access to information requests, sent an apology to staff after learning that Presidia's final report on its investigation was about to be released to National Observer in response to a freedom of information request.

“Some of you might be wondering why we are sharing this report now. They say hindsight is 20-20 and looking back now, I wish I had shared the report earlier,” Bédard wrote in a message to NEB staff on May 30, 2017, also released through freedom of information legislation.

Bédard's apology appeared to contradict statements made in June 2017 by Touchette, who said the investigation was a "good idea."

Meantime, the NEB has maintained that it believes the investigation was "justified" as a response to the inappropriate sharing of internal information by staff.

"Mr. Bédard did not apologize for the exercise," Kiley told National Observer in a statement sent on Feb. 27, 2018.

Touchette has also recently left the regulator, accepting an executive job last fall at the Paris-based Organisation for Economic Co-operation and Development.

Touchette accepted this job after participating in a special network of international regulators, hosted by the OECD. The network received at least $200,000 in funding from the NEB, transferred through the federal Natural Resources Department, that was awarded based on advice provided by Touchette, National Observer reported last December.

She told National Observer last December that the decision to transfer funds was approved by NEB chief executive officer Peter Watson and explained that she took steps to avoid a conflict of interest prior to accepting her new job in Paris.

The NEB reimbursed Touchette for more than $38,484.95 in expenses when she moved from the Ottawa region to Calgary to accept her executive job at the regulator in 2015 and it reimbursed Bédard for at least $34,000 in expenses for a similar move in 2016, National Observer reported in April 2017.

Kiley, the NEB spokeswoman, said on Wednesday that Bédard's final moving expenses wound up costing $56,385.60. She also said he was not entitled to any severance pay when he left.

The NEB's budget is covered by taxpayers, but it recovers about 90 per cent of its spending through fees charged to the companies that it regulates.

Rise in complaints about secrecy

The regulator also saw a rise in complaints about its secrecy after Touchette and Bédard were hired. The institution had only one complaint in 2014-2015 about its responses to access to information requests, according to the most recent annual report from the office of the federal information commissioner, Caroline Maynard. Three years later, the total number of annual complaints against the NEB over its responses to access to information requests rose to 79 in 2017-2018, putting it among the 10 institutions with the highest number of complaints for the year, the commissioner's report said.

Canada's Access to Information Act is a transparency law that requires federal organizations to release public records within 30 days, upon request to any Canadian who pays a $5.00 fee, unless it has a valid reason to refuse.

National Observer has used the act extensively to formally request information and answers to questions that the NEB has previously declined to provide. National Observer has also submitted many of the 79 complaints recorded by the commissioner's office in the past year.

Firm announced it was buying Presidia one day before Bédard resigned

Presidia, the firm that was investigating staff to identify National Observer's sources, was recently sold to a larger defence industry and engineering consulting firm, AGDA Group Consultants Inc. AGDA announced the purchase on April 3, 2018, one day before Bédard's official resignation.

The recent departure of the two NEB executives, Bédard and Touchette, comes as the regulator faces major upheaval due to new legislation in Parliament, Bill C-69, that proposes to shut down the NEB and replace it with a new Canadian Energy Regulator.

The legislation, expected to be adopted later in 2018, could force existing members of the board, political appointments made by the former Harper government, to step down and be replaced.

Prime Minister Justin Trudeau's government has said that this legislation fulfills a Liberal campaign promise to restore credibility and public trust in federal oversight of industry.

National Observer was unable to reach Bédard for comment.

Editor's note: This article was updated at 6:50 p.m. ET on June 20, 2018 with additional information about the final total of Sylvain Bédard's moving expenses, reimbursed by the NEB.

Thanks to Mike de Souza and

Thanks to Mike de Souza and everyone at the National Observer, for doing the due diligencve we once expected from our mainstream media. After listening to Cindy Blackstock's moving convocation address at the University of Toronto.....and being reminded of what love and courage can accomplish....

It is a bit depressing to realize how toxic many public workplaces must be.....and how far those in control will go to keep them that way.

I think another donation may be in order.