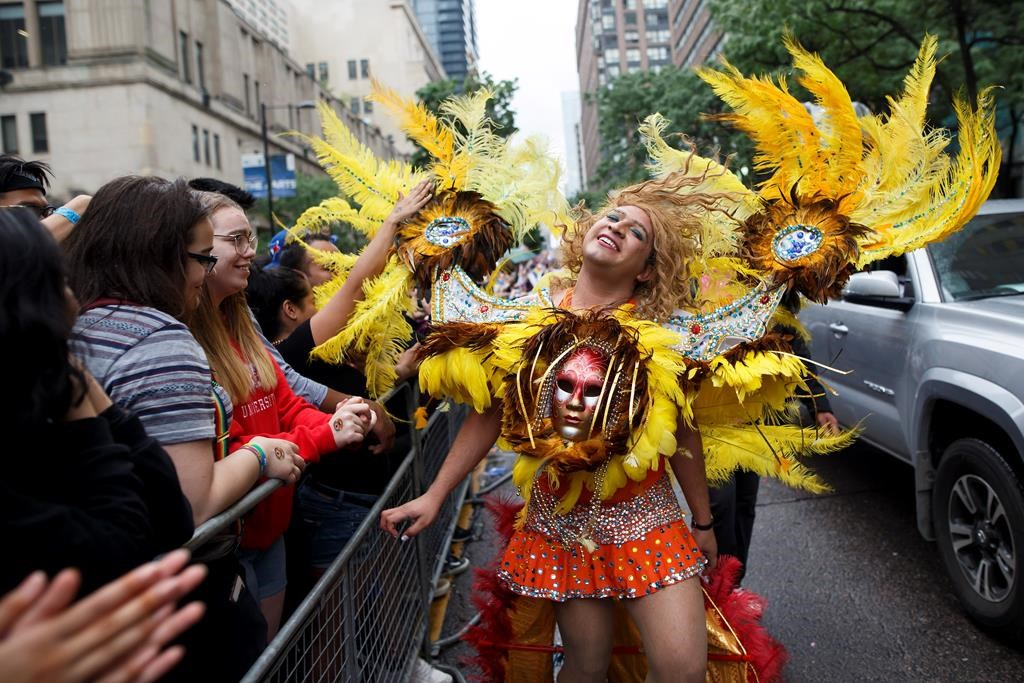 A reveller dances along the parade route during the Toronto Pride parade on Sunday, June 24, 2018 in Toronto. Photo by The Canadian Press/Cole Burston
Previous story
Next story

As Toronto's annual Pride parade wound through the city's core on Sunday, the streets might have been their usual sea of colour, but at moments, a heaviness hung in the air.

The subdued tone at the annual celebration put on by the city's LGBTQ community surfaced twice — first, as marchers paused for a moment of silence at 3 p.m. and later, at the culmination of the parade, when participants clad in black T-shirts that read "we will not rest until we're safe" took to the route.

The moments were Pride's way of paying tribute to men with ties to the city's gay village who were the alleged victims of 66-year-old Bruce McArthur. The self-employed landscaper was arrested and charged with eight-counts of first-degree murder earlier this year.

Members of the LGBTQ community have said the disappearances and deaths of the men were not seriously investigated by police, who parade organizers banned from marching in the event while in uniforms for the second year in a row.

Toronto's police force was first barred in 2016 after activist group Black Lives Matter temporarily halted the parade, demanding uniformed police, their floats and cruisers be excluded because of troubles between officers and the black community.

Such tensions didn't keep the smiles off the faces of about 120 groups who danced their way from the city's gay village to Yonge-Dundas Square in elaborate costumes while waving the signature rainbow Pride flags.

But everyone from dignitaries to organizers and spectators said the recent tensions weren't far from their minds.

"We are reminded today of a terrible tragedy that befelled this community and really the entire city and the whole country with the loss of the men. ... I view Pride as a much bigger healing process," Toronto Mayor John Tory said, noting that he recently initiated an independent review of the police's handling of missing persons cases.

"We still have a lot of work do to make sure these things don't happen."

Tory was not alone in calling for police, Pride and the LGBTQ community to find a mutually supported way for police to return to the annual event.

Politicians from several major parties and several spectators all noted that they would like to find a way to ease tensions that have cropped up in recent years.

Federal NDP Leader Jagmeet Singh, who danced beside Ontario NDP leader Andrea Howarth and a hoard of the party's supporters for much of the route, said that Pride will always be faced with discussions that are difficult because it is a "revolutionary movement to take space for a community that has always been marginalized."

"The only way we can have good policing is when there's a trust between the police and the public and that is something we need to have," he said. "Love is love, it truly is, but there is so much more that needs to be done."

In addition to police, Singh also said someone else should have been at Pride — Conservative premier-designate Doug Ford.

In the lead up to the parade, Ford was non-committal about whether he would attend, even saying he would consider marching if uniformed police were invited back. His late brother, former mayor Rob Ford, also often skipped the event to head to the family's cottage.

Singh said it was not surprising Doug Ford decided not to appear.

Meanwhile, outgoing and openly gay Premier Kathleen Wynne, had a message for Ford.

"Canada and Ontario are a beacon for inclusion and it is very important for us to understand that as elected people," she said. "It is our job to contribute to that and bring people together."

Ford's absence annoyed 29-year-old nursing student Mike Morris, who came to the parade bare-chested and in a rainbow Speedo, but he said he wasn't going to let Ford's non-attendance get him down.

Instead, he shimmied and yelled the words to popstar Lady Gaga's "Born This Way" with a group of friends in bedazzled cowboy hats and helped a friend paint her face into a rainbow.

He only paused his enthusiasm when the 3 p.m. moment of silence began and he wrapped his arms around his pal, both bowing their heads in sadness.

"The LGBTQ community needs celebrations like this and ways to come together when we face difficult situations, which is exactly what we've been facing," he said. "This is our time to show how strong we are and that we are there for each other."

Then, with a nod to the recent tensions and the drizzling rain that had fallen on the event repeatedly, he added, "We won't let it rain on our parade or our community."