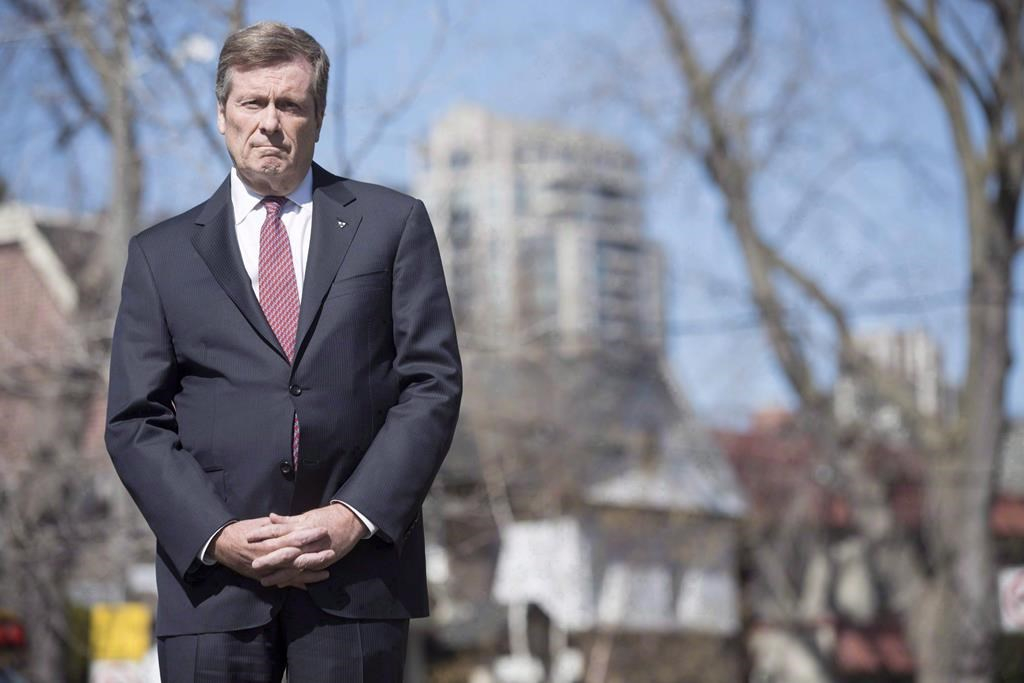 Mayor John Tory stands in front of the media in Toronto on Tuesday, April 18, 2017. File photo by The Canadian Press/Chris Young
Previous story
Next story

Toronto can no longer accommodate new waves of refugees and asylum seekers in its shelter system and needs federal and provincial help dealing with the situation, the city's mayor said Tuesday as he called for immediate support.

John Tory asked for financial and housing assistance, saying he detailed his requests in an "urgent" letter sent to Ottawa this week.

"We've been seeing an increasing number of refugees and asylum seekers looking for somewhere to live temporarily within our shelter system while they get settled," he said. "And the city has gone to what I would very genuinely describe as heroic efforts to help."

But Toronto has reached its limits, Tory said.

"We need help," he said. "We just don't have the resources to do it alone."

Some of those people are being housed in hotels, but that program intended to expand the shelter system is now also at capacity.

Some 600 people are also currently being housed in college dormitories as an expansion of the system — with another 200 expected to join them — but they will be forced out on Aug. 8 as schools prepare for students to return.

Without increased support, Tory said, there will be nowhere for those refugees and asylum seekers to go.

He said he hoped his federal and provincial counterparts will help find other places refugees and claimants can temporarily stay while looking for a more permanent home. He noted that the southwestern Ontario town of Leamington, for instance, had said it was open to welcoming newcomers.

Tory added that neither provincial nor federal governments have provided the city with direct funding to assist with the cost of housing asylum seekers and refugees, though Toronto is expected to receive recently announced federal funding for the matter.

"Whatever timetable they're on now, we need the governments to speed up notifying us of tangible, actual steps they're going to take to be in partnership to look after these people," the mayor said.

In a written response to Tory's letter, Minister of Immigration, Refugees and Citizenship Ahmed Hussen reiterated the federal commitment to providing $50 million across Canada towards temporary housing for asylum seekers — $11 million of which is earmarked for Ontario.

"This funding represents an initial response to the financial pressures outlined, and further funding towards Toronto's request will be discussed as part of ongoing discussions," he wrote in the letter obtained by The Canadian Press.

Hussen added that federal officials had been in communication with provincial counterparts to prepare to establish a "triage centre to manage flow" of irregular migrants and alleviate housing pressures in major cities, particularly Toronto.

The federal minister did not provide a specific timeline for that system, but said that if it comes into place it should also help with the existing strain on the shelter system.

"With a triage system in place, a joint approach to address the pending loss of college residence spaces could be established well in advance of the early August deadline," he wrote. "I will ask my officials to reach out to yours and their counterparts in Ontario on a trilateral basis in order to have a better sense of Toronto's needs and pressures."

A spokesman for premier-designate Doug Ford said the matter was a "pressing issue" for Toronto and Ontario.

One observer said temporary shelter for refugees and asylum seekers is only part of a long-term solution.

"It's a stopgap," said Penny Gurstein, the director of the University of British Columbia's School of Community and Regional Planning and Centre for Human Settlements.

The root of the issue, she suggested, is a lack of affordable housing in areas that also offer employment and language services for new immigrants. There should be a continuum of supports that include — but are not primarily composed of — temporary shelter, she said.

"You need housing to move forward in your life. You need stable, secure, affordable housing," Gurstein said. "If we can't provide it in these cities, that's a big issue."