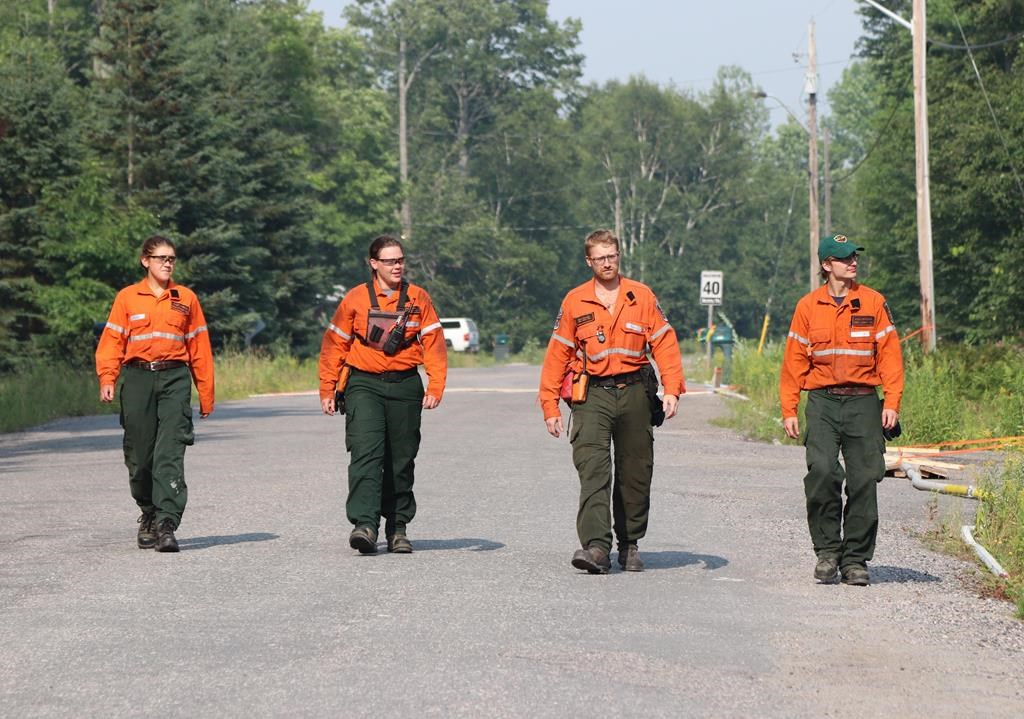 Ontario FireRangers are shown in an area near the fire known as "Parry Sound 33," on Sunday, July 29, 2018 in a handout photo. Handout photo by The Ontario Ministry of Natural Resources/Christine Rosche
Previous story
Next story

Crews battling massive fires in northwestern Ontario have been diverted to the heart of the province's cottage country, where a smaller blaze that started more than a week ago is inching closer to a stretch of the Trans-Canada Highway, provincial officials said Monday.

The fire, known as Parry Sound 33, was just six kilometres away from a portion of Highway 69 on Monday — a kilometre closer than it was a day before, a spokesman for the Ministry of Natural Resources said.

Officials have said it was started on July 18 and the cause is under investigation.

The 89-square-kilometre wildfire in northeastern Ontario has drawn crews away from a blaze three times its size along the province's northwest border, more than a thousand kilometres away, said spokesman Chris Marchand.

"In the northeast, those fires are happening right in the middle of cottage country," said Chris Marchand. "There are a lot of values, a lot of lives right in the midst of a force of nature ... as opposed to up here (in northwestern Ontario), where a good 50 to 70 per cent of the fires we see, we can just allow them to burn freely on the landscape."

As it crept closer to the Trans-Canada Highway on Sunday, spokesman Shayne McCool said the flames of Parry Sound 33 also crossed a stretch of CN Rail tracks.

"That section of the fire is a top priority," he said, though he noted that the blaze's location near the Georgian Bay means it's bolstered by lake effect winds that make it harder to fight.

Crews from the United States and Mexico have joined firefighters from throughout Ontario and the rest of Canada to tackle the flames. McCool said this has been a landmark year for forest fires in Ontario, mostly due to lots of lightning and precious little rain.

"When that occurs and forest fields are as dry as they are, when lightning strikes it ignites a lot easier than maybe it would when fields are more wet or damp," he said.

One was burning four kilometres northwest of the community of North Spirit Lake, while another was located approximately nine kilometres south of Wabigoon Lake Ojibway Nation.

There have been 888 wildfires this year so far, compared to an annual average of 517 over the past 10 years.

The ministry said there were 39 active fires in northeastern Ontario on Monday afternoon and more than 100 in the northwest region. Of those, 44 fires were still raging out of control.

A firefighter from Alberta died on Thursday while fighting a fire near the town of Red Lake, Ont., about 100 kilometres east of the Manitoba boundary. He was identified as Jerry Gadwa, a resident of Kehewin Cree Nation.

Can't find a map of the

Can't find a map of the affected areas anywhere. I could make one. Doesn't the Ontario govt have one?

Nary a word about climate

Nary a word about climate change being a major factor in the “forest fields are as dry as they are”. and the “precious little rain”?

Hmmm why are we still censoring ourselves about rising global climate temperature that is known to be a major contributor to the increasing frequency and severity of extreme weather events. Are we really so afraid of the Fossil Fuel Industry and its captured state? Seems so. And they are powerful, no doubt ..... AND they are destroying our chances of reaching our Paris Goals, thus leaving a terrible legacy for future generations.