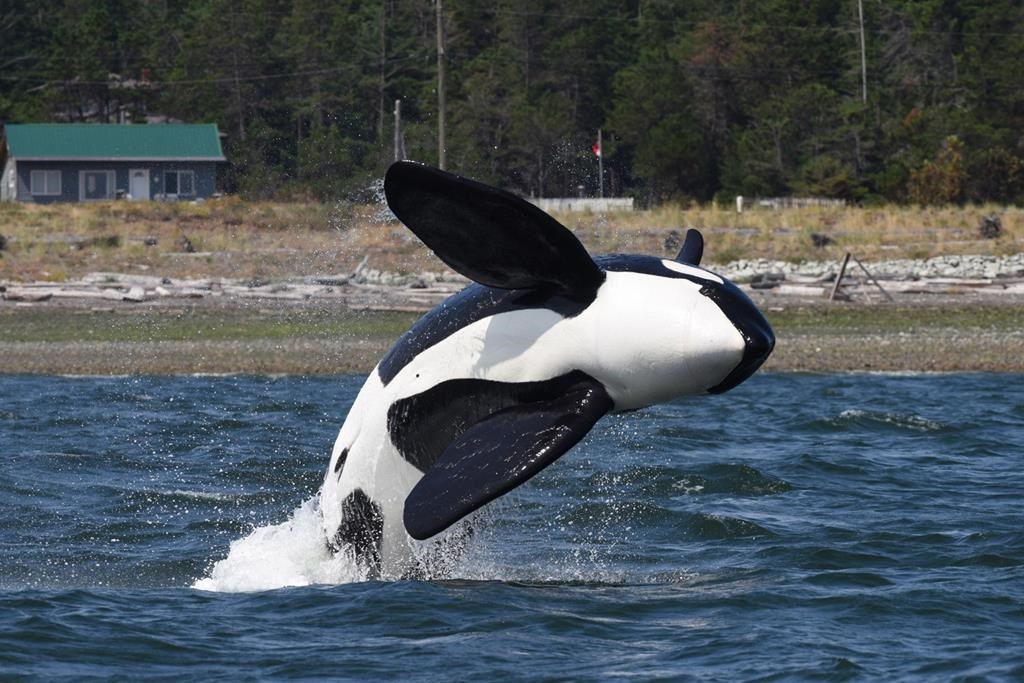 Scientists have coaxed a large male killer whale, shown in this handout image, out of a British Columbia harbour by playing recorded sounds of other orcas to the animal. Handout photo by The Fisheries and Oceans Canada
Previous story
Next story

Scientists in British Columbia used whale whisperer tactics Thursday to coax a large male killer whale out of a busy marine harbour by playing recorded sounds of other orcas to the animal.

Department of Fisheries and Oceans officials said the transient killer whale known as T73B immediately responded to the recorded underwater calls of whales likely familiar to him and left the harbour and was last seen heading for open ocean.

"He was visibly excited by those sounds," said DFO whale scientist Jared Towers from Comox, B.C.

"That's what basically got him out of there. He made a run to the north and we never saw him again."

He said scientists used recordings made two years ago of other orcas who have been seen with the lone male in the past.

"We thought he seems to be good buddies with those guys and we used that recording and it seemed to work," Towers said.

He said using playback recordings to entice an orca from an area has only been done once before in B.C., but that was with a young whale.

"It's totally unprecedented to have done this with an adult killer whale here in B.C.," he said.

DFO spokesman Paul Cottrell said officials decided something had to be done to get the whale to leave Comox Harbour for its safety and protection of the public.

"In the last couple of days we realized we've got this animal hanging around and it's an atypical behaviour, and we have to look at options given the number of people in the estuary," he said.

The Comox Harbour includes commercial fishing vessel traffic and recreational boats, including kayaks and paddle boards. There are also swimmers.

Cottrell said the longer the whale stayed in the harbour the greater the chance of the animal becoming habituated and the likelihood of an incident involving people.

"Basically, we were able to stickhandle the whale out of the estuary and over a very shallow area off Cape Lazo and into deep water."

Cottrell said officials will remain in the area to observe if the orca returns.

The male orca had become a major attraction in Comox, entertaining a growing crowd of onlookers.

Comox Valley Harbour Authority spokesman Robert Clarke said hundreds of people stood on the community promenade along the shoreline and watched the orca breach and swim around the harbour.

Clarke, a former whale-watching guide, said killer whales have appeared in the harbour, but rarely stay for long.

He said there had been reports of the whale swimming up the Courtenay River, part of which flows through the Vancouver Island community and the same animal was also seen at Union Bay, about 20 kilometres south.