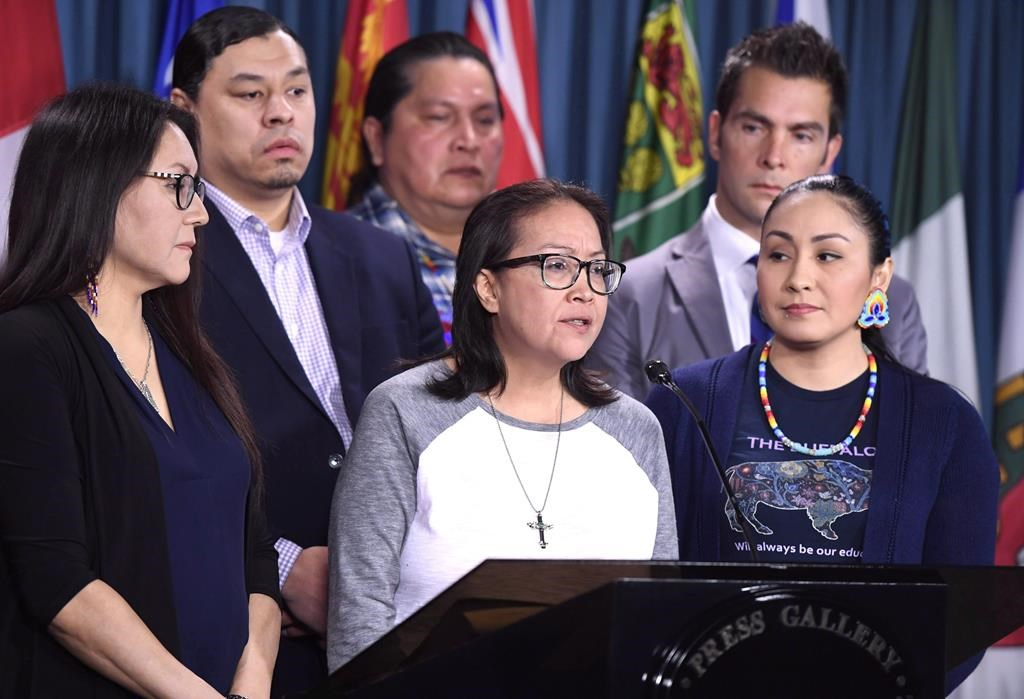 Debbie Baptiste, mother of Colten Boushie, speaks during a press conference on Parliament Hill in Ottawa on February 14, 2018. File photo by The Canadian Press/Justin Tang
Previous story
Next story

The family of an Indigenous man shot to death on a Saskatchewan farm has filed lawsuits against the RCMP and the farmer who was acquitted in the killing.

Colten Boushie was killed after being shot in the head on a farm near the community of Biggar in August 2016.

Gerald Stanley, the landowner, was found not guilty of second-degree murder after testifying that his gun went off accidentally as he was shooting to scare away young people he thought were stealing from him.

The claim against Stanley, filed in Saskatoon court, argues that the farmer caused Boushie's death through negligence, recklessness, or by an intentional act.

"This lawsuit will prove that the death of Colten Boushie was wrongful and that the Boushie family suffered a profound and devastating loss the night Colten was fatally shot," lawyer Eleanore Sunchild said in a statement Thursday.

"This lawsuit will hold the person responsible for Colten’s wrongful death accountable. Nothing can return Colten to his family, yet the Boushie family will continue its relentless pursuit of justice for Colten."

None of the allegations have been proven in court. Stanley's lawyer did not immediately return requests for comment.

The suit argues that Stanley or his family members never attempted to contact police when they saw the young people on the property. It also says that Stanley's wife, Leesa, is a registered nurse and didn't take any action to provide life saving measures.

Boushie's family is also suing the attorney general of Canada and individual RCMP officers over the way they were treated on the night Boushie died.

The claim says that officers didn't present a search warrant when they arrived at the family's home at Red Pheasant First Nation when they were looking for Cassidy Cross-Whitstone, who was in the vehicle with Boushie at Stanley's farm.

The family says no consent was sought to enter the home and that one officer grabbed Baptiste by her wrist and told her get herself together as she was on the ground, inconsolable.

"The search officers who attended the home deliberately engaged in discrimination by subjecting three proud members of the Red Pheasant First Nation to ridicule, unlawful searches, and humiliating breath tests," the claim says.

Chris Murphy, another lawyer working with the Boushies, said in a statement that he expects the lawsuit will make the force "look deep within itself and examine the manner in which the RCMP interacts with the Indigenous citizens of Canada."

The RCMP said in a statement that its sympathies remain with the family and friends of Boushie. The Mounties said that they are fully co-operating with an independent review of what took place.

"As this matter is currently under independent review and is now before a civil court, it would be inappropriate to comment publicly at this time," the RCMP said.

I am reminded of the civil

I am reminded of the civil lawsuit filed by the white families of the victims of that infamous football "hero". They won significant damages.
This is the "coloured family's" version of a similar civil lawsuit against an equally infamous stand- your-ground (which has no validity in Canada) type of overreaction outrage. It remains to be seen if the Canadian civil justice system will be as willing to punish the white perpetrator as the American civil courts were willing to hold the aquitted black hero responsible.

It should be a no-brainer, the Canadian white killer willingly admitted his actions, wrapping them in the cloak of "Indian panic".

It is sickening to uncover the fact that Canadian white society/institutions are as lethally guilty of injustice as American white society/institutions have been, and continue to be.
Although I am a citizen of both the US and Canada - I CHOSE Canada partly because I could no longer stomach the culture of bigotry and hypocrisy in the land of my birth. It appears there is no escaping the deadly white hand. It has to be confronted and neutered before it spreads any further. White supremacy is demographically doomed and the dreadful example of its "supremacy" is out there for anyone to emulate. Ironic, no?