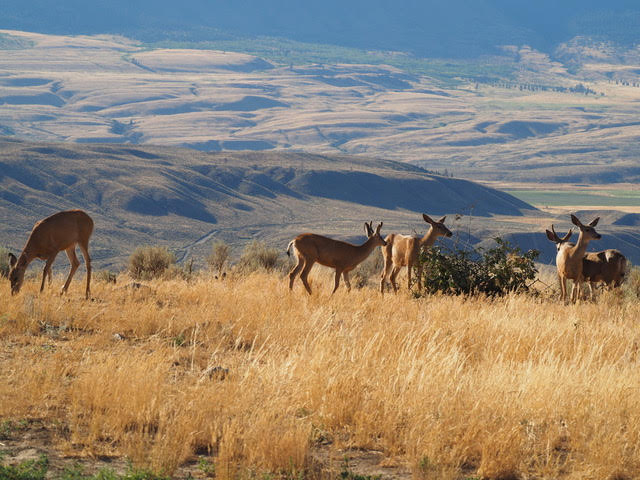 I live in remote ranch land in the rain shadow area of British Columbia in the Thompson River Valley. It is high desert surrounded by cattle ranches, grazing leases and ‘Indian Reserves’ (reservations). Five years ago, a friend of my wife’s visited with his wife and son and a massive bear-hunting dog. They slept in their specially outfitted hunting trailer. That night, we could hear considerable carousing on the island, part of the local Reserve across the dry channel from us. Next morning, when our guests joined us at the cabin for breakfast, we were startled to learn that their door had been kicked in during the night. Not knowing what to think but suspecting it might be some kind of prank, the hunter luckily managed to grab his dog and restrain him as he lunged for the intruder(s) who disappeared into the night.

I was shaken. Nothing like this had ever happened before. Was our life about to change? After calling the RCMP to record the event, I sat down and considered what to do about that middle of the night home invasion. I decided to write a letter and hand deliver it to all three houses on the small reserve closest to us. The first two households claimed no knowledge of the incident and said they had not been at the party on the island. I was invited into the third and when I handed over my letter at the kitchen table, my host, a handsome and thoughtful fortyish man, blanched and in a shaking voice said: “Those were our kids on the island.” Then he raised his voice and demanded his sons come downstairs. Only one did. His father asked whether he had been involved in the break-in. He protested that by then, he was “passed out.” His father, now livid, ordered him upstairs.

In a trembling voice, his father turned to me and said: “Ehor, I promise you it won’t happen again.”

We shook hands and I handed him an invitation to a family celebration that weekend for several birthdays and anniversaries that brought people from as far away as Vancouver, London and Los Angeles. To our delighted surprise, he and his wife showed up bringing gifts of smoked salmon and with overwhelming generosity even bestowed jewelry on the women in our family. They joined us in our festivities as we danced until two in the morning. And over the last four years, the island has been merely a scene of peaceful family camping. Last year, when unspeakable tragedy, the death of his beautiful wife, shattered the family, we visited bringing food and condolences.

I shudder to think how it might have ended very differently. If our friend had released his bear-hunting dog, the intruders would have become victims, torn apart by a racist white rancher who released his vicious killer dog on aboriginal youth. Or if I had merely insisted the RCMP do their job and they ended up arresting the sons of our neighbours, old interracial hostilities might have been rekindled and since then we would listen with trepidation to any strange sounds in the night. And of course everyone is armed. We have had our turkeys and dogs attacked by cougars, bobcats and coyotes and so a rifle is always readily available, though locked in a gunsafe.

I don’t know what really happened at Gerald Stanley’s farm near the Red Pheasant Cree Nation Reserve in Saskatchewan that fateful day in 2016. But media reports describe four inebriated aboriginal youths arriving in an SUV with a flattened tire, carrying a loaded rifle in their vehicle and appearing to try to abscond with a car parked on the property after attempting a similar action at a farm down the road. Mr. Stanley got out a registered handgun and in the course of the altercation, fatally shot Colten Boushie.

A tragedy of such magnitude transpiring on a South African farm might be considered commonplace, but for it to occur on a Canadian farm is not only chilling but cause for some deep soul searching.

The only similar incident with which I am familiar occurred when a young woman, a passenger in a a car full of teenagers, was killed by a caroming rifle bullet as the car sped through the yard of the Trickle Creek commune headed by Pastor Wiebo Ludwig, terrorizing the residents of the farm. Ludwig was widely despised by many in the the local oil patch community for objecting to sour gas wells near his land that he claimed were poisoning his flock, largely his extended family. Some wells had been sabotaged, bombed. Eventually, he did jail time for the sabotage, but no one ever found out who fired the fatal shot that night.

It is clear that the common element in all those events is fear, a perception of immediate threat from the intruders that places its own meaning on the events. On my ranch, the break-in was unexpected and unprecedented. That allowed it to be interpreted as a prank. Apparently, Saskatchewan has been afflicted with robberies in remote locations. Even though overall property crimes are down in that province, that trend did a great deal to define the situation for the Stanley family.

I cannot countenance how the incident ended with Colten Boushie’s death but the problem does not lie with the criminal justice system, which once invoked operates more like a sledge hammer than a laser, in its efforts to discover the actual events that transpired that day. Its origins were intended to replace the system of vendetta, blood feud, with all the attendant violence, that characterize it, not to customize the law for each individual case. The solution lies in examining and remedying why so many robberies are occurring in Saskatchewan and to re-establish a meaningful dialogue and relationship between those sectors of society caught up in the perceived conflict. And that solution the criminal justice system is not designed to accomplish. But society should be.

Although a conviction did not occur, perhaps a reconciliation circle rather than a sentencing circle would be a first step.

A good common sense approach that would serve well in other communities. Sit down and talk with your neighbors.

"A tragedy of such magnitude

"A tragedy of such magnitude transpiring on a South African farm might be considered commonplace, but for it to occur on a Canadian farm is not only chilling but cause for some deep soul searching."

I appreciate the story, but I guess I don't know the writer's Canada. I've lived and travelled widely, in cities and small towns, working industrial and small jobs before getting an education and career in science. I've ALWAYS seen and heard and felt a tension between First Nations and settlers. My parents immigrated here in the 50s and I always felt out of place in Anglo-Canada so it's not like I was blindly on one side.