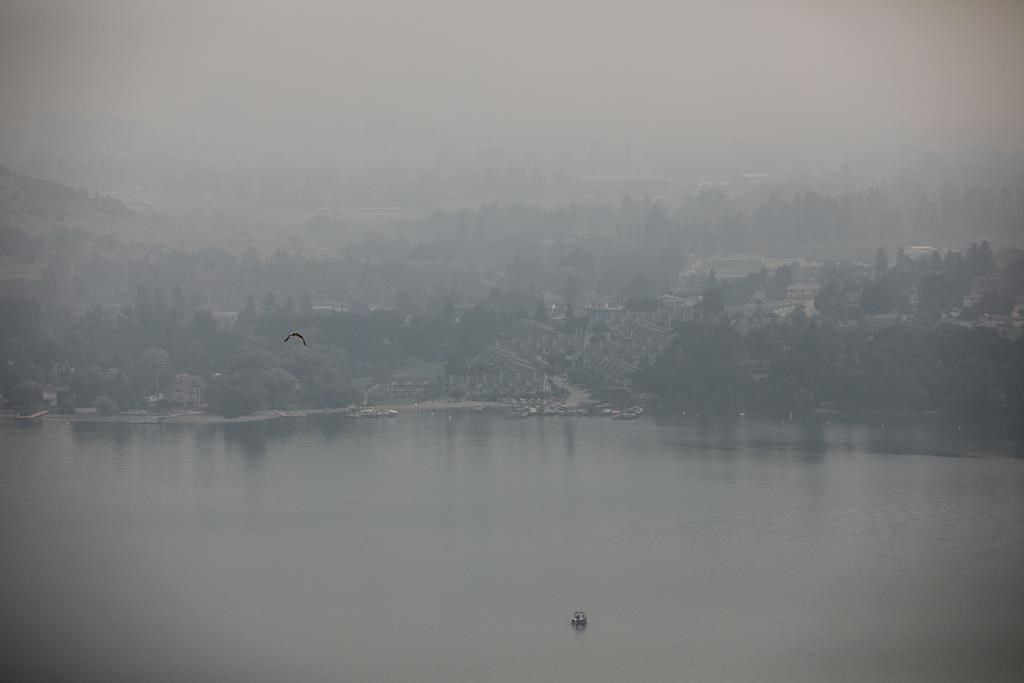 Thick smoke from the B.C. wildfires is seen over Kalamalka Lake in Vernon B.C. on Monday, August 20, 2018. Photo by The Canadian Press/Jeff Bassett
Previous story

Winemakers can only hope the scent of smoke that's in the air across British Columbia from wildfires won't swirl in the glass once this year's vintages have been bottled.

Smoke-shrouded grapes can give an ashy, bitter flavour to wine and tests have been developed to help growers assess the quality of their grapes, said researcher Matt Noestheden, a PhD student at the University of British Columbia Okanagan in Kelowna.

"For this season, time will tell. If I could (predict the quality) I would be a rich man," he said in a telephone interview.

Red wine grapes, such as the Pinot Noir variety that is planted widely in the Okanagan, change colour from green to red in a process known as veraison. That process is underway now in the region, Noestheden said, adding that wineries dodged any danger last year because smoke from wildfires happened early in the growing season and not as the grapes were changing colour.

"That two- to three-week period from full veraison until a couple of weeks after that is where the grapes seem to be the most susceptible to the problem," he added.

The B.C. government's air quality health index, which includes a measurement of particulate matter, listed the Okanagan as moderate on Tuesday but the rating was expected to climb to high by Wednesday. Bulletins warning of smoky skies from Environment Canada said communities in the Interior of B.C. would likely see further deterioration in air quality through the week as westerly winds are forecast to blow wildfire smoke into the region.

Noestheden is working with Okanagan-based Supra Research and Development to identify chemical markers for smoke taint and he said wineries from B.C. to California are waiting for the outcome. He doubted Ontario wineries would be affected by wildfire smoke in that province.

"They don't get the quantity of smoke that we do," he said.

The tests developed with Supra research are being applied in field trials and the findings could offer solutions for grape growers in regions where wildfire smoke lingers.

"Now we feel that we can understand the chemistry enough that we can start to think about ways to insulate the grapes in the field," said Noestheden.

"We are also looking at ways that winemakers can augment their fermentation to mitigate the impact that the smoke might have on the final taste and aroma of that particular wine."

The best solution this year for anxious winemakers is to make and sip a small batch of wine immediately after the grapes are harvested, he said.

"We are trying to push that timeline further back so winemakers can plan their fermentations accordingly, but right now the best advice is to make the wine and taste it."