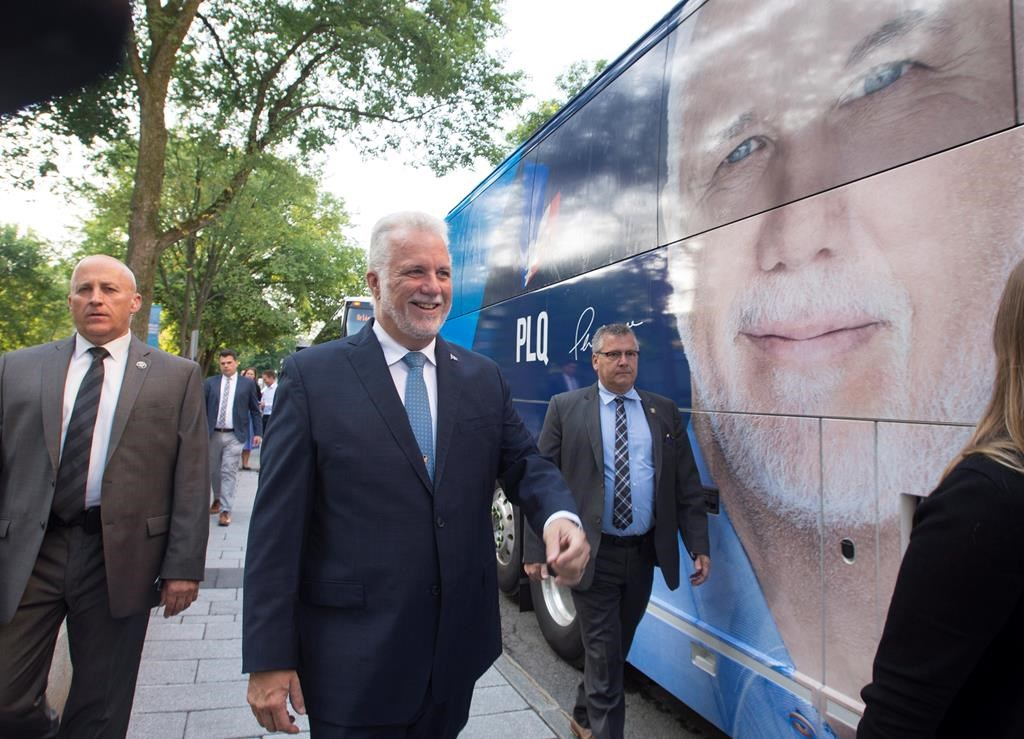 Quebec Liberal Leader Philippe Couillard smiles as he walks to visit his campaign bus on Thursday, August 23, 2018 as he launches the provincial election in Quebec City. Photo by The Canadian Press/Jacques Boissinot
Previous story
Next story

Couillard also wasted little time making it clear what a prominent plank in his strategy will be during the 39-day campaign: attacking the front-running Coalition Avenir Quebec.

He accused Francois Legault's party of plunging Quebec back into confrontation with its views on Indigenous Peoples, medical specialists and civil servants.

"I don't call that stability, and that is what I see in that party," said Couillard, adding he is proud of his government's accomplishments since its election in 2014.

Couillard will also vaunt Quebec's financial situation against the backdrop of a strong economy, low unemployment and rising salaries

The timing of the election call was not a surprise as Couillard had said earlier this month the campaign would officially begin Thursday, with Quebecers going to the polls Oct. 1.

With the exception of the recent PQ minority government, the Liberals have been in power since 2003, but recent polls have suggested the Coalition is ahead in popular support.

PQ Leader Jean-Francois Lisee held his own news conference Thursday and accused the Liberals of failing to do enough for various segments of the population, including children and the elderly.

"The Liberals act as though there have been co cuts. Nobody believes them. The Caquistes (the Coalition) act as though they can cut taxes without cutting services. Nobody should believe them. If you hated Liberal austerity, you are going to hate Caquiste austerity."

The 39-day campaign is the longest possible under Quebec electoral law and Liberal strategists have said privately it means more time to put the Coalition under the microscope.

Couillard has said the extra days were necessary because of the Labour Day weekend and the time needed to prepare for three debates.

"We'll have more time to speak to Quebecers," he reiterated Thursday.

At dissolution, the Liberals held 68 seats, the PQ 28 and the Coalition 21.

There were also three Quebec solidaire members and five Independents in the 125-seat national assembly.