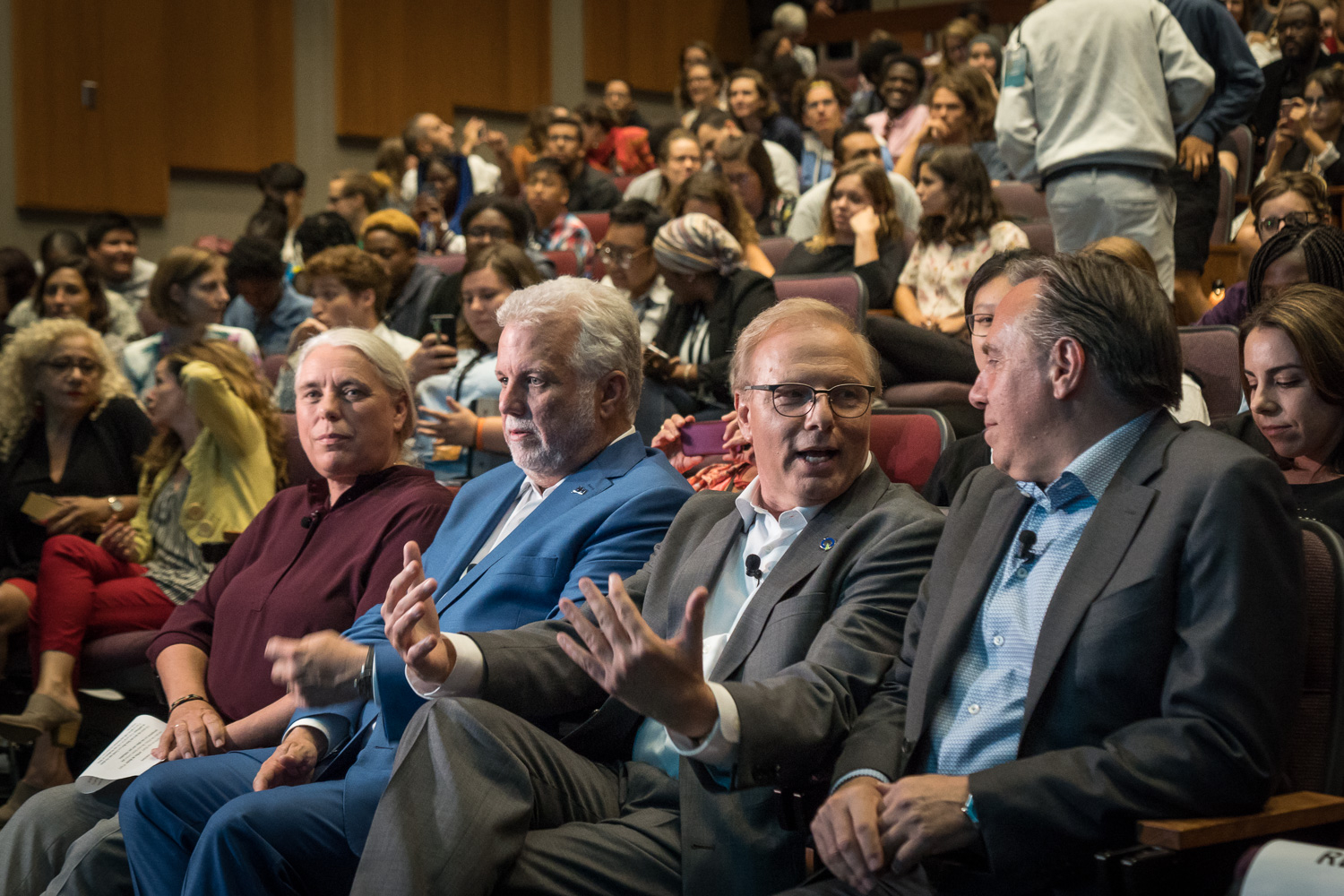 Mannon Massé, Philippe Couillard, Jean-François Lisée and François Legault sit in the audience before taking the stage for a political discussion at Concordia University on Aug. 17, 2018. Photo by Josie Desmarais
Previous story
Next story

As he stepped onto the stage with his political rivals last Friday, it was obvious that a young crowd in downtown Montreal wanted to give a special welcome to Quebec Premier Philippe Couillard.

The Liberal leader, elected to form a majority government in 2014, was the only one out of four to be greeted with boos and jeers.

Legault is the leader of the populist Coalition Avenir Québec party, which currently holds 21 seats in Quebec’s National Assembly and is considered to be the front-runner in the race to win the Oct. 1 provincial election, according to a Léger poll for daily newspaper Le Journal de Montréal and the LCN television news network that was released last Saturday.

On Friday, representatives from the four parties were gathered at Concordia University for a special discussion organized by non-profit l’Institut du Nouveau Monde. It brought together several hundred young Quebecers between the ages of 18 and 35, who now make up one of the largest voting blocks in the province. They wanted answers from politicians about the issues that keep them up at night.

Although Couillard may be going into the campaign in second place, it was also clear at the pre-election dress rehearsal that Legault has a target on his back.

The CAQ leader got his own share of boos and whistles when he said that he would require new immigrants to Quebec to pass a French test after three years to avoid placing themselves “in an illegal situation.” The CAQ has also said that it will cut Quebec’s immigration quota by 20 per cent if elected.

Legault’s political opponents were quick to lambast his intention. Couillard pointed out that over 50 per cent of new jobs in the province between 2006 and 2016 were filled by new arrivals. He also championed his belief that immigrants should learn French alongside Quebecers à l’usine “in the factory,” not from a distance in a class. Parti Quebécois Leader Jean-Francois Lisée said to reporters afterwards Legault's pledge was “one of the most unacceptable propositions ever made in recent times in Quebec."

Salée believes Quebecers can expect more vigorous debate over issues of identity and immigration in the 39-day campaign. Although the issue of Quebec sovereignty is off the table for the first time in 40 years, “the national question will still be popping its head up, but in a different way – not around sovereignty but around immigration. Mr. Legault will probably be pushed in a corner by the others to explain his policies [...] the strategy of the Liberal party in particular will be to make him look bad – not necessarily as a racist, but as a chauvinist nationalist."

The PQ have said they will not call a referendum on Quebec independence until winning a second mandate in 2022. Party leader Lisée has styled himself as the "underdog" of the campaign — and for good reason. With many PQ seats predicted to swing to the CAQ, his party risks losing official party status.

Salée compares the mood in Quebec to the political landscape in Ontario last June and the United States in November 2016, when leaders with populist messages surged to power.

“A neo-liberal party has been in power for a number of years. It’s seen as too liberal, or not in favour of the people, and it opens the door for populist discourse. Mr. Legault’s discourse, or position, is very much in line with this type of populist emergence.”

But, Salée adds, “populism can go both ways” — and the left-leaning Québec solidaire also stands to benefit. “The QS could score a few points if they show that austerity measures have been problematic in terms of organization of labour and working conditions. Maybe the economy is going better... but at what cost?”

The Quebec Liberals have been in power for almost 15 years, forming majority and minority governments in every election since 2003, except for 2012, when former premier Pauline Marois formed a minority Parti Québécois government that lasted until Couillard's Liberals were elected with a majority in 2014.

Andrés Fontecilla, QS candidate for the inner-city riding of Laurier-Dorion and former party spokesperson, told National Observer on Tuesday that the big issue of the election is “to change the direction" Quebec is heading after years of Liberal rule.

"We need a government that serves the interests of the whole population, not just the rich and powerful as is the case at the moment with the Liberals, who are the party of bosses.”

“Quebec needs an economy that provides jobs all the while being sustainable and ecologically viable,” he added.

In a recent interview with TVA Nouvelles QS spokesperson Massé said her party is planning the “most ambitious” energy transition strategy Quebec has ever seen – and during Friday’s event, she decried the fact that “we are in the process of destroying the planet.” 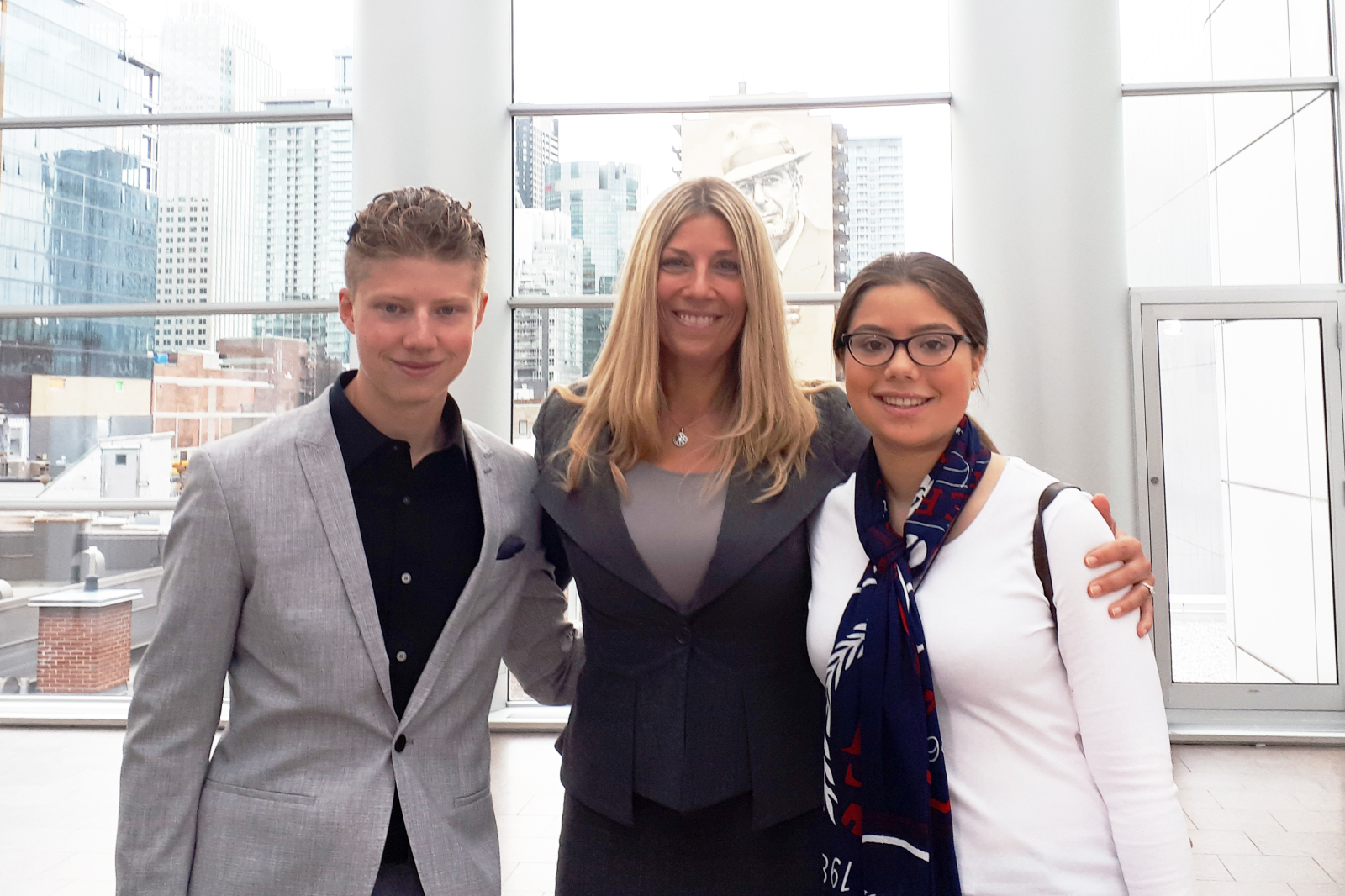 Jennifer Maccarone poses with her children Sam and Bianca at her nomination as Liberal candidate for Westmount-Saint Louis on August 22. Photo by Cecilia Keating

Meanwhile, Legault has styled himself as an “economic premier” who will boost the province’s economy by streamlining government, reducing waste in Crown corporations, luring better quality jobs into the province and aggressively exporting Quebec’s surplus hydro to other jurisdictions, in particular the United States. He recently pledged to cancel a wind energy project on the north shore the St. Lawrence Seaway because it was uneconomic.

A pre-election report released by the province’s auditor general on Monday deemed the Liberal government’s forecast of annual surpluses for the province until 2021 “plausible.” It’s a positive sign for the Liberals, who will be putting the positive state of the economy front and centre of their bid for re-election.

While the Léger poll demonstrated that the CAQ are election frontrunners with 36 per cent of poll participants' support, it also showed that 45 per cent of those interviewed might change their mind over the 39-day campaign — meaning that the result is far from a given.

The Quebec election campaign officially launched today. There will be two televised leaders’ debates in French on September 12 and 30, and the province’s first-ever televised English debate will take place on September 17.