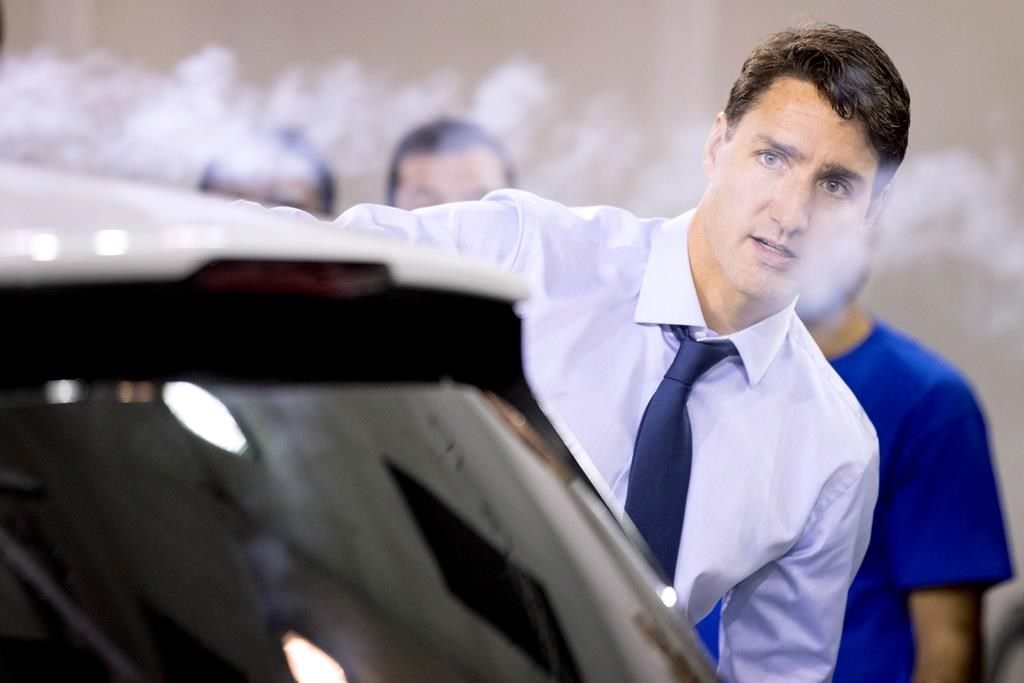 Prime Minister Justin Trudeau uses a smoke wand during a demonstration of air flow over a car during a visit to the University of Ontario's Institute of Technology in Oshawa, Ont. on Friday, August 31, 2018. Photo by the Canadian Press/Cris Young
Previous story
Next story

Justin Trudeau is standing firm on his government's commitment to build the Trans Mountain pipeline expansion and to its national climate-change plan — both of which were put in jeopardy by a bombshell court ruling that overturned federal approval for the project.

The government intends to move forward to get the pipeline expansion built "in the right way," the prime minister said Friday, indicating that the government accepts the Federal Court of Appeal's criticism of the approval process.

The court ruled Thursday that the National Energy Board's environmental assessment of the project was fatally flawed because it ignored the potential impact of increased oil tanker traffic off British Columbia's coast. It also ruled that the federal government had not fulfilled its duty to meaningfully consult with affected Indigenous groups.

"We are taking the time now to understand the court ruling, which addresses two things that are very important to this government — getting the science and the environmental protections right and making sure we are walking forward in a true path of reconciliation and partnership with Indigenous Peoples," Trudeau said after an event in Oshawa, Ont.

"We're going to continue to move forward to get this pipeline built in the right way by acknowledging what the court has said."

Underscoring Trudeau's determination, the federal government finalized Friday its $4.5-billion purchase of the pipeline and expansion project from Kinder Morgan. The government initiated the purchase last spring, after Kinder Morgan concluded the political and legal uncertainties surrounding the project rendered it too risky for its shareholders.

The expansion, aimed at getting Alberta's oilsands bitumen to B.C.'s coast where it can be shipped to overseas markets, would triple the capacity of the Trans Mountain pipeline between Edmonton and Burnaby to 890,000 barrels a day, and would increase the number of tankers in Burrard Inlet seven-fold.

Thursday's court ruling prompted a furious Alberta Premier Rachel Notley to announce that her province is withdrawing from the controversial national climate change plan and will stay out until the federal government gets its act together, as she put it. Without Alberta, Notley asserted, the national plan "isn't worth the paper it's written on."

But Trudeau said Notley's move doesn't alter the federal commitment to the national climate change plan — or have any impact on it for at least a few years.

The federal plan requires provinces and territories to put a price on carbon emissions — through a cap and trade system, a carbon tax or some hybrid scheme — of at least $20 per tonne, starting Jan. 1. The minimum price will rise by $10 per tonne every year until it reaches $50 per tonne in 2022.

The federal government intends to impose a carbon price on any province that fails to come up with its own carbon pricing scheme — including Alberta if need be, Trudeau indicated.

"I've always said, if there are provinces that don't want to participate in this climate change plan, the federal government will do it alone."

However, he said that won't be an immediate issue with Alberta since that province's carbon pricing plan remains in place and "is equivalent to the targets set by the federal government, at least for the next few years."

Notley's government started imposing a $20-per-tonne carbon tax last year, which rose to $30 per tonne this year. Until 2021, Alberta's price will be higher than or equal to the federal targets.

That could change, however, if Notley loses next year's provincial election. Jason Kenney, United Conservative party leader and front-runner in opinion polls at the moment, has vowed to scrap the province's carbon tax and join Saskatchewan and Ontario in a legal challenge to the federal climate plan.

In a report to clients Friday, Scotiabank predicted that the court ruling will delay the pipeline expansion by at least one year and "increases the likelihood that the project is abandoned altogether."

But Natural Resources Minister Amarjeet Sohi said in an interview that the federal government is analyzing the court ruling and hopes to "find a path forward on this as quickly as possible so that we can resume construction" on the pipeline project.

In its ruling, the court specifically proposed some remedies that it said could be implemented relatively quickly without having to redo the entire approval process.

It suggested that the government instruct the National Energy Board to reconsider its decision to exclude the impact of marine shipping from its review of the project and that it could even "specify a time limit within which the board shall complete its reconsideration."

The court also suggested that the government engage in a "specific and focused" dialogue with affected Indigenous groups about their concerns, which could be "brief and efficient" while still being meaningful and result in only "a short delay."

Sohi suggested the government has already taken steps to address the potential for an oil spill, with its $1.5-billion oceans protection plan, and to further engage Indigenous groups — steps which occurred after the court hearing began and were, thus, not considered in the ruling.

He said the ruling underscores the reality that pipelines will not be built in this country unless they include environmental protection and Indigenous consultation. Consequently, he said Notley's decision to withdraw from the federal climate change plan is counterproductive.

"I understand the frustration of the premier, absolutely," said Sohi, who represents an Edmonton riding. "But we also understand that abandoning a plan to tackle pollution is not the right approach to build a pipeline."

Manitoba Premier Brian Pallister, meanwhile, warned his fellow premiers that they risk losing control over the revenue raised from carbon pricing if they refuse to take part in the national plan, thereby allowing the federal government to impose its own scheme.

"If we just say no, we're letting the prime minister take our money out of Manitoba and away from Manitobans," he said in an interview.

The Trudeau government has promised that the revenue from a federal carbon price will remain in the province in which it's raised. It has signalled that the money will likely be returned through some sort of individual tax rebate to residents in a province, rather than to provincial governments that refuse to implement their own carbon pricing scheme.

The pro-pipeline people of

The pro-pipeline people of whatever stripe are riding a losing entry in the fast moving energy/climate stakes. There is no economic salvage to be gained from the tar sands - only liability upon liability, debt payments, clean-up payments, climate change costs....
Wake up all you laggards and try to catch up with those who have an eye on the future - not just the next election!

A 1.5 billion ocean protection plan, and a 4.5 billion old pipeline purchase. Am I the only Canadian that senses some kind of disproportion here????

1.5 billion...is that for all our oceans...or just the Pacific coast? And over how many years is this massive sum going to be doled out??? I suspect the KM shareholders want their 4.5 immediately, in one lump sum.

Seriously. We should be insulted if this paltry sum for our coastlines is held up to anything but ridicule. I know we're often penny wise and pound foolish....but if that's all our coastlines are worth...that 65 year old rusy pipeline is ludicrously over valued.