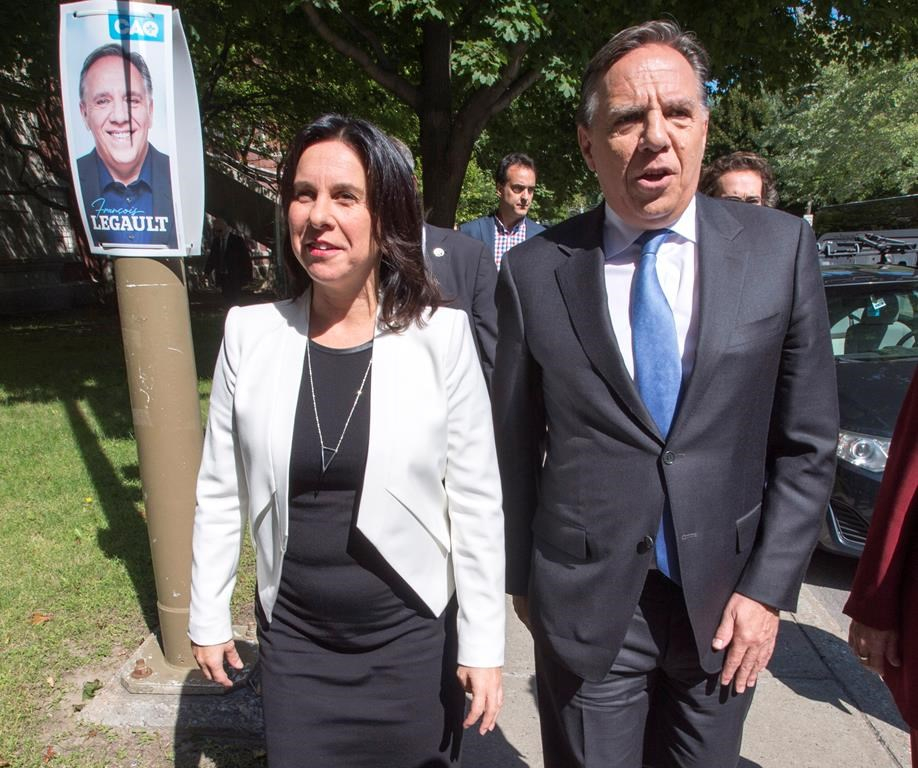 The perennially divisive topic of language politics surfaced on the Quebec campaign trail Friday as the leader of the Coalition Avenir Quebec promised his government would force new immigrants to leave the province if they don't learn French within three years.

After two weeks of campaigning nearly devoid of language talk, the issue jumped into the spotlight on Day 16 as party leaders responded to Francois Legault's proposals with differing visions on how best to integrate immigrants into French-speaking Quebec.

Speaking early Friday, Legault said new immigrants would be given a temporary permit upon entry and then have three years to take free language courses and pass a basic French-language test.

Those who fail would not be granted permission to stay and would be considered to be in the country illegally, he said.

Legault said most people should pass easily, but he's open to offering an extension or exemption to seniors or those with learning disabilities.

"I will be open to accommodations, if someone has learning difficulties," he told reporters. "Of course we won't ask them for the same."

"I want to be human. I don't want to ask them to do something that is impossible."

Legault said more than 50 per cent of immigrants who arrive in the province don't speak French and that many of those end up leaving or facing high levels of unemployment.

He warned that under present conditions, the use of French will gradually disappear.

"If year after year we accept 50,000 immigrants and most don't speak French, it's a matter of time," he said.

"It might take one, two, three generations but it's a matter of time before we stop speaking French in Montreal and that's not what I want."

The Coalition has proposed lowering the number of immigrants to the province to 40,000 a year from the current 50,000.

Legault's proposal was panned by Liberal Leader Philippe Couillard, who accused his rival of fear-mongering and wanting to "break up families."

He argued that Quebec's immigration policy has been a success, noting that about 50 per cent of all jobs in recent years have been filled by immigrants.

"Immigrants are learning French, and you know where they learn it best? At work," he said in Gatineau, near the Ontario border.

Couillard, who supports maintaining immigration at current levels, said he shares the views of younger Quebecers who are confident in the future and have little interest in what he called divisive language politics.

"We don't want a situation where we fear our neighbour, our work colleague," he said. "We don't want it — that's not the Quebec we have or we want."

Lisee said the right number of immigrants was likely between 35,000 and 40,000 per year, based on past "successes" and "failures.''

While he criticized Couillard for continuing to suggest a number that would lead to "broken dreams," Lisee maintained that Legault is the biggest threat to the French language.

"The worst thing we could do for French in Quebec is to adopt the proposition of the (Coalition), which would agree to have 40,000 people per year enter Quebec without knowing French," he said in Sorel-Tracy, northeast of Montreal.

The leaders also chose to focus on health care Friday, with Lisee promising to extend the opening hours of local medical clinics and to bring back a program to publicly cover the cost of a first round of in-vitro fertilization.

The previous policy, which ended in 2015, covered three cycles of treatment at a cost of $66 million per year.

Couillard, for his part, was met by a small protest as he promised to spend $525 million on creating 1,500 new long-term spots in government-run nursing homes.

The protest was made up of about 30 nursing aides who wanted to know how Couillard plans to offer adequate care to these new residents given an ongoing staff shortage.

Legault, meanwhile, met with Montreal Mayor Valerie Plante and told her he's open to new public transit projects for Montreal even as he remains opposed to her plans to create a new subway line.

— With files from Melanie Marquis in Sorel-Tracy, Patrice Bergeron in Gatineau and Caroline Plante in Montreal