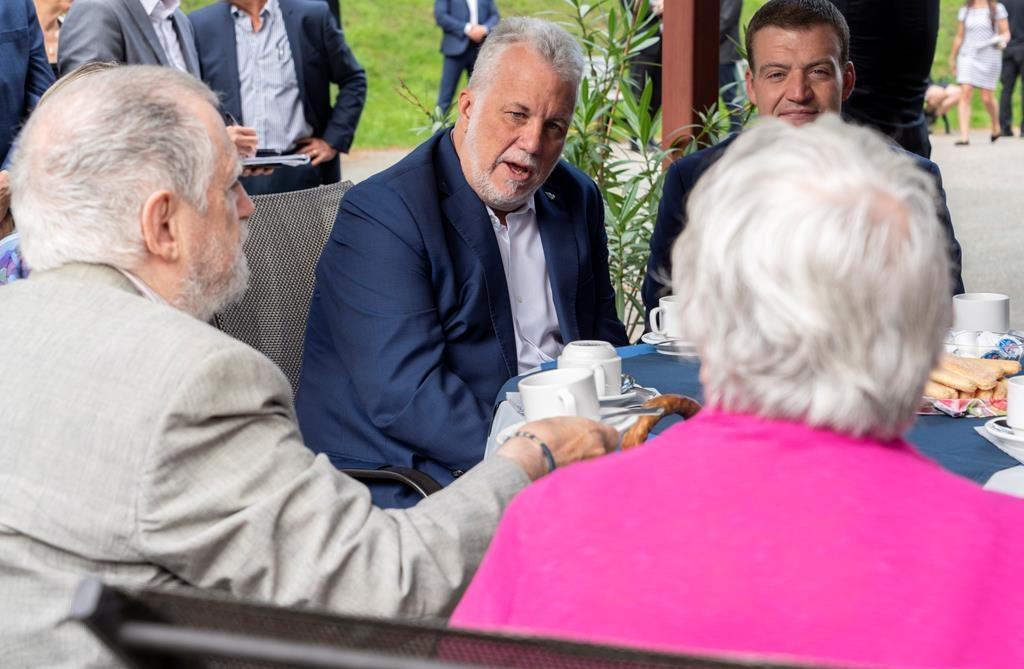 Liberal leader Philippe Couillard has tea with residents at a seniors residence during a campaign stop in Sherbrooke, Que. on Sept. 5, 2018. Photo by The Canadian Press/Paul Chiasson
Previous story

Promises to seniors and local farmers were overshadowed on Day 14 of the provincial election campaign after a Parti Quebecois candidate was formally charged with impaired driving and refusing to obey a police officer.

PQ Leader Jean-Francois Lisee was forced to respond to the news late in the day and said that if Guy Leclair wins his riding in the Oct. 1 election, he won't be able to sit in the party caucus until his legal matters are resolved.

Leclair, outgoing member of the legislature for the Beauharnois riding south of Montreal, is scheduled to appear in court Sept. 21, 10 days before the vote.

"I hope he is re-elected," Lisee told reporters. "He is an excellent member of the legislature. But until we get light (on the accusations) he won't sit in caucus."

The candidate was arrested July 13, but Lisee said he only found out about it toward the end of August.

Earlier on Wednesday, Liberal Leader Philippe Couillard promised seniors that if he is re-elected, they would able to suspend or postpone their pensions until the age of 75 if they wanted to continue working or return to their jobs.

Those who choose to do so would get a tax break, he said.

"Vast majorities of seniors are healthy and a lot of them would like to stay at work longer even after they received their pensions," Couillard said at a campaign stop in Sherbrooke, east of Montreal.

"In the present system they won't do it because it doesn't make sense for them financially — because they will be taxed on their pension and working income. So we're saying, you can suspend or postpone your pension so you won't get taxed anymore."

Couillard also promised to extend a tax credit for senior workers that would permit them to keep more money.

The Liberal leader said his government would increase by $1,500 the financial ceiling for seniors to receive a tax credit, allowing them to keep an additional $150 a year.

Lisee, meanwhile, said his government would provide all long-term care facilities in the province with air conditioning within its first mandate.

After a summer of record-setting temperatures, many elderly people in the facilities complained their living quarters were unbearably hot.

"Next summer there will be fewer jobs for journalists to go around in long-term care facilities in order to find out which ones are too hot," Lisee said in Rimouski.

"We will spend $100 million and outfit all long-term care centres and hospitals in Quebec with air conditioning."

The Coalition Avenir Quebec's focus Wednesday was on agriculture as the party pledged to encourage all provincial institutions to buy local produce by requiring they fulfil quotas.

Leader Francois Legault also reiterated his party's promise to reduce immigration to the province by 20 per cent within one year of taking office.

Quebec would accept 40,000 immigrants a year instead of 50,000, Legault said, in order to better integrate newcomers, in part by teaching them French so they are better able to find jobs and contribute to society.

Couillard called Legault's policy a "massive error" as cities across the province face crippling labour shortages due to a strong economy and aging workforce.

Party spokeswoman Manon Masse promised that if elected, her party would inject $2 billion into the education sector to hire more teachers and resource workers and to renovate school infrastructure across the province.