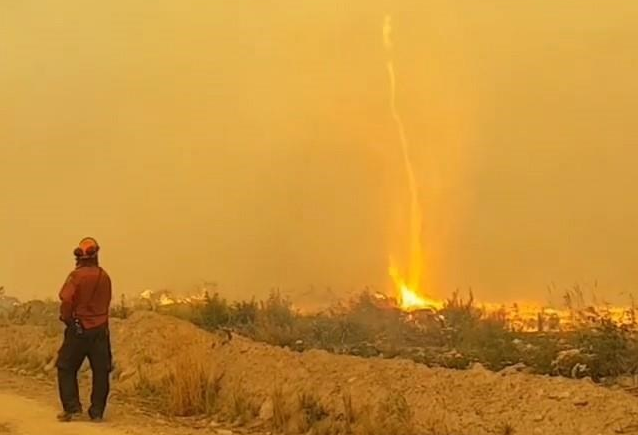 In a video posted to Instagram by firefighter Mary Schidlowsky, a "fire tornado" can be seen near Vanderhoof, B.C. on Aug. 19, 2018. Image from The Canadian Press
Previous story
Next story

A towering funnel of smoke and flames captured on video by a firefighter with the BC Wildfire Service is giving viewers a peek into the surreal world that crews have faced while battling some of the worst wildfires this summer in British Columbia.

In the video posted to Instagram by firefighter Mary Schidlowsky, three crew members can be seen in a tug of war against what she calls a "fire tornado," which is sucking a hose skyward like a kite string.

"Fire tornado destroyed our line. It threw burning logs across our guard for 45 minutes and pulled our hose 100 plus ft in the air before melting it. That's definitely a first," Schidlowsky writes in the post.

The smoke is too thick to show it, but Schidlowsky writes that the column stretches 60 metres into the sky.

After the crew members give up on the line the twister is seen spinning at rapid speed alongside the road. One crew member throws a rock at it, in an act of futility.

Fire information officer Kevin Skrepnek says the phenomenon known as a "fire whirl" can occur when high winds interact with a fire.

"When that combines with the rising heat off the fire it can create a kind of eddy and it's going to pick up some of the combustible gases, some of the smoke, sometimes the debris in the area as well," he said in an interview.

Skrepnek said it's not actually a tornado, but more similar to a water spout or dust devil that lasts a few seconds.

"Typically a fire whirl won't be as large and won't last as long as what you're seeing in that clip," he said.

The video was captured Aug. 19 near Vanderhoof while crews were fighting the Chutanli Lake fire.

Fire whirls are rare and Skrepnek said in his eight years with the Wildfire Service he has only witnessed one.

"It's not unusual on very intense and very large fires to see them, but to see one that up-close is fairly rare," he said.