Andrew Weaver on clean growth and why electoral reform will succeed in B.C. 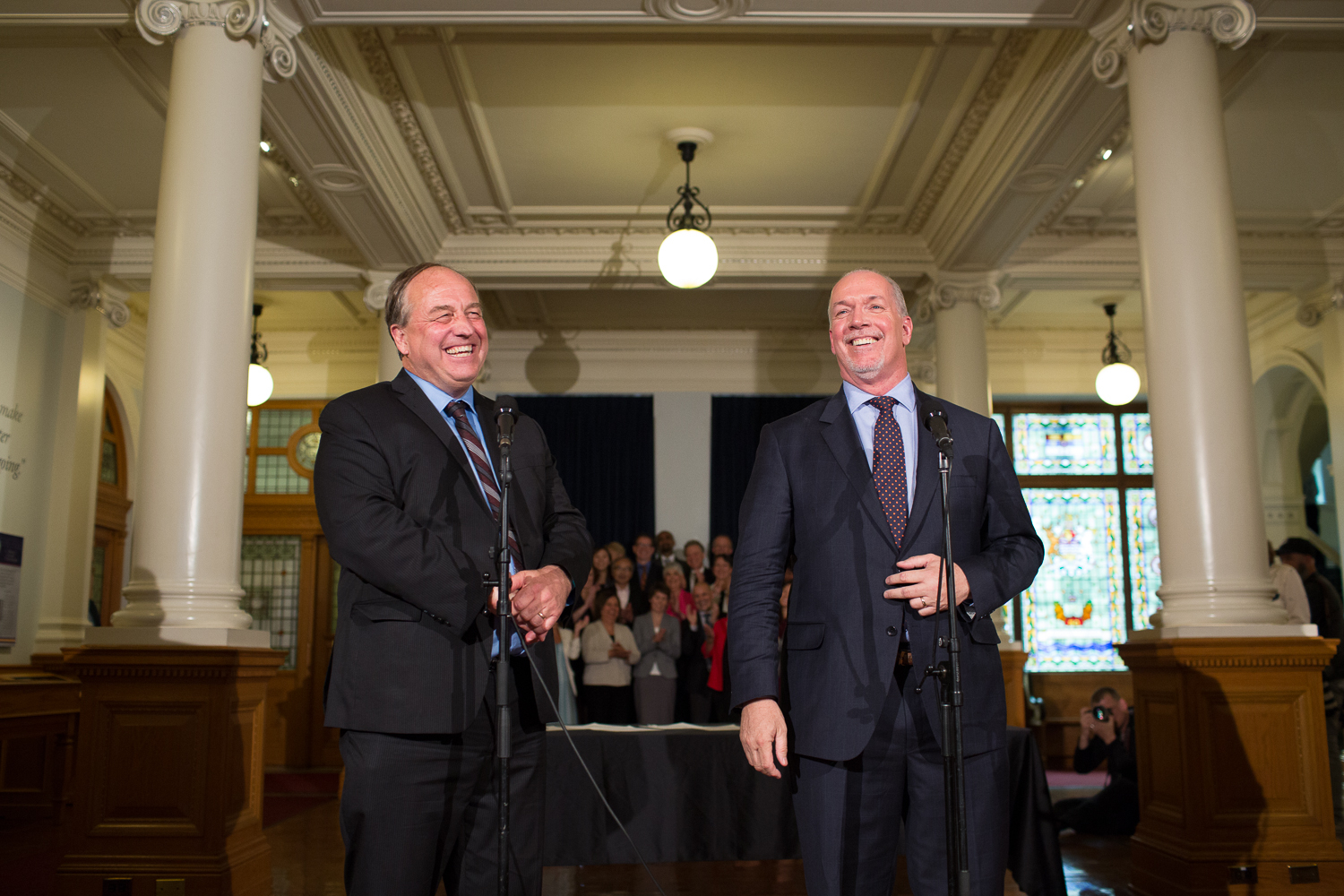 John Horgan and Andrew Weaver speak to the press after signing the coalition agreement, Victoria, British-Columbia in May 2017. Courtesy of the BC NDP.
Previous story

After a year of power sharing with B.C.'s NDP government, Green Party Leader Andrew Weaver says he’s excited about a new economic plan, but doesn’t believe environmental targets can be met if a planned LNG project goes ahead.

Weaver, elected as the province's first Green MLA in 2013, found himself and his party holding the balance of power in 2017 when B.C.'s election ended in a virtual stalemate. Weaver and Horgan negotiated an agreement to govern the province, which, so far, has held, giving stability to an NDP minority government.

Weaver praises many achievements of the NDP-Green power sharing alliance, including the elimination of union and corporate donations, work on economic innovation, a carbon tax increase and a plan to protect wild salmon.

“It’s been a very, very successful year in terms of policy development, not without its hiccups,” Weaver said in a phone interview.

LNG Canada is a joint venture of Shell Canada, which owns half, PetroChina, KOGAS and Mitsubishi, according to a B.C. government technical briefing. The B.C. government estimates the project would generate about $22 billion in government revenue over 40 years and would provide thousands of construction jobs and hundreds of permanent jobs. It estimates emissions from the first phase of the project would be about four megatonnes, and LNG Canada is planning for a second phase, which could double those emissions.

Meeting climate goals would still be possible if the project goes ahead, the government says, but concedes it would require faster progress on other things like the electrification of transportation and heating.

“We’ve challenged the BC NDP to show us how that will be done,” said Weaver, who was a climate science professor at the University of Victoria before entering politics.

Weaver also questions a series of economic breaks the government is proposing for LNG, including tax exemptions and access to the standard industrial electricity rate. A decision from LNG Canada is expected by the end of this year.

A promise to deal with climate change and the recognition that reducing greenhouse gas emissions is an opportunity, not a problem, are the key reasons why the B.C. Green Party decided to partner with the NDP rather than the Liberals in the first place, Weaver said.

But the Greens won't support legislation to enable the LNG plan as it now stands, Weaver said. However, the project could go ahead even without Green support if the Liberals choose to support it.

In October, B.C.. will decide in a referendum whether to change the electoral system. @AJWVictoriaBC is confident it will pass. Report by @TracySherlock #proportionalrepresentation #bcpoli #cdnpoli

Such a vote would not end the Green-NDP alliance, but if the proposed LNG plant goes ahead it could jeopardize a key part of the NDP-Green agreement, which is to enact a climate plan to meet the targets.

"If the project receives a (final investment decision) that the government is unable to reconcile with the Clean Growth Strategy, and the government still allows the project to go ahead knowing it will means we will certainly miss our climate targets, we will consider the government to be in violation of (our agreement), not to mention their own election promise to enact a plan to meet our targets," a spokesperson for the BC Green caucus said in an email.

B.C.'s Environment Minister George Heyman says the LNG project will only go ahead if it fits within the province's climate goals.

“We are developing a strategy to meet those climate commitments while supporting good jobs throughout the province," Heyman said in a statement. "Living up to our responsibility to climate action will require work from all of us – in government, business, communities and beyond. We welcome the thoughts and contributions of our legislature colleagues and all British Columbians as we work toward the fall strategy release.”

Weaver is also placing a lot of hope that the new economic plan — the upcoming clean growth strategy, expected this fall and referenced above by Heyman — will be a roadmap for both fiscal growth and a reduction in greenhouse gas emissions.

“It is a very, very bold economic plan that is exciting, it’s visionary; potentially if government follows through and it actually would put us on track for being a leader in the new economy,” Weaver said in an interview. “That, to me, is exciting.”

The clean growth strategy could include ideas like banning the sale of gas and diesel cars by 2040, using more electric buses or even ferries, and labelling homes for their energy efficiency.

On several key issues facing British Columbia – housing affordability, wildfires and the opioid crisis – the Green party’s approach differs from that of the governing New Democrats.

For instance, Weaver would follow New Zealand’s lead in restricting foreign home ownership in B.C., whereas the NDP has chosen instead to implement a number of taxes. In this year's budget, the B.C. government brought in a speculation tax on real estate, increased the foreign buyers' tax, introduced measures to stop hidden ownership of houses and introduced a new tax on homes valued at more than $3 million. Those measures were designed to deflate the sky-high housing market in Vancouver.

Under the Greens’ plan, people with Canadian passports or landed immigrant status could own homes, as could people who live, work and pay taxes in Canada.

He doesn't think you should be able to sit "in an office tower in Liechtenstein and park your capital into real estate here solely as an investment because you want to treat it like the stock market and you want to go in and go out based on profit.”

“That is what has happened in Vancouver – tons of offshore capital has flowed in, particularly at the high end which has dragged the market,” he said.

As B.C. continues to battle wildfires, Weaver says he co-wrote a paper saying global warming would produce more wildfires in 2004 and that he now believes things are going to get even worse.

“People start talking about the new normal – I can assure them this is not the new normal, because normal implies plateau, and plateau implies stability,” Weaver said. “We know that the increased likelihood of summer drought is going up so that more and more frequently we get bigger and bigger droughts, which lead to more and more wildfires.”

The recent Abbott and Chapman report into the 2017 wildfires says it would take $6.7 billion to treat the province’s high-risk areas, but Weaver says if steps had been taken a decade ago, today’s devastation could have been prevented.

As far as the opioid crisis, Weaver credits both the Liberals and the NDP with their work on harm reduction, but says he would like to see more work on prevention.

“It’s not too dissimilar from the forest fire issue. You’re spending all of your money putting out fires and dealing with the consequences there, rather than asking the question of why the fires are occurring and could we have done something to avoid these fires in the first place,” Weaver said.

More change on the horizon?

In October, voters in B.C. will decide in a referendum whether to change the electoral system.

Weaver is confident it will pass and says the questions have been structured very well. The first question asks whether the person voting wants the system to change, and the second question offers a choice of three specific systems.

“I think it will be a very strong support of yes. And I think that you’ll see a lower turnout of votes in the three options,” Weaver says.

“I have my preference, but to be blunt, I’m not hung up on any of those preferences. For me personally, I think we need a system that changes.”

He says the problem with first-past-the-post elections is that the party that wins – often without a majority of the votes – ends up with all the power, a problem he sees in recent elections both in the United States and in other Canadian provinces.

British Columbians can look to the past year of the NDP-Green alliance for a sneak peak at what a proportional representation government might look like. As Weaver says, it's not without its "hiccups." But it has also been a year of significant changes, some of which have an unmistakable Green tinge.

I will definitely be voting

I will definitely be voting in favour of changing the electoral system. That is 'Yes' on the first question. As to the second question, I agree with Dr. Weaver. don't get hung up on the 3 choices.

Weaver knows that LNG is a

Weaver knows that LNG is a huge negative. Fact, horizontal hydraulic fracking is an integral component of the LNG industry.

We need to stop carpet

We need to stop carpet bombing deep earth for export markets. LNG is madness from start to finish. Fracking is a dangerous, short term mop up operation, liquifying the fracked gas is expensive, lng is explosive, one more inherent danger to the waters its supposed to travel through en route to foreign markets.

And when all the extractivist infrastructure is built it may have to be maintained at public expense...for sure, foreign companies tend to bail once the profits are in decline......and at the end of the day, fuel we need to transition off the damn stuff won't be available for local projects.

Its a lose-lose-lose to the power of n.........neo liberal resource grab. Shelve it.

I'm surprised Mr Weaver has nothing to say about how B.C. is helping to prop up tar sands extraction by shipping it lots of extremely valuable “gas liquids” — byproducts of natural gas which are essential to dilute heavy oil or bitumen so that it can move more readily through pipelines. Read Ben Parfitt on BC's "gas giveaway" over at the Tyee.