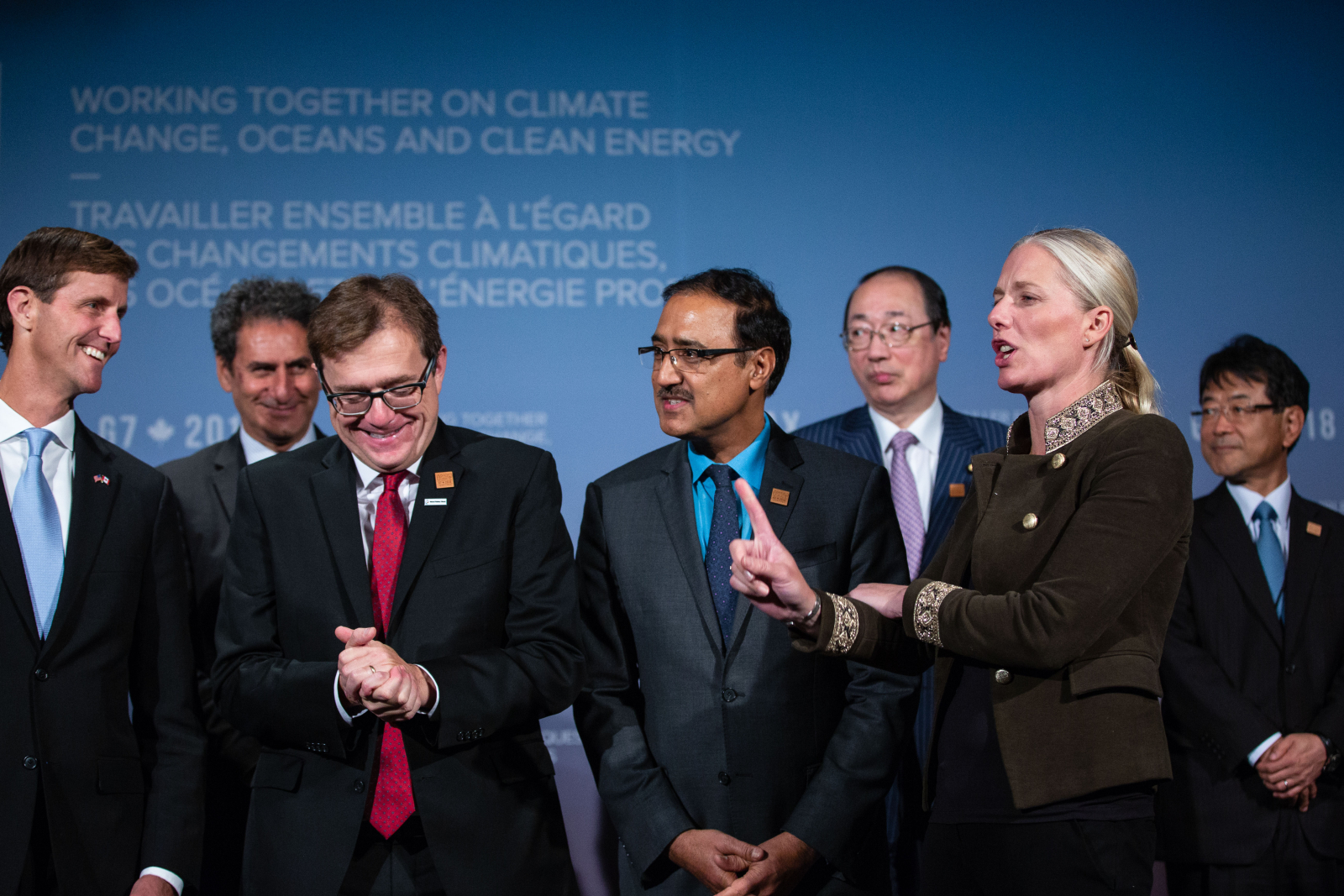 What is the difference between “many ministers” and “several ministers"?

If you think you know the answer, you’re well on your way to decoding Canada’s pronouncements about the meetings of representatives from G7 nations and observer states that it hosted in Halifax last week.

Canada has released what are known as “chair’s summaries,” the official record of the Sept. 19 to 21 talks in Halifax, held in a highly-secure hotel conference room between members of the G7, or Group of Seven advanced nations.

The G7 is an informal grouping of some of the world's most developed economies, consisting of Canada, the United States, the United Kingdom, France, Germany, Italy and Japan, with representation from the European Union. It was created in the 1970s to address tough problems facing the planet, like the oil shock, and has gone on to tackle foreign policy challenges.

Leaders from the group come together each year, brought together by a host country which rotates each year, to try and commit to common economic, political and social goals. This year, Canada hosted the G7, and held its leaders' summit in the Charlevoix region of Quebec in June.

The host country also holds meetings throughout the year that bring together political leadership from G7 members to address specific issues. The meetings in Halifax were the final calendar item on Canada's G7 presidency, and aimed at addressing climate change, pollution in the oceans and the growth of green energy.

The chair's summaries are written from the host country's perspective. While they don’t require strict consensus from the rest of the club’s members, they appear to require some delicacy, and diplomatic skill.

For example, the chair’s summary of the Sept. 19 meeting of G7 environment ministers says that “many ministers” stressed that the impacts of climate change were an “existential threat,” attacking human health and food security, and putting developing nations, Arctic and Indigenous groups in danger.

“Many ministers emphasized the need to take more ambitious action to reduce global emissions,” the statement added. “Several ministers stressed that failing to act now would have tremendous economic and human impacts.”

From this statement it is unclear which countries' officials did not wish to express the notion, supported by a virtually universal global scientific consensus, that failing to act on climate change will have serious consequences for humanity.

As well, while the world is only a few weeks away from the next United Nations climate conference in Poland, and UN Secretary-General António Guterres has expressed concern world leaders won't be able to overcome sticking points in time for the summit, it appears not every G7 country is on board with putting a price on carbon pollution.

The chair’s summary said “many” — not all — ministers “highlighted” how “putting a price on carbon pollution at a sufficient level” and other actions “help drive sound investment” toward “long-term goals.”

This year's statement also said “most ministers” said the Paris climate agreement, under which Canada has committed to cut its emissions of carbon pollution 30 per cent below 2005 levels by 2030, was “irreversible,” and reaffirmed their commitment to it and their support for its completion.

In that case, it’s not hard to guess at least one person in the room who disagreed with supporting Paris — Andrew Wheeler, U.S. President Donald Trump’s environmental deputy. Wheeler spent the week in Halifax saying very little, other than to note that his boss is still opposed to the agreement after moving to pull the U.S. out last year.

Environment and Climate Change Minister Catherine McKenna gave a press conference after the meeting, shedding a bit more light about some of the closed-door discussions.

“One of the big discussions we had,” she said, was on the so-called Paris “rulebook,” the term used to describe the specific rules underpinning the Paris agreement that McKenna has been pushing to finish by December.

She also said the group had a “good discussion” about helping populations that are the most vulnerable to climate change, such as developing states and islands, adapt to the impacts of climate change.

Their vulnerability is something all G7 ministers agreed to in the chair summaries. However, when it comes to help, the support is less universal: only “some” G7 ministers, for example, recognized that lower-income, small island developing states “face barriers in accessing financing.”

The G7 also heard from Canadian ambassador to France Isabelle Hudon, co-chair of the G7 Gender Equality Advisory Council. McKenna noted the council and also referenced her own women climate leaders summit earlier in the year.

She added she was “pleased to hear from business leaders” about plastics pollution and “had a good discussion about the need to conserve more of our nature” through supporting carbon sinks like mangroves.

This year there are no footnotes on policy, unlike 2017. All seven nations did, however, agree to join the Equal by 30 Campaign, a commitment to strive for equal pay and opportunities for women in the clean energy sector by 2030. The statement lists all the countries by name on that one.

Natural Resources Minister Amarjeet Sohi showed up for the final G7-Halifax press conference — where National Observer was the only media participant — proudly wearing a pin symbolizing the campaign.

“One thing I would say that’s a very good achievement, is that all G7 countries have agreed to participate in the campaign,” he said. “This not only makes good economic sense, it’s not only the smart thing to do, it’s the right thing to do.”

Sohi also mentioned two outcomes from the energy ministers’ meeting: A commitment to beef up security of "critical energy infrastructure" by developing common knowledge and subject matter expertise among members, and the launch of "studies of pilot projects" to modernize power grids.

“We had very good meetings on how we move forward on continuing to develop and diversify our energy sources,” said Sohi, “moving toward cleaner sources of energy, and the potential for offshore energy development.”

“As you can imagine, the energy infrastructure spans vast geographical areas, and provincial-international boundaries, and we need to work together to ensure that we are prepared in the case of challenges related to cybersecurity,” he said.

Subsidies promise makes it into writing

The G7 pledge in 2016 to eliminate subsidies to fossil fuel industries by 2025 found its way into the chair’s summary on energy last week, issued after the meeting had ended.

“G7 countries reaffirmed commitments to phase out inefficient fossil fuel subsidies that lead to wasteful consumption and encouraged all countries to do so by 2025,” the document reads.

Canada is the largest provider of fossil fuel subsidies in the G7, per unit of GDP, according to a recent study. Last year the group dropped a reference to oil and gas handouts in its main statement, and this year it didn’t appear either.

On Wednesday, McKenna appeared unwilling to get into details about any subsidies talks the group may have had.

Asked about the topic later in the week, Sohi said Canada was “moving toward phasing out” the subsidies.

“We also understand that growing our economy and creating jobs is equally important, as well as taking action on climate change and moving towards both a green economy and green energy, that’s exactly what our government is focused on,” he said.

Ms. McKenna is a

Ms. McKenna is a contradiction. On the one hand she insists that she really does care about our environment and of paramount importance is our being weaned off of fossil fuels as Mr. Trudeau had promised us. On the other hand she is all in on Canada participating in increased bitumen pipe transportation and opening up an LNG Industry whose integral component is the pariah to Mother Nature called horizontal, hydraulic fracking. Who's side is she really on? Industry?

I hate the words several,

I hate the words several, many etc. They indicate lack of survival knowledge or manipulation. At the very least you need a word like majority. I read several and many as, at best from the perspective of the speaker as meaning minority. A journalist should never accept those words. They should ask for clarification, of they do not get it they should day they asked but no clarification was offered.

The hotel room is the wrong

The hotel room is the wrong shape for a productive meeting.

A round room, such the Asia Pacific Room in the Wosk Centre in Vancouver, provides an environment in which the participants are more nearly equal. The dynamic is quite different from that of a lecture room. Just ask the members of the 2004 BC Citizens’ Assembly on Electoral Reform.