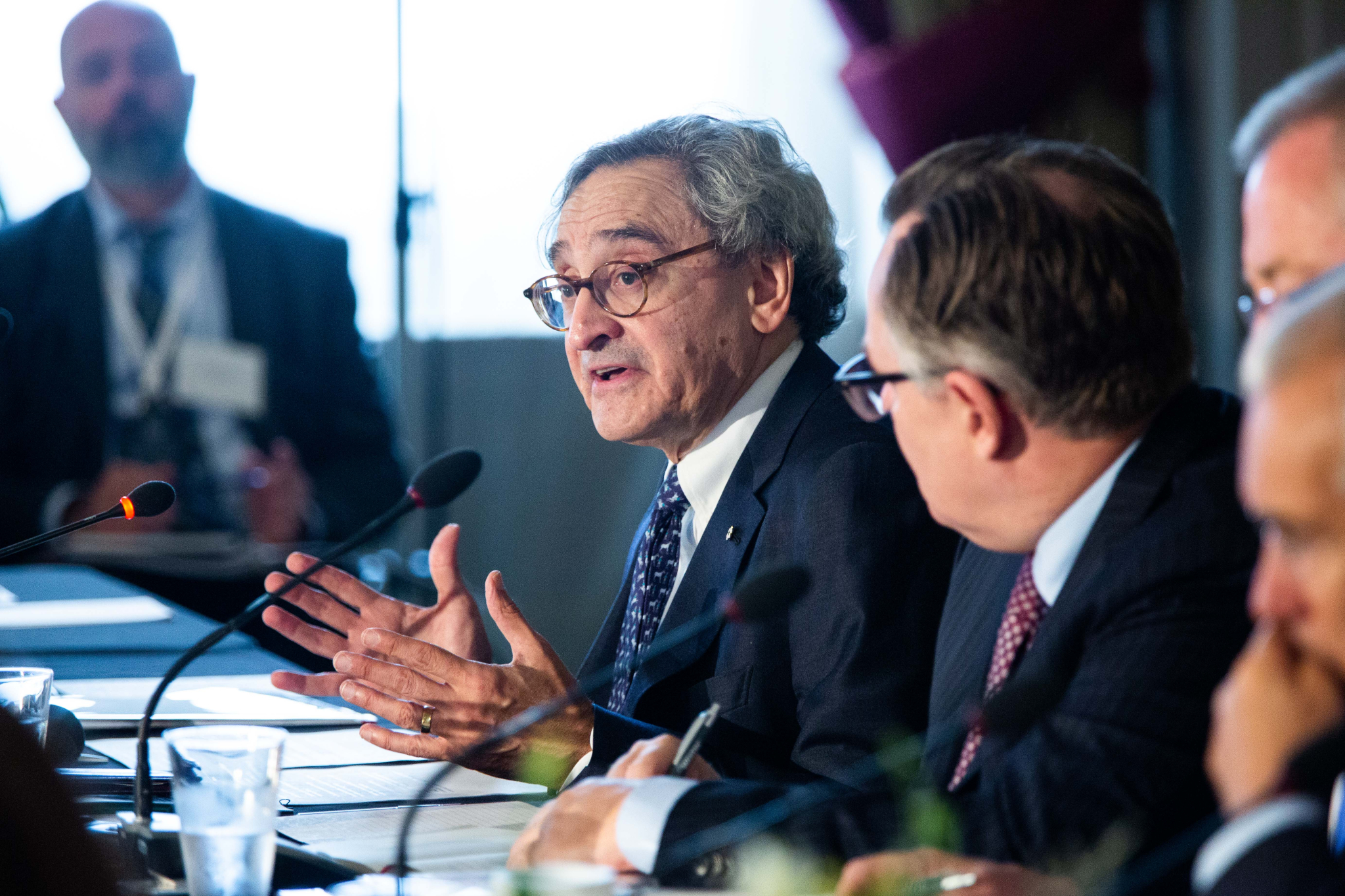 Michael Sabia, the president of Caisse de dépôt et placement du Québec, speaks to a meeting of government and private sector officials in Halifax on Sept. 18, 2018 on the edges of the G7 ministerial. Photo by Alex Tétreault
Previous story
Next story

Too many investors are still seeing climate action as a restraint on profit, the president of one of Canada’s biggest pension plans told a room full of foreign government officials and private sector leaders Tuesday.

Michael Sabia, the president of Caisse de dépôt et placement du Québec, which manages $300 billion in assets, made the remarks at the opening of a meeting on the “new climate economy,” organized on the edges of the G7 environment ministerial in Halifax.

“Too many investors, even long-term oriented investors today, still see climate change as a constraint — something that forces them to make a choice, to compromise their returns, and therefore runs counter to their fiduciary obligations to their clients,” said Sabia.

“As long-term investors, collectively, we need to think differently, because addressing climate change is not only about what you stop doing — more importantly, it’s about what you start doing.”

Watch National Observer's live stream of the opening remarks given by government and private sector officials in Halifax on Sept. 18, 2018 on the edges of the G7 ministerial. Facebook Live

Sabia didn’t name specific investors or governments at the meeting in a hotel conference room, but spoke about the trillions of dollars in economic gains that studies have shown will be available to nations that shift to a low-carbon economy.

Reporters were permitted to hear opening remarks from some speakers before they were ushered from the room.

Nicholas Stern, chair of the U.K.-based Grantham Research Institute on Climate Change and the Environment,was expected to prepare a briefing on the rest of the closed-door meeting for the environment ministers from the Group of Seven nations meeting on Wednesday.

The pension plan was among Canadian companies listed as some of the top investors in new coal power plants overseas, according to a December 2017 report by Friends of the Earth Canada and Germany's Urgewald. The federal government has been pushing to phase-out coal power worldwide.

Asked by National Observer after the meeting whether the group had discussed investments in coal power, Marc-André Blanchard, Canada’s ambassador to the United Nations, said “we discussed infrastructure in a very wide sense.”

In June, La Caisse and Ontario Teachers' Pension Plan announced a partnership with the Canadian government and several financial services companies in G7 countries to come up with a unified approach to disclose climate-related risks, among other objectives.

The pension plan also produced a climate change strategy in 2017, committing to a 25 per cent decrease in carbon pollution per dollar invested by 2025, a 50 per cent increase in “low-carbon investments” by 2020 and to “factor climate change into all our investment activities and decisions.”

Three federal Canadian ministers will co-host their counterparts from France, Germany, Italy, Japan, the United Kingdom, and the United States, as well as the European Union, this week for meetings on energy, oceans and fisheries, plastics and marine waste, and a just transition for workers in the fossil fuel industry.

Sabia has worked at high levels in both government and business, as a deputy secretary in the Privy Council Office and as president of Bell Canada International and chief financial officer at Canadian National Railway. He also said the pension plan has noticed that consumer attitudes and buying patterns are now changing.

“Climate change is becoming a popular issue, a people’s issue. We see this frequently — we see it in the companies we invest in,” he said. “How? Because their growing concern is to ensure that their brands are seen by the public to be on the right side of this defining issue.”

He said across industries as diverse as real estate, agriculture, transportation and electronics, there has been progress on reducing emissions, “but frankly, not enough.”

As an example of the scope he envisions, he said at least 50,000 megawatts of new wind power is being installed annually, the same as produced in a year by Hydro Quebec, which he said was the fourth-largest hydro producer in the world. Meanwhile, solar power’s price is five times lower than a decade ago, and in several countries, such as India and China, solar is cheaper than coal and gas plants.

Sabia also took aim at governments, although not naming any, noting that while some have introduced carbon pricing and reformed their tax code to address climate change, “obviously, in other countries, governments are going to need to demonstrate greater leadership on this issue.”

And he noted the urgency of climate change, compounded by “growing economic pressure on the middle class and the related issues of the rise of populism and trade protectionism around the world.”

“Climate change is real; it’s gone beyond the point of being a risk,” said Sabia.

Blanchard, Canada’s ambassador, also gave opening remarks. He noted that Jamaica — one of the non-G7 countries, along with Marshall Islands, Norway and South Africa who sent representatives to the meeting — had worked with Canada to secure a crucial UN meeting.

Courtenay Rattray, Jamaican ambassador to the United Nations, “and the leadership of the entire Jamaican government,” helped Canada round up 60 countries for a discussion at the UN hosted by the secretary-general focusing on sustainable finance, said Blanchard.

“We’re here to show leadership and demonstrate a sense urgency through commitment,” he said. “Lots of capital is urgently needed. Governments alone cannot do it.”

In G7 economies, added Blanchard, the private sector controls most capital, so how it responds to the climate crisis can have a big impact.

It isn't necessary to wait

It isn't necessary to wait for your financial advisor to tell you where to put your money if you want to divest from fossil fuels. There are lots of opportunities to invest in companies that are building infrastructure for a future that is not dependent on burning fossil fuels for energy. What is necessary is government leadership and that's where we in Canada have a problem. The federal government is mired in defensive politics and provincial governments are controlled by the vested interests that, as the article says, see the way forward as 'grow the economy' without being 'anti-profit'.

I'm just a single drop - if

I'm just a single drop - if that - in the investment bucket. I'm in the process of divesting my minuscule holdings in the petroleum related sector and desperately trying to find "green" alternatives. My investment advisor is working on it too - so far no luck! WTF? Most likely there are lots of tiny investors like me who would switch - given the opportunity. As my scottish grandmother would say - many mickles make a muckle.... Perhaps Mr. Mulligan can make some suggestions?

These are the kind of bright

These are the kind of bright boys who want to make sure my grandkids don't have a future.....we divested from fossil fuels a few years ago.....and in Alberta, that means we might as well put up solar panels with our extra money. Which is what we did and are doing.

My partner read that something like 6 trilian have already been divested from fossil fuels globally......only a matter of time before we get our pension funds into renewables....not that we have much time left to choose a sustainable direction forward.

Just this week I was notified

Just this week I was notified of a report from Genus which says, "Our experience shows that divesting fossil fuels does not mean sacrificing potential returns."
It's at https://www.genusfossilfree.com/2018-divestment-report/

If anything it's the reverse

If anything it's the reverse . . . there's gonna be a lot of stranded assets down the road. It's musical chairs; the music's still playing right now, but when it stops a lot of people invested in fossil fuel related stuff are gonna find their chair disappeared.

"Too many investors are still

"Too many investors are still seeing climate action as a restraint on profit, the president of one of Canada’s biggest pension plans told a room full of foreign government officials and private sector leaders Tuesday"

And even the boards of many/most universities fall into that stunned state of greed.