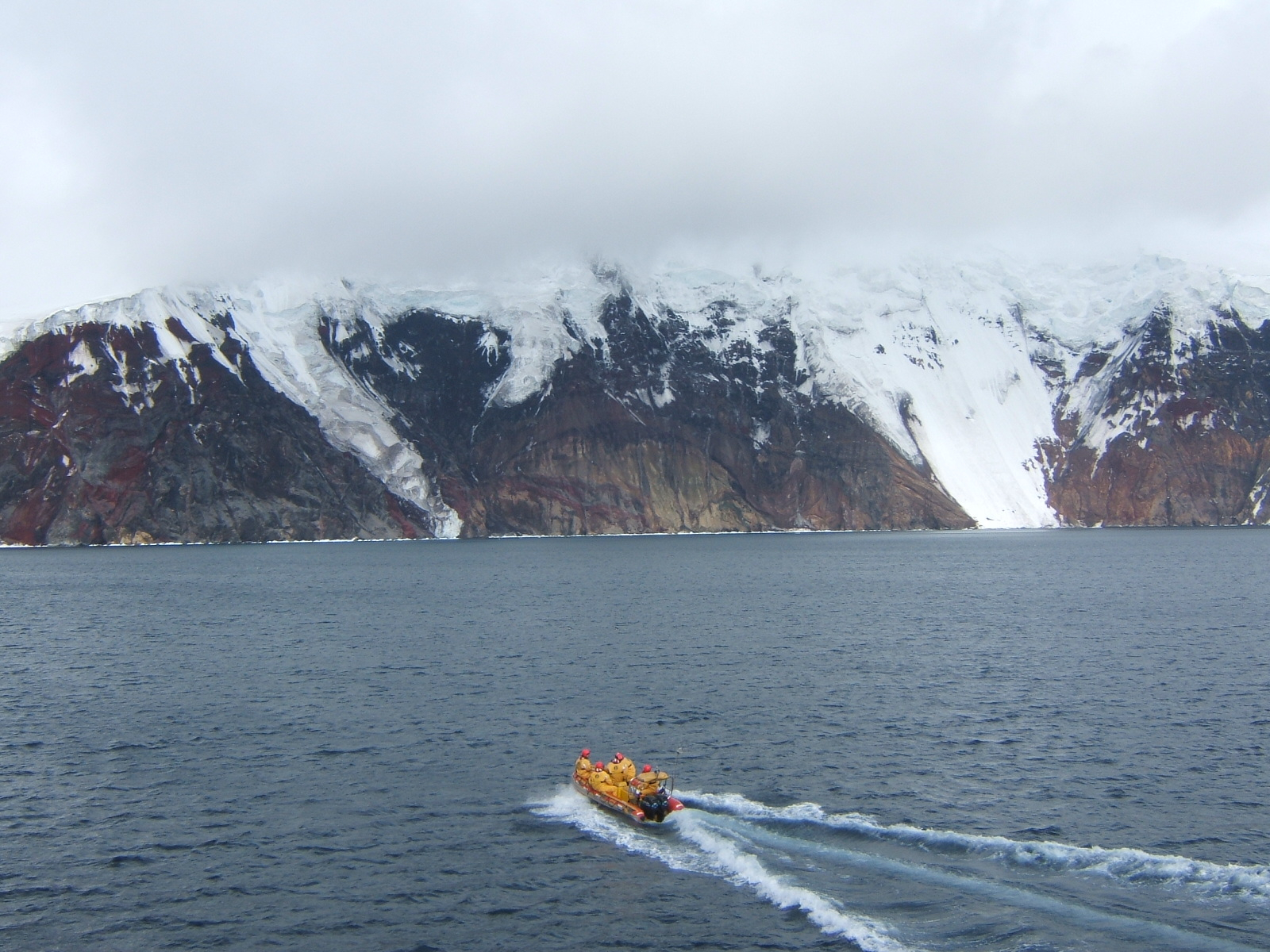 Researchers take part in a 2006 sampling expedition around Antarctica on the SA Agulhas. Photo courtesy of Neil Swart
Previous story
Next story

Neil Swart had barely begun his master’s degree at the University of Cape Town when he embarked on a three-month voyage to the South Pole.

At the time, Swart thought of himself as a volunteer helping further “someone else’s science.” He didn’t expect that 13 years later, the data he collected would allow him and a team of researchers to identify human activity as the number one cause of rising water temperatures in the Antarctic Ocean, also known as the Southern Ocean.

“It’s kind of nice to see it come full circle,” Swart, now a researcher with Environment and Climate Change Canada, told National Observer in an interview.

Along with other scientists from the department, and the Scripps Institution of Oceanography in California, Swart found that changes seen in Southern Ocean temperature are directly tied to ozone depletion and human-induced greenhouse gas emissions, as opposed to regular temperature variations or responses to natural climate changes, such as volcanic eruptions or changes in the sun.

Their findings were published in the scientific journal Nature Geoscience on Monday.

Serious consequences for the ocean

While the connection between human-made greenhouse gas emissions and rising global ocean temperatures has long been understood, this is the first time it has been proven specifically for the waters that surround Antarctica, explained Swart.

"We have to get to zero emissions at some point in the future if we were to stabilize the climate,” said Environment Canada scientist @Neil_C_Swart #climateaction #climatechange #oceans

Since industrialization, the ocean has absorbed nearly 40 per cent of human-made greenhouse gas emissions. The Southern Ocean, according to Swart, is responsible for absorbing the majority of those emissions.

“The Southern Ocean is the single most important region globally taking up the heat associated with global warming,” he said. As a result, it plays a huge role in mitigating the effects of climate change.

“If it weren’t providing these services, so to speak, we would be experiencing far more CO2 increases in the atmosphere. So understanding changes in this region is really critical.”

The consequences of human-induced warming in that region are not minor, he added.

"By driving an intense warming of these southern waters, we’re increasingly destabilizing the Antarctic ice sheet,” he said. That contributes to well-documented increases in sea level, affecting coastal populations, he explained, and “the warmer ocean water becomes, the less effective it becomes at absorbing CO2.”

Only 1 plausible reason for So. Ocean warming in last 50 yrs, say @environmentca and Scripps scis in @NatureGeosci. Using data from Argo network & other sources, find "human-caused increases in GHGs and stratospheric ozone depletion" is cause. @jcommops https://t.co/vs46Z6FCgH pic.twitter.com/7QvqwtRuTk

Swart explained that as the ocean’s ability to absorb climate-warming carbon dioxide decreases, global temperatures stand to increase, all of which could lead to greater weather extremes, such as more heat waves and changes in or stronger precipitation events.

To attribute the rise in ocean water temperature in the region to human activity, Swart and his team used simulations based off historical data and recent observations. By removing contributing factors from their simulation, the researchers were able to pinpoint the the cause as being man-made greenhouse gas emissions and ozone depletion.

Fossil fuel production and consumption are some of the greatest emitters of greenhouse gases. In 2015, 26 per cent of Canada’s greenhouse gas emissions came from the oil and gas industry.

In a 2012, Swart and Andrew Weaver – then a climate scientist, now an MLA in British Columbia and head of the province’s Green Party — published a controversial article in the journal Nature Climate Change. The pair suggested coal was a bigger threat to climate change than oilsands, while stressing that there was a need to move toward non-greenhouse gas emitting sources of energy and avoiding new fossil fuel infrastructure. After their research was used by pro-oilsands advocates to justify calls for expansion, the two scientists later reiterated that all fossil fuel use needs to be regulated to reduce global warming.

“If we go above that, we will exceed that target threshold. We have to get to zero emissions at some point in the future if we were to stabilize the climate.”

While it’s a lofty goal, Swart said ozone depletion is a good example of a climate problem tackled by policy. The Montreal Protocol, which took effect in 1989, helped eliminate the production of chlorofluorcarbons, a chemical that contributed the depletion of the ozone layer and was once commonly found in refrigerators and aerosol sprays. In the decades since, there has been significant decrease in ozone depletion.

Last November, an amendment was added to the protocol to reduce production of hydrofluorocarbons, which are used similarly to chlorofluorcarbons. Titled the Kigali Amendment, it will come into effect on Jan. 1, 2019.

“As a result, the consequences of (ozone depletion) are not going to be as severe as they would have been if we hadn’t taken action,” said Swart.

“I think that provides a good model for the case with CO2 – that we also have to take some kind of similar action which ultimately deals with the problem.”

13 years ago we crossed the formidable Southern Ocean, collecting (a tiny fraction of) the data used in our study, published today, explaining why the region is warming so rapidly. https://t.co/o1sB1TkNdK @ECCCSciTech pic.twitter.com/jpeFp2QaM1

The Pan-Canadian Framework on Clean Growth and Climate Change is one of the federal government’s attempts to take such action. The strategy, which was introduced in December 2016, is meant to significantly reduce Canada’s greenhouse gas emissions by 2030. It intends to do so, in part, through a carbon tax scheme, which Ontario, Saskatchewan and Alberta have all opposed.

Canada has also committed to the Paris Agreement, along with 194 other countries in December 2015. Though not legally binding, in doing so, Canada also pledged to take action to limit a global temperature increase of 2 degrees this century.

Editor's note: This article was updated at 11:05 p.m. on Sept. 25 to add additional details and clarification about the 2012 study by Neil Swart and Andrew Weaver and clarify that they didn't backtrack on their article, but instead responded to how it was being interpreted by pro-oilsands advocates.

You know, people would be

You know, people would be more apt to believe these "scientists"| if they actually practiced real science and based their writings upon what was actual observed. As the article states, "Swart and his team used simulations based off historical data and recent observations. By removing contributing factors from their simulation, the researchers were able to pinpoint the the cause as being man-made greenhouse gas emissions and ozone depletion"

You see the problem here? Instead, all of these global warming alarmists creating their own data, what if they went back to the actual scientific method? You know....observation, hypothesis, experiment to test; conclusion. If the experiment backs up your hypothesis...you are on to something. If not, go back and start again.

This is why no one believes you. Every time someone comes up with a new study, it is always based on simulation, or includes the removal of data (that doesn't fit the narrative being touted) that may impact the actual results. We have seen numerous examples of fraudulent "research" and science. Michael Mann and his hockey stick come to mind. As do the numerous examples of other so-called "scientists" who are approaching their research from a backward motion. Theirs is an example of anti-science. Today's global warming alarmists use the following methodology. Conclusion, manipulate data, create model using data to corroborate, then publish as conclusive.

I'm sorry, that is not how it works. Even folks of a non-science background can smell BS when they hear it. How many times do you think people can be lied to, frightened, or fooled by these fraudsters before they simply stop listening. Well, that is where we are now. Folks who may have listened, have stopped because they are tired of being lied to, or blamed for what is to come. We call bullshit.

I believe in global warming, but if we are going to fix it, or mitigate its effects, we need to stop lying to people and start looking for an actual answer based on what is seen; not what is simulated, or altered to fit the conclusion you were already looking for.

Richard Lane - Swart collects data on the South Ocean, a scientist observing what is actually happening. He then compares that with historical data, also collected by scientists observing what was actually happening. They then hypothesize what could have led from the historical data to the new data. They then test those hypotheses using the data in simulation. After doing so they come to a conclusion based on their findings. You seem to take issue with ‘the removal of data’ when that is part in parcel of the scientific method. Isolate what you are studying so that you can control all factors in the experiment. We are currently running a world wide experiment in man made global climate change where we control almost none of the factors. How the data and what data was removed is important, but it doesn’t automatically mean the study is BS. If we want scientist to be trusted we need to stop implying that credible research journals are publishing ‘lies’.

Q: How does one measure and

Q: How does one measure and or observe a future event for which there is no data because the future has not yet occurred? Ans: "By using simulations based off historical data and recent observations.."
Mr. Lane the language you use; "global warming alarmists", "fraudulent "research" and science", betrays your long winded bias. I call bull shit on your comment.

I see I have touched a nerve

I see I have touched a nerve with those who are not accustomed to being questioned. Typical.

One can see the circling of the wagons once again amongst the climate alarmist crowd. Sorry folks, you have been caught fudging the data one too many times. In fact, almost every prediction these "scientists" have made for the last 30 years has been wrong. How many times do you expect us to listen to your garbage science; when you cannot even make one conclusion that proves true?

Al Gore warned us that the oceans would rise 20 feet within the next 20 or 30 years, then went out and bought a multi-million dollar mansion on the ocean coast. See...even he knew he was full of it.

Look at the histrionics surrounding these various climate treaties. Particularly KYOTO. No one met the kyoto protocol targets, and yet, the world has not ended as predicted. Instead, we are repeatedly warned that we mus listen to the IPCC, and sign on to every virtue signalling (Paris) treaty or we are all doomed.
Let's be honest. The only reason the climate alarmist crowd wants these treaties signed is to save their own damaged reputations. Because look what would happen. If no one signs these treaties and the world does not end in a fiery ball of fash, then the climate "scientists" are shown to be the frauds they are. If however, the treaties are signed and the world doesn't end in a fiery ball of ash....then these fraudsters can stand up and take credit, "See, we told you we would save the planet"

Climate changes ...always has, always will. But instead of using this reality to tell people how to live, or to scare them into paying untold billions to faceless bureaucrats, what say we just find an affordable way to mitigate the impacts?

Lying to people doesn't work....we will find out about it. Talk to them honestly....that is how you get there.