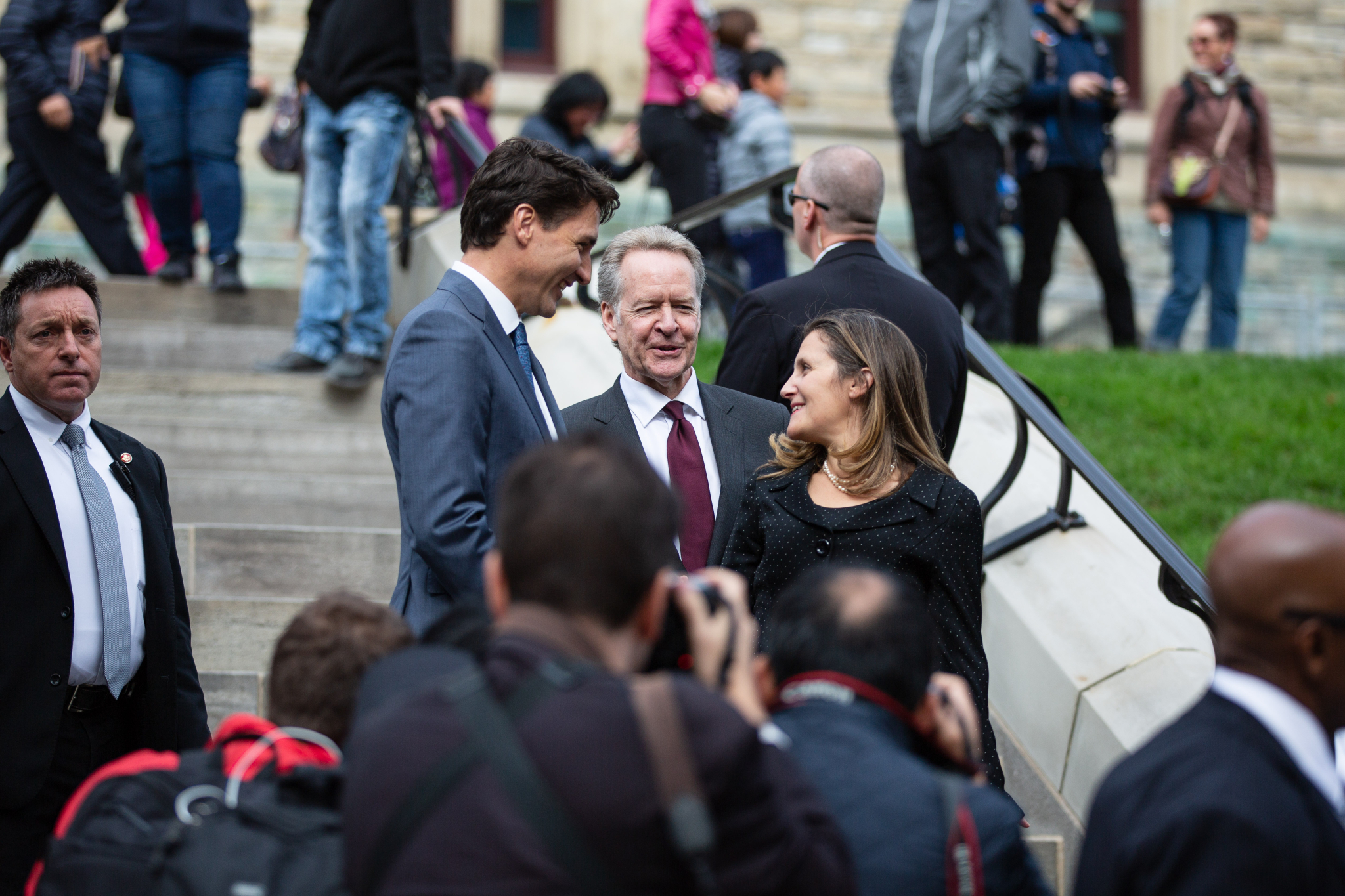 Prime Minister Justin Trudeau chats with Canadian NAFTA negotiator Steve Verheul and Foreign Affairs Minister Chrystia Freeland on the steps of Parliament Hill before heading to talk with reporters about the USMCA on Oct. 1, 2018. Photo by Alex Tétreault
Previous story
Next story

The new trade deal between Canada, the United States and Mexico does not appear to explicitly mention the terms "climate change" or "global warming."

But the United States-Mexico-Canada Agreement (USMCA), meant to replace NAFTA, does contain an "environment" chapter that makes reference to forests as carbon sinks, "air pollution" and "pollution from ships," tracking air quality data and co-operating on ozone-depleting substances.

It also jettisons one of the most controversial aspects of the old deal, known as the "proportionality clause," that required Canada to send a certain portion of its energy production south of the border.

It caps off 14 months of awkward and difficult negotiations over the future of an economic region, North America, that represents 530 million people and a quarter of the world's GDP.

The talks had originally been spurred by campaign rhetoric from U.S. President Donald Trump that he would either renegotiate or terminate NAFTA because he felt it was a “disaster” and the “worst trade deal."

'Modernizing NAFTA was no easy feat'

"Modernizing NAFTA was no easy feat," said Trudeau at a press conference alongside Freeland at the National Press Building. "We insisted on obtaining a good deal. Like any important negotiation, we had to make compromises. I can tell you, some were more difficult than others."

Among other changes, the USMCA would allow for an expanded 3.6 per cent market access to Canada’s domestic dairy market, a change that Trump insisted Monday was necessary to get a deal done.

“Dairy was a dealbreaker,” the president told reporters at his own press conference outside the White House, before Trudeau spoke.

Former prime minister Brian Mulroney heralded the deal as a "highly significant achievement for Canada" and said the country appears to have achieved most of its objectives.

"I said at the beginning that there is no Conservative or Liberal way to negotiate a free trade agreement — there is only a Canadian way. This has been the government’s approach as well," he said.

The deal still needs the approval of the U.S. Congress, the Mexican Senate and the Canadian Parliament.

"We're not yet at the finish line," warned Trudeau. "What I can say is, that free and fair trade in North America...is in a much more stable place than it was yesterday. We now have a path forward."

No ‘climate change,’ no forced energy exports either

The agreement, as posted on the U.S. Trade Representative's website on Oct. 1, does not appear to contain the terms "climate change" or "global warming" in any of its chapters, annexes or side letters.

However, there is a statement in the environment chapter that says the countries “acknowledge the importance” of “the critical role of forests in providing numerous ecosystem services,” one of which is listed as “carbon storage.”

Forests have absorbed about a quarter of the carbon pollution emitted by humans from burning fossil fuels over the last four decades, according to Natural Resources Canada (although the oceans have done far more work in this regard).

In a major move, NAFTA’s rule that requires Canada to export a certain per cent of its energy production is not in the new USMCA, said Freeland.

“The original NAFTA contained a clause that eroded Canada’s sovereign control over our energy resources, known as the proportionality clause. That’s now gone,” she said.

Groups like the Council of Canadians have complained that this clause guaranteed minimum production levels in the Alberta oilpatch, which they said throws up an ever-present barrier to decarbonization in Canada.

The minister also said the government "fought for, and won, administrative changes that will save the oilpatch more than $60 million a year in burdensome fees and costs.”

The environment chapter commits the group to "co-operate to address matters of mutual interest related to ozone-depleting substances." Such substances, like chlorofluorocarbons, are potent greenhouse gases.

It also says each country will “take measures to prevent the pollution of the marine environment from ships,” something Canada and the United States discussed at the recent G7 meetings in Halifax.

'Air pollution is a serious threat'

The new trade deal says countries “recognize that air pollution is a serious threat” to public health and ecosystems, and that they will make air quality data "publicly available" and seek to ensure it is "easily accessible and understandable to the public."

The three countries, the chapter reads, "recognize the importance of international agreements and other efforts to improve air quality and control air pollutants, including those that have the potential for long-range transport."

The long-range transport of tropospheric ozone, a big contributor to climate change, is monitored by Canada as it can irritate or damage the respiratory and immune system.

But it's worth noting that the Paris climate agreement could also fall under this category, as an "international agreement" that aims to curb an "air pollutant," namely greenhouse gases from fossil fuel use.

While Trump has said he will pull out of Paris, the earliest he can do so is 2020.

French President Emmanuel Macron recently emphasized the link between climate and international trade, when he told the United Nations that France will "no longer sign commercial agreements with powers that do not respect the Paris accord."

The Sierra Club, which bills itself as the largest U.S. grassroots environmental organization, said the deal "includes weak environmental terms that have historically enabled outsourcing of pollution and jobs, fails to make any mention of climate change, and includes special handouts to oil and gas corporations."

"For example, the text 'recognizes that air pollution is a serious threat to public health,' but then fails to include a single binding rule to reduce the air pollution that NAFTA has exacerbated," he added.

"Much of the language appears designed to greenwash the deal, not to rectify NAFTA’s threats to wildlife, ecosystems, or clean air and water."

While Canada and the U.S. have differing views on the importance of the Paris climate agreement, Freeland told reporters outside the House of Commons on Aug. 14, 2017, “we continue to work at all levels of government with the U.S. on the environment...in NAFTA particularly, here I see a real opportunity for us to work hand in hand with the U.S. administration.”

However, the minister stopped short of saying that Ottawa would walk away from negotiations if the term “climate change” didn’t wind up in the deal’s final text — despite pressure from the NDP, who argued at the time that not including climate change in the agreement would be a “red flag” to Canadians.

On Monday, NDP Leader Jagmeet Singh said in a tweet that "with USMCA, we have a new name, but a worse deal."

"From concessions that'll hurt our farmers, to making medication more expensive – this deal is not the progressive solution Canadians need," he tweeted.

Meanwhile, the Conservatives had warned that Trudeau's support for putting a price on carbon pollution would lead to hurdles in getting a deal done.

Later on Monday, Conservative Leader Andrew Scheer also said Trudeau will have to explain "how we have a worse deal than NAFTA."

Asked whether he would have signed the deal, the Tory leader said he wouldn't have found himself in the position of having to sign this particular deal in the first place. “A better question is, how did Justin Trudeau find himself in this position?" he said.

The White House has clarified that the new deal would not result in the removal of steel and aluminum tariffs, that the United States had slapped on Canada on the heels of the G7, citing “national security” grounds.

Freeland had called those tariffs “absurd and frankly insulting” in comments to the press the day after the G7 leaders’ summit wrapped up in the Charlevoix region of Quebec. "We can't pose a security threat to the United States, and I know that Americans understand that. So that is where the insult lies," she said at the time.

But at a press conference outside the White House Oct. 1, Lighthizer called the USMCA and the tariffs “two separate things,” while Trump said they would stay put “until such time as we can do something different, like quotas.”

Steelworkers panned the deal, calling it a “sellout” for Canadian workers in the steel and aluminum industry. The United Steelworkers released a statement saying tens of thousands of families “have been left in the lurch.”

"Canadians expected that an agreement on NAFTA would result in the U.S. lifting the bogus national-security tariffs on Canadian steel and aluminium,” said United Steelworkers Canadian director Ken Neumann in the statement.

“Instead, it appears Canadian steel and aluminum workers are among those being sacrificed in the concessions made by the Liberal government in this deal.”

The new deal preserves dispute−resolution provisions that are contained in NAFTA's chapters 19 and 20 when it comes to countervailing duties and government complaints, the Canadian Press reported.

“Canada has used chapter 19 a number of times, for example, during the softwood lumber dispute, to guarantee fair treatment for Canadian workers,” said Freeland on Monday.

The Council of Canadians has long complained that NAFTA’s chapter 11, a third section on dispute which lays out rules for how corporations can sue states, affect Canada’s ability to protect the environment and the public interest.

But she said the rest of the agreement is “still far away from a deal that protects people and the environment.” Farmers were “once again sacrificed” as dairy market access has been pried open, she lamented.

“We are moving towards a factory farm vision for Canadian agriculture,” Barlow is quoted as stating. “While energy proportionality has been removed, it has been replaced with provisions which accelerate pipeline approvals.”

Freeland and Trudeau insisted Monday that Canada's system of supply management for dairy, poultry and eggs is still intact.

“This agreement is going to be good for Quebecers and Canadians,” said Trudeau. “We do recognize that with regard to dairy producers there are concerns, and once again I can assure you that we have protected supply management.”