Yazidi women face nightmarish healing process. Here's what Canadians can do to help. 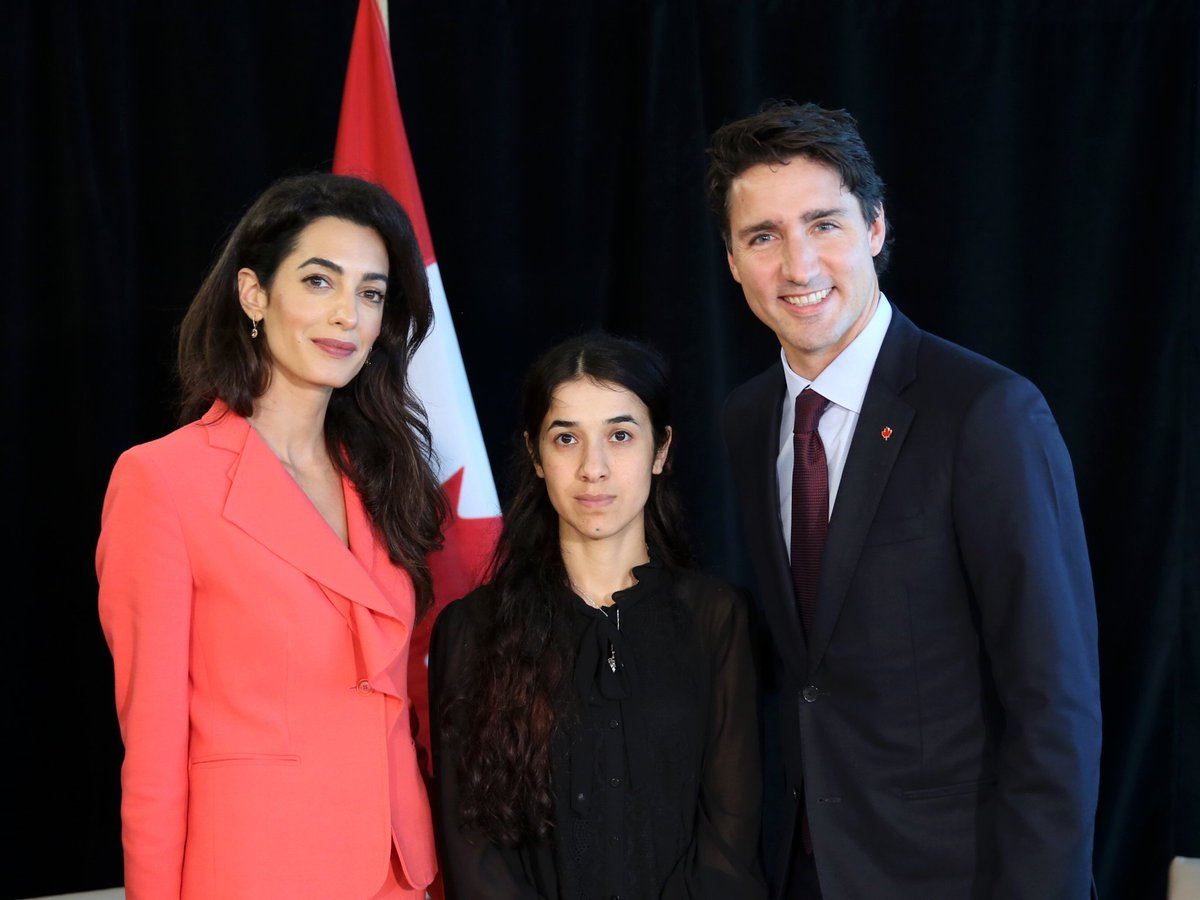 Nadia Murad, a Yazidi woman from Iraq who was forced into sexual slavery by the Islamic State, won the Nobel Peace Prize this year along with Congolese gynecologist and surgeon Denis Mukwege for "their efforts to end use of sexual violence as a weapon of war and armed conflict."

It was a profound moment of recognition for the sexual violence perpetrated against Iraq's Yazidi minority. Over 6,000 women and girls were taken captive by Daesh (Islamic State) fighters, and many remain in captivity. They were forced into domestic and sexual servitude, passed from owner to owner like chattel across Iraq and Syria. Some, he said, were as young as nine and were raped up to 20 times daily.

In Canada, Rev. Majed El Shafie, a former Egyptian refugee and human rights advocate, has been working to aid Yazidi women by lobbying Ottawa resettle them in Canada, getting support from MPs across party lines, including Conservative Michelle Rempel and NDP MP Jenny Kwan.

His organization, the Toronto-based One Free World International, has also worked to free female Yazidi captives directly by bartering to help women escape from captors into safe havens. The organization also helps victims of IS overcome trauma once they arrive in Canada.

"These women are survivors — not just victims," said El Shafie, speaking at the Vancouver General Hospital to a room full of doctors and nurses who had gathered for a talk organized by the Vancouver-based Women Refugees Advocacy Project on September 28.

Although the Canadian government resettled 1,300 Yazidis who were former captives of Islamic State, settlement workers have struggled in the face of the extreme suffering they suffered before coming here. El Shafie stressed that when it comes to Yazidi women and children, mental health support is as urgent and essential as providing shelter.

As El Shafie spoke, a thin, long-haired woman in a brown leather jacket wiped away tears. Adiba, a Yazidi woman who was in IS captivity and sold roughly six times over the course of a year by different male captors, arrived in Canada in 2016, and was still dealing with the psychological damage of sexual violence.

The Yazidi women were described as "the most traumatized group yet to be admitted" to Canada.

Her experiences were a prime example of how Yazidi women struggled in Canada due to misunderstandings.

Several months after arriving, Adiba had a breakdown at home and was taken to the Mackenzie Richmond Hill Hospital in Ontario. El Shafie remembers rushing to the hospital after calls for help, and was horrified to find Adiba being restrained to a bed, surrounded by male security guards.

"They'd tied Adiba's hands and feet to the bed," El Shafie said. "Each hand was tied, each leg was tied, with 10 men around. That's exactly what ISIS used to do before they raped her."

"I didn't think it was proper to do this with me, because of my experience," Adiba commented afterward, her eyes downcast. "They gave me injections that made it so that I couldn't stand up properly for a week." She and El Shafie felt that if she had been allowed to have her family in her room, and female nurses had approached her instead, she would not have panicked or feared for her life.

Eventually, El Shafie was able to get Adiba into weekly therapy sessions with three female psychologists, and has not had another meltdown since last year.

When doctors asked El Shafie what they could have done differently, he said because her information sheet said she was a victim of war from Iraq, they could have considered the likelihood that she had been raped, and de-escalated the situation.

Although the federal government says refugees and asylum claimants have "basic coverage for mental health services" under the Interim Federal Health Program, getting Yazidi and other refugees mental health care is still a challenge. Yazidis are a minority whose language, Kurmanji Kurdish, is not spoken by many experts in Canada.

"Many survivors of Daesh have experienced significant mental and physical trauma," Immigration, Refugees and Citizenship Canada spokesperson Shannon Ker told National Observer in an email. "To assist Service Provider Organizations with the settlement and integration needs of this population, the Department developed a Yazidi population profile detailing demographic, health and cultural considerations of this vulnerable population that was shared with the settlement organizers."

She said some government is working with settlement services to "meet the very acute needs of survivors of Daesh (IS)," with one group in Winnipeg, the Aurora Family Therapy Centre, developing a program specifically for the Yazidi program. According to a recent report, therapy sessions were arranged for Yazidi women and children in Toronto.

But Yazidi women often spend their first months in Canada without anyone ever introducing them to such help. El Shafie stressed that Yazidis aren't going to look up mental health clinics and knock on their door, given the challenges they face adjusting to a new country where they don't know the language.

Children often recover faster than adult women, even though it may take years. Dilveen, a Yazidi girl who courageously escaped her captor by mixing sleeping pills in his drink, now goes to school in Toronto. She speaks English, goes to school and is adjusting well to her surroundings.

Video documentary by CBC on Dilveen, an 11-year-old former Yazidi captive who now lives as a refugee with her family in Canada

The unique problem of sexual slavery

Much has been written about the struggle of Yazidi refugees to resettle.

A March 16 New York Times article about the Yazidi refugees included a quote from a Calgary-based refugee worker, who was a refugee himself and had spent years working to settle vulnerable newcomers. He'd worked with people from Kosovar Albanians to Burmese Karens to Thai refugee camps and Syrians displaced by the civil war.

But "nothing prepared him for the Yazidis," it said. Stories about what the Yazidis went through were so disturbing for resettlement workers that some are forced to seek treatment themselves to cope with vicarious trauma. The Yazidi women were described as "the most traumatized group yet to be admitted" to Canada.

El Shafie pointed to a three-pronged problem which he saw as unique to the Yazidi experience.

"The problem is the act of rape itself. Sex slavery means being sold 16, 17, 18 times. Some of the girls will be used as prostitutes," El Shafie said. "They will be forced to have sex with men around 20 times a night. Many of these girls will commit suicide. They will not be able to function without proper mental health care."

He said another, troubling problem is the lack of support and understanding from society. He remembers being infuriated by some people from the local community asking him why he is helping "ISIS hookers," as though the women had voluntarily agreed to sexual slavery.

The last problem, he said, was so-called "honour-killing," in which family members who bring shame to a family are killed — in the vast majority of cases, female victims are killed by a male family member. "Before we return the girls to their families, we have to really test the family to see if they would accept the girl back or not," El Shafie said.

He recalls a story of finding a young Yazidi woman captured by IS, and calling her brother, the lone survivor in her family, to ask if how he would react if he learned she were alive. The brother told him he would have to kill his sister, to restore the family's honour. El Shafie was indignant. "I told him, as a man, if you were the one who was taken as a sex slave, would you say the same thing?" Because of her brother's reaction, he had to take the woman to a safe home, rather than reunite her with her family.

"In many cases, the survivors come back with children. We had a woman in Canada who was pregnant from ISIS fighters, and she wanted to keep her child. People told her it was the son of the devil. But children don't carry the sins of the father. We can't blame the child. If the mother chose to get an abortion or take him to adoption, that would be completely her choice, but she wanted keep the child," El Shafie said. "We had to intervene because the community completely isolated her."

Part of the process of healing, El Shafie said, was to acknowledge the problem of rape suffered by Yazidi women, and to deal with it properly so that they could move forward in life.

One day several years ago in Iraqi Kurdistan, El Shafie was in a room with recently freed Yazidi captives. He was struck by the young age of one of the ex-captives, who said she was just nine years old and repeatedly raped by adults. El Shafie was asked by her mother not to get too close to her, because the girl was would start screaming if any male figure approached.

Shaken by the sight of the girl, El Shafie went outside to clear his thoughts. When he came back inside, he went on his knees in front of the women and apologized on behalf of his gender, for the abuse that had been inflicted on them by other men.

"Afterward, I felt a little hand on my back. It was this nine-year-old girl," El Shafie recalled. "All she needed to hear was [for a man to say] 'I'm sorry' to start the healing process."

In the years since, he has tried to stress the importance of psychological care for refugees, to help remove the stigma of sexual assault and of mental health treatment.

"We have to reassure the women and re-educate them that there is no shame in talking about this," he said. "There are 45 Yazidi families in Canada. We sat down with some of them and talked about the importance of mental health care. We told them, 'if you get hurt in your arm, why would you go to the doctor? When your soul gets hurt, where do you go?' Same concept."

"We can't expect government to do everything," he said. "Many people will tell you the Canadian government has let the Yazidi community down. Maybe that's true. But not the Canadian people. I saw the bus driver who took a Yazidi refugee family for their first ride and refused to take payment. I saw the cab driver, the babysitter, the neighbour who went and brought food. I saw people who gave them clothes and furniture. I saw the psychologists who took their time to see the women. I saw nurses who just finished a long shift —like 9 a.m. to 9 p.m. — and yet they still come to see the Yazidi women to make sure they are fine."

But he says Canada must deal with the mental health wellness of its Yazidi refugees today if they are to live full lives contributing to society tomorrow. "If the government is smart enough, let's deal with the issue today," he said. "So we don't spend millions in the future. Solving the problem right now will resolve it in the future."

An American becomes a Canadian: 'Welcome to the home that is yours'

Canada to give asylum to 1,200 primarily Yazidi refugees by year end