Saving the world, a pen at a time 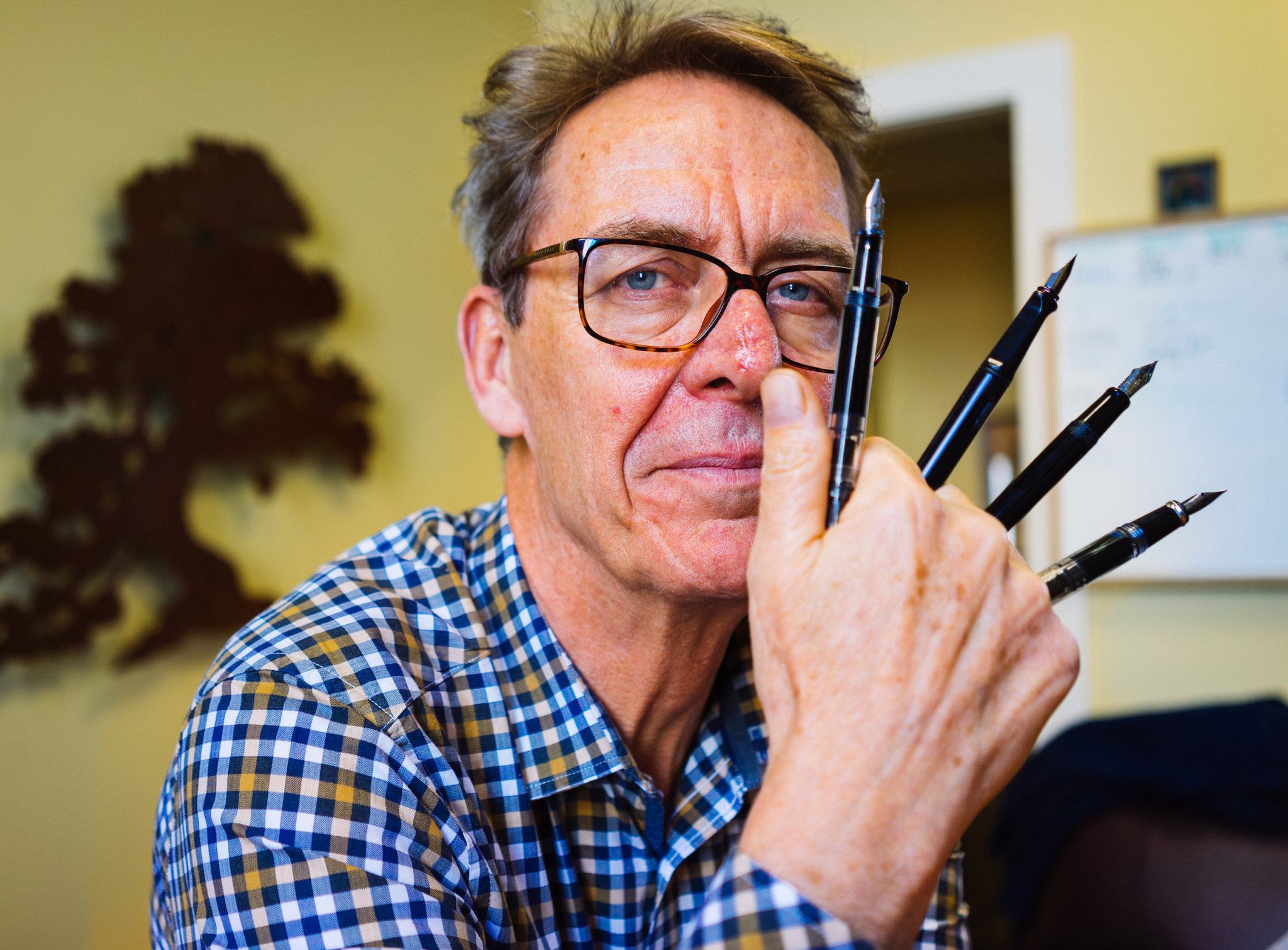 Richard Littlemore displays his range of fountain pens on November 2, 2018. Each pen differs in how it transfers ink and Littlemore uses each for specific purposes. Photo by Michael Ruffolo
Previous story
Next story

Can the earth be saved one fountain pen at a time?

It is, admittedly, a ridiculous question. Fountain pens are, themselves, kind of ridiculous – at least as measured by how quick people are to hurl ridicule upon them. Yet, in an age when the ecologically conscious are supposed to be reducing, reusing and recycling, the fountain pen is the perfectly green alternative to firing a spent BIC into the trash every three or four days (unless you lose it or someone lifts it first).

Okay, perhaps you are not a professional writer. Perhaps you don’t budget to buy 100 cheap rollerballs a year because that’s how many you expect will run out – or walk off – in the course of your daily note taking. In that case, you might not consider disposable pens in the same obnoxious category as plastic bags, straws, McDonald’s wrappers and Starbucks cups: i.e., garbage that is completely unnecessary.

But most pens are unnecessary garbage. The BICs, the Sharpies, the Uni-ball roller pens, the Staedler Fineliners: all are designed to work until they stop, and then to travel straight into the landfill. The slightly nicer ones – complicated concoctions of metal, plastic and ink paste of indeterminate toxicity – are destined to sit there for millennia. Pointlessly.

I started to worry about this six or seven years ago (admittedly late in a writing career that now exceeds four decades). I started thinking about the garbage dump mountain of cast-off ballpoints, all smudged with my inky fingerprints. So, late in 2011, I walked through the door of the Vancouver Pen Shop and asked what they had that was, you know, ecologically light-footed. I envisioned something in an easily recycled bamboo, with vegetable-based ink and a special decomposing nib. But Fernie, a Pen Shop employee who gets more charming as you get to know her, picked up a fountain pen – an instrument that is, as I have already mentioned, ridiculous by its very nature – and made a polite effort to pass it to me.

Disturbingly, she didn’t laugh back. Regardless that she works in retail – a world where I thought frontline staffers were encouraged to pander to their customers’ every whim and bias – Fernie sighed a little too obviously, which I interpreted to mean that she found me, essentially, trifling. She then collected herself and said, patiently, that she was only too happy to sell me boxes and boxes of short-life bamboo ballpoints, purported “green” alternatives boasting, say, 23 per cent recycled content. But, she went on, if I was truly serious about reducing my ecological footprint, the only sensible option was to adopt an almost infinitely refillable fountain pen. That would involve one final pen purchase followed by a lifetime of recycling bottles of vegetable-based ink. Perfect.

I don’t want to admit to being easily humiliated or intimidated, but 20 minutes later, I walked out of the store with a brand-new, matte black Lamy Safari, a Z24 converter (so I could refill the pen instead of using expensive and wasteful little plastic cartridges) and a bottle of ink. I figured that I would use the pen to do the Globe and Mail Sudoku puzzle until I got the hang of it, and then, perhaps in a couple of months, I might try taking some notes.

Here’s the twist. Adapting to the pen was a piece of cake. Fernie had recommended this particular Lamy because it has a triangular grip that’s easy to hold in the optimal position; apparently, the Safari is the pen they give to European children who are just learning to write. Using it was so easy that I also unearthed an old, regular-grip Cross pen that a friend had given me as a gift when I stood as Best Man at his wedding. I went back to the Pen Shop, got a converter for that pen, too, and soon enough, I was using one or the other of those not-so-ridiculous instruments more than 90 per cent of the time (even in the face of gathering ridicule).

Fountain pens: only a 'luxury' item?

The statistics suggest that I am part of a trend. As the U.K. Telegraph reported in March, “Fountain pens are back in fashion.” The Tely went on: “In 2016 the fountain pen had the largest market share of the luxury pen market in the world, holding 38 percent,” and “According to market research company Technavio, the luxury pen market is expected to expand by a further five percent up to 2021.”

Michael Pons, president of the LSF Group, the largest distributor of high-end pens in Canada, says the story is similar in this country. After a flat spot in the 1980s, the fountain pen market enjoyed “steady growth” through the ’90s and 2000s. And while Pons said pen makers were anticipating another possible decline as the baby boom market began to age out, instead, they have been excited to find a whole generation of new users in the crucial 18-to-30 age category.

For the ecologically engaged, however, there is a catch in that enthusiastic reporting: it’s all about the “luxury pen” market. Most of the fountain pens in questions are status symbols, collectibles or what Pons calls the “fine writing instruments” that people choose for journaling, bullet-journaling or, sometimes, sketching. These are beautiful things that you use to create beautiful things. Lovely to hold and charged with a rainbow of inky colours, these are the pens that people buy when they don’t actually need a pen – or, where collectibles are concerned, when they don’t need anything at all. This is especially the case in the high-end market. You can easily drop $3,000 to $4,000 on a limited edition Mont Blanc. Or, at the far end of consumer lunacy, Caran d’Ache recently marketed a diamond-encrusted model for a cool $1 million. These are not environmentally conscious alternatives; they are the tasteful accoutrements of those who consume for pleasure and attention. That being the case, the positive movement in fountain pen sales may reflect the same sector-wealth that drives a certain part of the Tesla market – it’s just another pretty thing to park in your four-car garage, next to the luxury SUV that’s never been off road.

Even at the lower end of the market, there is a push to encourage collectors to bulk up – to buy lots of pens that they don’t need and will seldom use. For example, Pons says that Lamy has stimulated demand by releasing new pen colours a couple of times a year, coaxing buyers back into the store to over-fill their pencil cases on the basis of style and desire, rather than need or – if anyone thinks about this at all – utility.

Another worthy question is whether a fountain pen is, in fact, ecologically benign. (Hint: not really.) For this, I defer to the self-styled J.D., an Australian blogger who says that he has a Ph.D, an MBA, and “a passion for fountain pens.” J.D.’s blog is called Pen Economics and he has used the platform to report a quite-thorough assessment of the cost and complications of fountain pen inputs. The good ones are hard to make, require more energy and include a host of different components that must be mined or refined. This he compares to the simplicity and easy disposability of, say, a BIC Cristal, which uses just five grams of plastic and a small amount of metal for the tip. J.D. then pushes the conservationist agenda even further, saying,

“I’m not even convinced that ballpoints are the most sustainable choice. Staples also stock(s) a 48-pack of pencils for $5.99 ($0.08ea), which is an even better option. But the most environmentally friendly option — by far — is using a phone or laptop which you already own. By refusing to buy any pens at all, the only cost is electricity — probably only an extra $1-2 per year, even with your carbon emissions offset.”

So: as ever, it’s complicated. And seeking an option that is perfect – ever the enemy of the good – proves challenging and impractical. I can’t take shorthand on my phone or type nearly fast enough on my laptop. But the decisions we make are seldom between what we’re doing today and the ideal alternative. Few of us are in a position to trade in a Ford F-250 for a bus pass, never again to blight the road with a personal automobile. But there is still merit in making incremental improvements, whether by switching to an electric car or, seriously, to a refillable fountain pen.

And some pen makers seem to be figuring it out. My current favourite implement is the Taiwanese TWSBI Eco (notice the clever “eco”-conscious branding!). It’s a no-cartridge, piston-fill pen with a gigantic reservoir. You can run this baby hard all day and find it still sloshing mostly full when you get back to office for a refill. It’s attractive and practical, and your average ballpoint-pen thief will twist off the cap and drop it like a radioactive potato when they see the fountain pen nib. Even better, I own neither a pocket protector nor a collection of ink-stained shirts; it appears that the quality pen makers have conquered the leak issues. And with a little care and a handy tissue, you don’t even have to get ink on your fingers when you’re in refill mode. You just dip it, twist it, wipe it and keep on writing.

Bottom line: no single fountain pen is ever going to save the earth. Switching to one is a small gesture. But big journeys are accomplished in little steps, and this step is simple, convenient and (avoiding the Caran d’Ache over-indulgences) cost effective. So, try it. Find a pen shop and scratch our your signature with a sweep and a flourish. You might like it. And you might soon find that the future, still uncertain, will be a few pen strokes further from Armageddon.

By Meeru Dhalwala | News, Culture | November 25th 2019
The climate and the cook

I have a fountain pen that I

I have a fountain pen that I haven't touched in years. The problem is that I'm left-handed. It's a left-handed fountain pen, but the truth is that it just doesn't work that well. I suppose pulling a nib will always get the ink out more effectively than pushing it will. Perhaps the best ecological solution for us lefties is for society to put up with our mirror-writing. (We have no shortage of mirrors, after all!)

Failing that, there are always reloadable ballpoint pens, which is what I mostly use. Since you still have to throw out the exhausted reloads, they're not as green as fountain pens, but then, we're only, what, ten percent of the population?