By Michael MacDonald in News, US News, Politics | November 19th 2018 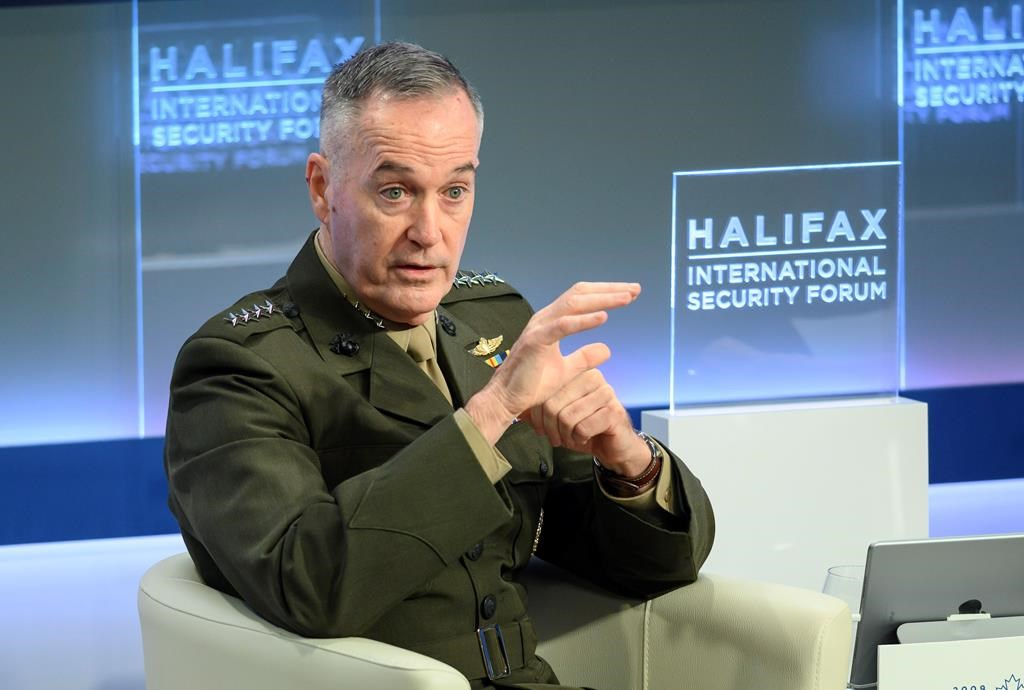 General Joseph F. Dunford, Jr., a United States Marine Corps general and the 19th Chairman of the Joint Chiefs of Staff, speaks at the Halifax International Security Forum in Halifax on Nov. 17, 2018. Photo by The Canadian Press/Darren Calabrese
Previous story

The highest-ranking military officer in the United States is insisting U.S. troops will not come into contact with the thousands of migrants from Central America heading toward the U.S.-Mexico border.

U.S. Gen. Joseph Dunford, chairman of the Joint Chiefs of Staff, made the comment Saturday at a defence and security conference being held in Halifax.

Dunford, a key adviser to U.S. President Donald Trump, said the troops recently dispatched by the president to deal with a caravan of asylum-seekers have been ordered to help police and border patrol agents.

"The tasks that we are providing are in support of the Department of Homeland Security," he told delegates to the Halifax International Security Forum.

"Nothing that we are doing is illegal. We looked at that very carefully."

Earlier this week, the caravan started arriving in northern Mexico.

Dunford said his troops are providing engineering expertise to reinforce points of entry, and they are offering logistical and medical support, using helicopters to get the job done.

He said the main role of U.S. troops will be "filling capability gaps ... with military capabilities."

"We are not coming in contact with the migrants," he said. "Our job is not to deny access of migrants to the United States."

The U.S. military is already using cranes to install panels of metal bars at the Tijuana entry point, which is on Mexico's border with California.

However, most of the troops are in Texas — hundreds of kilometres away.

The caravan has been travelling north for the past month, sparking debate across the United States about who should be granted entry.

"It's too much security to confront humble people who just want to work," Ulloa, a 23-year-old electrician from Honduras, told the Associated Press.

On Friday, people walking through the border crossings into Mexico passed by a pair of Marines installing razor wire above a turnstile.

The 24-year-old soldier from Pittsburgh spent nine months in Afghanistan.

"It's very different over there, obviously," Zeigler said. "It's a lot more dangerous."

In Halifax, hundreds of defence and security experts from around the world have gathered this weekend to discuss everything from espionage and terrorism to Russian meddling and North Korea's threat to world order.

High-level discussions were being held at two separate conferences in the port city: the Halifax International Security Forum and the NATO Parliamentary Assembly.

The forum, which is marking its tenth anniversary in Halifax, has attracted 300 delegates, including diplomats, scholars, U.S. senators, business leaders, military members and security analysts.

Meanwhile, the NATO Parliamentary Assembly has attracted 600 politicians from the 29 NATO member countries, as well as delegates from partner countries.

The NATO conference will draft resolutions dealing with several hot-button topics, including Russian interference with democratic elections, and how terrorists use encrypted messages on the dark web.