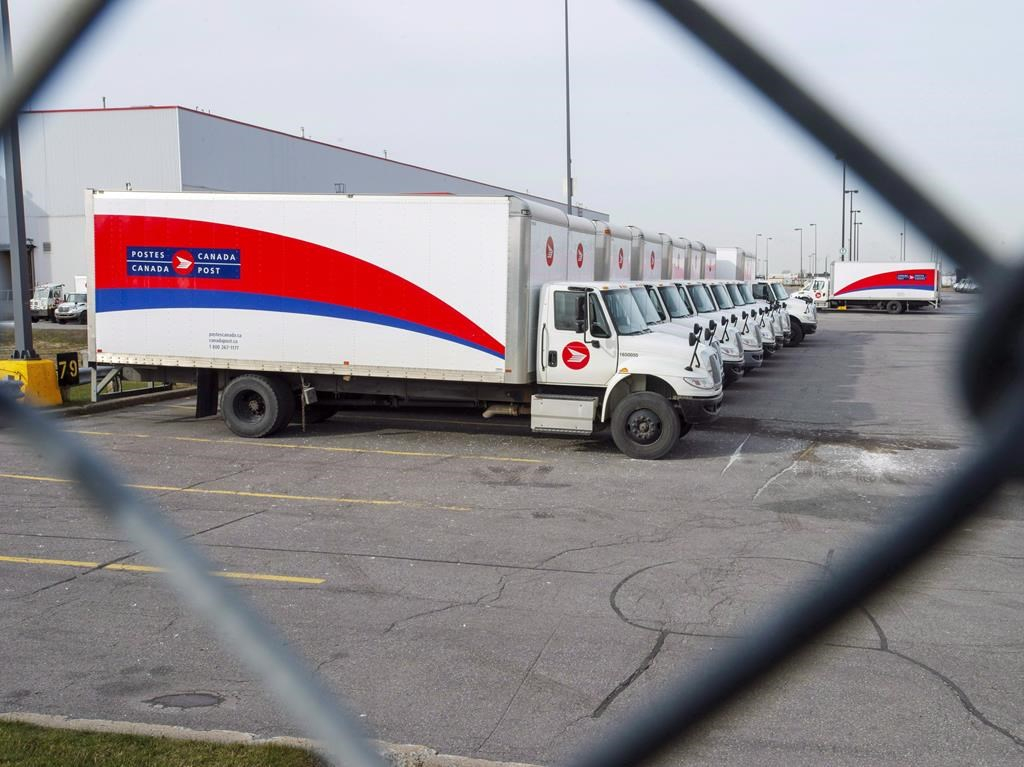 Idle Canada Post trucks sit in the parking lot of the Saint-Laurent sorting facility in Montreal as rotating strikes hit the area on Thursday, November 15, 2018. File photo by The Canadian Press/Ryan Remiorz
Previous story
Next story

Senators are to resume a special sitting today to examine a back-to-work bill that would force an end to rotating strikes at Canada Post as the walkouts enter their sixth week.

Bill C-89 was debated in the upper chamber on Saturday after the Liberal government fast-tracked the legislation through the House of Commons.

But despite an initial plan to continue debate — and possibly hold a vote — on Sunday, senators chose instead to give themselves an extra day to digest hours of witness testimony on the labour dispute.

A Senate official says final debate on the legislation is expected to begin by mid-afternoon (2 p.m. ET), likely followed by an early evening vote.

The bill could receive royal assent and become law a short time later, which would force striking postal workers back to work by noon on Tuesday.

However, the legislation could be delayed by a number of factors, such as amendments.

Canada Post and the Canadian Union of Postal Workers said their negotiators remained at the bargaining table Sunday, hoping to reach contract agreements in advance of the bill's passage.

Negotiations have been underway for nearly a year, but the dispute escalated more recently when CUPW members launched rotating strikes Oct. 22.

Those walkouts have led to backlogs of mail and parcel deliveries at the Crown corporation's main sorting plants in Vancouver, Toronto and Montreal.

Picket lines were up Sunday at Canada Post facilities in northern Ontario, as well as in parts of British Columbia.

CUPW vowed to continue the walkouts Monday to back its contract demands.

The union wants better pay and job security, guaranteed hours for its 8,000 rural and suburban carriers, and equality for those workers with the corporation's 42,000 urban employees.

CUPW also wants Canada Post to adopt rules that it says would cut down on workplace injuries — an issue the union has said is now at a "crisis" level.

The union's national president has called the back-to-work bill a slap in the faces of Canada Post employees and accused Prime Minister Justin Trudeau of turning his back on postal workers.

"It's unacceptable for any government to violate workers' charter rights."

Palecek said the union would decide this week how to fight the back-to-work bill once it becomes law, adding "all options" were on the table.

The former Conservative government forced an end to a lockout of postal workers during a 2011 dispute by enacting back-to-work legislation, which was later declared by a court to be unconstitutional.

But the Liberal government's bill is "different," Labour Minister Patty Hajdu said shortly after the legislation was tabled in the Commons, in that it does not impose immediate outcomes affecting postal contracts.

The legislation would give a mediator-arbitrator appointed by the government 90 days to try and reach contract settlements. Failing that, a settlement could be imposed either through a decision from the arbitrator or by choosing from one of the final proposals put forward by Canada Post or CUPW.

Once enacted, Bill C-89 would impose fines of between $1,000 and $50,000 per day on anyone found in contravention of the Act, and up to $100,000 per day against Canada Post or the union if they are found guilty of violating its terms.

Canada Post said it expected to make about 30,000 deliveries of parcels to Canadians over the past two days — a far cry from the 500,000 deliveries that a company spokesman said was normal for a late-November weekend.

"Weekend deliveries occur during the holidays to keep pace and balance the workload through the week," said Jon Hamilton.